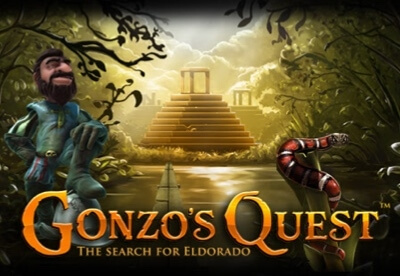 Almost a decade on from its initial launch in 2010, Gonzo’s Quest still remains one of the most popular video slots in existence. Despite its years, NetEnt’s defining classic stands strong against its competitors even in today’s technology driven gambling world. In fact, the game’s sublime 3D graphics put many new releases to shame, and the slot’s satisfying gameplay continues to attract fans in their droves. The following review aims to uncover the secrets behind Gonzo’s unrivalled popularity and reveals the top online casinos for enjoying the bountiful treasures of this iconic adventure.

The game begins with a rich cinematic introduction to Gonzo, a likeable, bearded explorer based on the 16th century historical figure of Gonzalo Pizarro. Alighting his ship in mystical Aztec waters, the character sets off through the jungle on a quest to discover the location of the legendary Eldorado and unearth its hoards of gold.

The slot settles on an archetypal backdrop of ancient temples and cascading waterfalls, with Gonzo cheering wins and performing celebratory dances on the left of the screen. The reels are filled with traditional South American icons of varying colours, three of which take the form of animal motifs, with four higher winning symbols comprising human masks. The golden square represents the Free Fall scatter and the wild, which can be substituted for any symbol, displays a question mark in its centre.

Gonzo’s Quest takes the pretty standard format of a 5 x 3 grid with 20 paylines. However, in typical NetEnt fashion, the game changed the face of online slots by replacing customary reel spins with the now common, and hugely popular, Avalanche feature. Winning combinations cause stones to crumble, together with entertaining 3D explosions and sound effects, with new symbols falling into the spaces left behind and increasing the possibility of multiple wins.

In keeping with its revolutionary status, Gonzo’s Quest also holds the title of NetEnt’s first ever mobile slot, which means fans can enjoy instant play on any device, with the game performing equally as well on mobiles, tablets and desktops.

Aside from the intriguing storyline, exotic setting and stunning visuals, the slot offers its players a couple of features to keep things interesting. They are as follows:

Even in the base game, a multiplier can be activated simply by landing a winning combination. The bar at the top of the playing field indicates the level of multiplier, which begins with x1 and progresses through x2 and x3 to the highest level of x5. The multiplier resets once an Avalanche fails to produce a successful line.

This lucrative feature is the equivalent of a Free Spins bonus round. Landing three or more Free Falls symbols will herald a flush of pan pipes and grant entrance to the golden steps beyond. Lucky punters who reach this round are awarded an initial prize of 10 free spins, which can be re-triggered within the game. What makes this feature special is the added excitement of a jacked up multiplier, offering x3, x6, x9 and a mammoth summit of x15 maximum. This potential for sizeable jackpots certainly enhances the slot’s appeal and goes a long way to explaining Gonzo’s continued attraction.

NetEnt’s smash hit boasts an engaging simplicity, ensuring slots fanatics across the globe can dive into Gonzo’s adventures without any hassle or confusion. In addition, the game foregoes an overload of features for a select few favourites, notably that mouth-watering multiplier in the Free Falls bonus round. With super slick animation, a great soundtrack, exhilarating gameplay and the opportunity for epic wins to boot, Gonzo’s Quest is set to retain its legendary status and entertain enthusiasts for years to come.

Which online casinos have Gonzo's Quest?