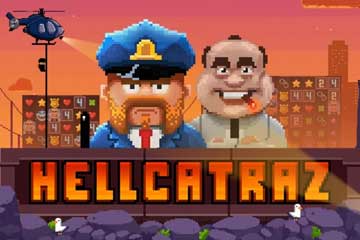 With the Hellcatraz online slot, you get taken into an 8-bit stylized version of one of the most famous prisons ever. This island prison is historic because of the attempts to escape and the mythology surrounding some of the only people to ever successfully do it.

The whole mythology of Alcatraz Island is about a prison that used to operate there. While it hasn’t been in operation since the early 1960s, the island location off of the coast of San Francisco has been the setting of plenty of movies, television shows, books, video games and more.

With the Hellcatraz video slot, Relax Gaming made this site their own with an atypical graphics style and approach to gameplay.

We obviously need to talk about the pixelated, 8-bit style of graphics used in this title first. That’s because it’s the first thing you see and what we are sure will be the first thing to catch your attention. We think it’s really interesting to see the interplay between the seriousness of the theme itself and the juxtaposition of 8-bit graphics beside of that. Additionally, it creates an interesting feel that lets you have fun with something that otherwise would be super serious.

The gameplay has a similar feel to it. They’ve used a theme that’s actually kind of horrific and managed to make it fun. They did this through the usage of a seriously high-action format. However, they also used some game mechanics based around collection and other ideas that give it a different style than what you might be used to. Overall, it all fits the theme pretty well, but it still brings a different type of feel than you’d expect based on the overall motif of the game.

Next up, we need to make sure that players understand the way the format works. We say that because it’s not exactly typical. From first glance, you might think it’s cluster-based. However, it is not. Here’s what you need to know to get started:

Something to understand here is that the mechanics make the volatility above-average in the short-term but below-average in the long term. This is because of atypical collection mechanics that reward you for playing this title over and over. We’ll get more into how to adjust to that down below.

When we talk about wins in this game, you only need to keep up with the overall amount you’re wagering. Relax Gaming apparently didn’t think it was a good idea to go to a coin-based win system. We can’t say that we blame them considering this title has over 46,000 ways to win. That could definitely lead to some atypical bet sizing to say the least.

The feature set for the Hellcatraz online slot is super interesting because it’s pretty atypical. However, that means most players won’t have a frame of reference for how the mechanics work. To this end, we want to make sure you have the opportunity to read over the following breakdowns of how this game really works. We’ll show you everything you need to know to get started and have a great time.

A large orange “W” is the wild in this game. It has a great 8-bit style to it that really shines with the type of font used. It offers the best payouts in the game along the following lines:

Since these wilds make appearances on all six of the reels, they help to get a lot of extra wins. That’s especially the case with so many rows in this game and the “all ways” win system. A single wild can help to be a part of multiple winning combinations at the same time. They don’t even have to be for the same symbol sets, which really just compounds the value that they offer.

A really important mechanic that drives so much of the gameplay is the cascade feature. You start with a regular situation where you can earn payouts through the way we described up above. However, after each win, those winning symbols will disappear. This creates a set of spaces where those symbols were located for new symbols to fall down in place.

Once the board is filled back up with symbols, you get yet another chance for wins. However, this process can actually repeat itself several times. The end result is that you have opportunities to get several wins in a row with multiple cascades.

Additionally, it’s critical for us to point out how the format plays into this feature. In a compounding action, it’s much easier to get wins with such a large layout combined with the “all ways” approach. As a result, running up several cascades in a row is much more likely than in most other titles.

The cascades also play a part in the Mystery Reveal feature in the Hellcatraz video slot. You’ll see various spaces on each spot behind bars with a number in the middle. After each cascade, that number will go down one amount at a time. However, if you count all the way down, they will open up to all show the same randomly chosen symbol.

You actually have two game modes to choose from for this feature:

The latter option has a lower volatility overall than the first. However, they both offer the same long-term payout rate. That means your choice between the two is largely a matter of personal taste.

Keys are collected during your spins to fill a meter. Once you fill that meter, the Hellcatraz free spins mode is activated.

During this mode, the mystery symbols reveal themselves immediately at the beginning of each spin. Additionally, you can get extra spins added to your total just for triggering two cascades in a row.

Something cool about this game is that the meter doesn’t reset just because you switch bet sizes. We’ll show how to take advantage of that further down below to a certain extent. Instead, it takes the average size of your wagers that were used to collect the keys in the first place.

How to Win at Hellcatraz

In the beginning of playing this game, you can treat it as a high-volatility title. That’s because the key collection feature is way off, and you can take quite some time to activate the feature depending on how lucky you get with collecting keys early on. However, as you get closer to filling the meter, the volatility drops down to about average because you’re so much closer to hitting the extra value from the Super Free Spins mode. It’s not that different than waiting on the free spins mode to hit in games like Buffalo King Megaways.

We suggest adjusting to this by using a lower bet size than usual until the meter is about halfway full. Going with something that’s at around 33 to 40 percent lower than the bet size you’d normally be comfortable with isn’t a bad place to start. This also gives you time to decide if this title is you before sinking a bunch of value into it without ever cashing that value back out in the form of the key collection.

The guards are the top regular symbol in the Hellcatraz video slot. They earn you 2x for six of a kind. Additionally, keep in mind that these payouts are multiples of the overall amount wagered. Inmates are up next with a 1.2x payout for six of a kind combinations.

From there, the hilarious shark with the gold tooth pays 1x for six. Additionally, you can get six of the badge or the handcuffs for payouts of 0.8x or 0.6x, respectively. At the lower tier of pays, the win is 0.4x for six of the yellow star, red heart, green clover or purple diamond symbols.

When compared to other online slots with related prison concepts, the Hellcatraz online slot differentiates itself in a number of areas, graphically and in terms of gameplay, instead of really just falling in line with the sub-genre. Also worth noting, the action-centric style of gameplay with over 46,000 ways to win isn’t something you find everyday.

A variety of special features can be found in this game, which is a fact we can’t assume for a lot of the competition, and as a result of the wide attraction from a whole lot of people, this game is a great part of Relax Gaming’s portfolio. We also want to point out that the presentation and feel of this title with the 8-bit style gives an aesthetically pleasing but atypical tone that’s a lot of fun.

Which online casinos have Hellcatraz?

What is the Return to Player (RTP) for Hellcatraz?

The Hellcatraz RTP is 96.3%. An RTP of 96.3% puts Hellcatraz among slots with an average Return to Players. To be a high RTP slot it would have to be 98% or more.