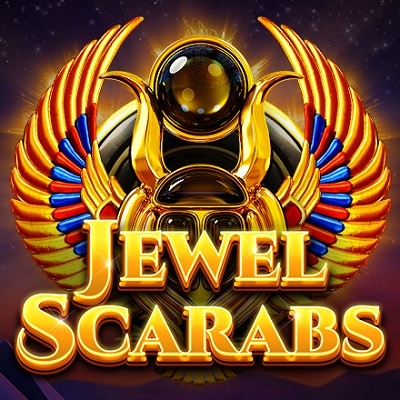 The Jewel Scarabs online slot by Red Tiger Gaming brings players out into the sands of Egypt with what is obviously a scarab-based theme. The features are really serious in this game and all center around wilds and wild multipliers with a bonus feature that has a different spin on the free spins idea.

An Introduction to Jewel Scarabs

It’s no secret that there are a lot of Egyptian-themed online slots out there, and any players who have been around for a while can tell you that. Red Tiger Gaming is obviously aware of that as well, but you can tell that they made the Jewel Scarabs video slot in a way that it would stand out from the crowded sub-genre.

This game’s graphics are solid, but it’s the gameplay that puts it over the top with features that work differently than anything we’ve seen before.

On the visual side, it’s a game that’s very decorative with pyramids, sand and a beautiful sunset over the dunes in the background. The symbols on the reels are very detailed, and that even goes for the card rank symbols.

When it comes to the gameplay, the pay table as a whole is pretty balanced, but it’s the feature set that is getting the most attention here for most players, most of the time.

The layout is a bit of a throwback to some older styles of video slots, but it works well with the feature set and still provides a ton of opportunities for action. Here’s what to expect:

Additionally, it’s worth pointing out that all payouts in this game are multiplied by the total bet size instead of any kind of payline-centric value. If you’d like to know what the equivalent values would be if this was a payline-based win system, you can multiply these numbers by nine.

The feature set is really what shines in the Jewel Scarabs online slot. It’s handled in a way that we’ve not seen before, which is a hard thing to do with how many online slots we’ve seen over the past couple of decades. Here we’ll break down everything you need to know about how these features work and how they give you value.

The scarab symbols are wild, and they’re largely the most important symbol in the game. Their payouts are listed as follows:

The payouts are a little uneven in terms of not ending in round numbers, but that’s part of the play in this game on the number nine along with there being nine paylines.

There’s a really cool feature that plays into the scarab theme that happens when you get a winning combination with any wild symbol in it.

Wild symbols that are a part of a winning combo will start flying until they land somewhere at random on the game board for the following spin.

What’s even more interesting is that these scarabs will continue to fly around and keep helping you to win as long as they are a part of winning combinations. Moreover, there’s no limit to the number of scarabs that can fly around at one time.

The really important thing to understand about this is that winning combinations that consist just of scarabs are worth a lot more than the payouts listed above would otherwise indicate. This is because they will all take off flying and give you wilds in random positions for the following spin.

The wild scarab also acts as a scatter for the purposes of activating the Golden Spins bonus feature. You’ll need at least three scarabs anywhere on the game board to activate this feature, but when you do, it’s time to get ready for some serious value.

During the Golden Spins bonus round, you get a set of free spins where all scarabs that land on the game board (including the three or more that triggered the feature) will stay sticky on the grid until the feature is over.

Inside of this free spins mode, the wilds, which already have a tremendous amount of value, take on yet another element of depth that can help to give you even more tremendous wins. This happens because the wilds become wild multipliers, and each time a wild is a part of a winning combination, its multiplier value increases by one.

Note that these multipliers hold for the entire length of the free spins mode.

It’s clear that this feature mode has a whole lot of chances to win some really top-heavy wins, and that’s one of the reasons why it’s the biggest thing that contributes to the volatility of this slot.

How to Win at Jewel Scarabs

As we mentioned above, the volatility of this game is in the medium to high range when compared to other non-progressive jackpot slots. As a result, the swings in the Jewel Scarab online slot are a bit on the high side in general.

If this isn’t something you’re down for, then you have a pretty good adjustment that you can make, but it takes two parts. First, you’ll want to lower your bet size by a setting level or two. Second, you’ll want to speed up your play compared to how you would normally play, and the autoplay option can help with this.

The idea is that you’ll get in about the same amount of total wagers as you would normally with more spins during your session combined with a smaller bet size. The difference is that the volatility will be smoothed out quite a bit as a result.

The jackal symbol pays 180x for five, and the red cat gets you a win of 135x for five on a payline. Five of a kind wins of the bird or the Eye of Ra will give you payouts of 90x or 72x, respectively.

On the lower end of the pay schedule, we have five different card rank symbols that have been decorated to fit the Egyptian theme really well. The yellow A gets 45x for five, and it drops down to 36x for five of a kind combinations of the red K. Wins ranging from 27x to 18x are available for the Q, J and 10 symbols as well.

This is one of those games where Red Tiger Gaming have shown that they understand how to push the envelope when it comes to feature sets and gameplay styles in the online slot world. As a result, you get a really innovative experience within a theme that most players are comfortable with.