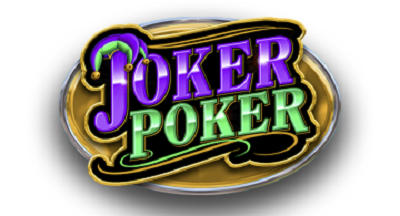 Joker Poker video poker is a single wild card variant that is one of the most popular titles found in both online and land-based casinos. This game gives you a bit of extra flexibility compared to non-wild titles without giving you as much strategy to have to learn as games with several wild cards in the deck.

If you grew up playing poker with family and friends for pennies or beans, then you probably played some multi-person poker game where there were jokers in the deck that were wild.

The Joker Poker style of video poker is set up to feel a lot like these games in the sense that there is a single joker in the deck that is wild.

A lot of people gravitate toward this game, compared to something with no wilds like Jacks or Better, because it offers more chances to make better hands while also making it easier to pick up pairs at the same time.

With that said, it’s also the version of video poker that has the most number of commonly accepted styles at three, and those come with three different types of pay tables.

A Brief Overview of Why Joker Poker is Important

The history of Joker Poker just falls right in line with the rest of video poker history in that games were originally invented in the late 1800s and early 1900s that used mechanical reels like slots to try to make poker hands. Later on, the company that would become International Game Technology made a big push for video poker games, and Joker Poker was one of those.

However, in today’s industry, Joker Poker is important for a different reason. There are two main camps of video poker games in the genre: wild card games and non-wild games. The kicker is the games with wild cards almost always have at least four, which creates a very serious difference in play style compared to the non-wild games.

Joker Poker video poker is different in that it only has a single wild. This creates a “bridge,” so to speak, between the two sub-genres so that players don’t really have to absolutely pick one over the other. In essence, it gives you the flexibility of the other wild card games without all of the incredibly deep strategic complications that come with it.

This is a game based largely around five-card poker hands with small changes based on the existence of a wild card. However, the gameplay procedure itself is separate from that and remains the same no matter which of the three major pay table styles you’re working with:

This gameplay is based largely around the concept of five-card draw poker, one of the most popular forms of poker played by individuals prior to about 1985, so it’s easy to see why it became the basis for this style of game.

The hand rankings for online Joker Poker machines are a bit different than their non-wild cousins because you get some extra hands thrown in there that you won’t see without wilds.

There are two other major variations: Aces or Better is one of them, and Two Pair or Better is the other. These refer to the lowest paying hands in the game, and the remaining pay tables are similar with slightly larger payouts for certain hands to make up for the absence of paying hands from the lower end of the pay table.

There are some variation in pay tables for the three styles that we have described up above, and it’s important to understand the differences in how they work because that influences the best possible payouts that you can get in each individual game.

Here are the best pay tables you can generally expect to see for each of the three major variations:

Note that these are the best possible payout rates you can get for the best pay tables that you can normally find online. Unfortunately, there’s not much consistency when it comes to pay tables for this game’s variations like there are for other styles of video poker, so you mostly have to just work with what is out there.

We have a Joker Poker Video Poker Strategy Guide here that covers all of the basics. However, the overall thing to understand is that you have to break situations up into two key scenarios: You start with a joker, or you do not.

With non-wild hands, you play in a way that’s pretty similar to something like Jacks or Better, so if you have a foundation in that style of the game, then you’ll be in good shape to transition over to this one. There are some important changes, but most hands play similarly except for certain types of situations.

When you have a joker in your hand, however, then things get a bit more complicated, and there’s not really any other game that has something quite like what the strategies look like here. For these scenarios in particular, you’ll need to study this game specifically to get better.

We’ve mentioned previously that there are three styles of Joker Poker available: Kings or Better, Aces or Better and Two Pair or Better. Picking which of the three you’d prefer to play comes down to a few key pieces of information:

There’s a very important place for Joker Poker in any online casino’s overall portfolio. It has a bit more depth than Jacks or Better without being overwhelming with a high number of wild cards like Deuces Wild. That makes it a great stepping stone for players who are looking to make a transition for one to the other.

Which online casinos have Joker Poker?