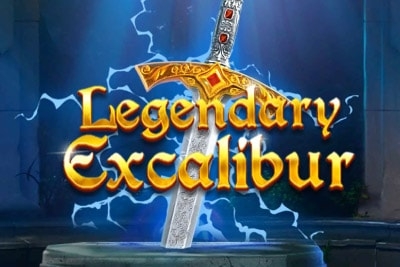 The Legendary Excalibur online slot by Red Tiger Gaming centers around King Arthur’s mighty blade of truth and righteousness. It’s the key to the bonus features in this title, which is filled with a low-volatility and high hit-rate style of action that appeals to a wide range of players with wilds, re-spins and other goodies on the reels.

An Introduction to Legendary Excalibur

In the stories of King Arthur, something that can never be missed no matter which version you’re hearing is the importance of his sword Excalibur. Red Tiger Gaming showed that they know the importance of this sword to the legend in the Legendary Excalibur video slot.

Instead of Arthur being the focus of the game, it’s his blade that becomes the centerpiece of the action instead.

The action happens with the reels in front of a forest grove setting with light coming down through the limbs to create a magical feel to the setting. The background looks great, and the symbols on the reels fit the concept perfectly.

While this is a title that looks great, it’s the gameplay that’s the real star with a focus on a high hit-rate and a low volatility for a ton of action without having to worry about so many big swings.

The layout for this title is set up in a way to work with the feature set to give you plenty of ways to get paid. A focus on an increased number of small and medium wins leads to the following format:

There are a couple of other things to know as well. First off, this game’s volatility is down on the lower end, so you can expect the game to hit more often but for your average win to be smaller to compensate. Additionally, all wins in this game will be described as a multiple of your total bet size instead of worrying about how much is being wagered on each payline.

In what follows, you’ll see how the above format fits really well into the Legendary Excalibur online slot’s feature set to really deliver on the gameplay side of things. Every aspect of the feature set meshes well into how the game is set up to give players a particularly immersive style of play.

There are two ways that you can get wild symbols in this game, but they both pay the same. One is for the stacked version, which is the sword Excalibur and appears three symbols high. The other is a glowing amulet that appears in the normal size.

Here are the payouts for the wild symbol combinations no matter how you get them:

Keep in mind that these wins pay in both directions but that you’ll get the single best win available in each direction at the same time. If you have a wild combo from one side, that can mean that you have a different combination that pays better from the other, for example, just depending on how the symbols fall.

The main bonus feature centers around the sword Excalibur, which probably isn’t surprising considering the name of the game.

The Legendary Excalibur Re-spin Feature starts when you get the Excalibur symbol to land somewhere on the reels where it covers all three positions on one of the five reels.

Each position that it covers is always considered wild, so having a full reel of wilds is obviously an advantage. However, it also causes random wilds to land across the rest of the game board and for a re-spin to happen where all wild symbols stay in place.

This gives you a chance to land even more wilds, which adds a different dynamic of the game. This is because getting a new reel full of wilds will turn it into a solid Excalibur, giving you another re-spin with more chances for extra wilds and opportunities to get paid.

It goes without saying that the best overall wins available in the game come from this bonus feature, and a big part of it is in how good the wild combination payouts are combined with the fact that they pay from both left to right and right to left across all 10 paylines.

How to Win at Legendary Excalibur

With any game that centers around a low-volatility style of play, there’s going to be a certain amount of leeway that you can get in terms of increasing your bet size above what’s typical. The reason for this is that the swings are low, and the hit-rate is high, so it can play like a medium-volatility title if you increase your bet size by 50 to 100 percent.

By using the larger bet size, you then get rewarded proportionately better whenever you hit the Legendary Excalibur Re-spin Feature, and that’s where the best wins are in the game. This type of strategy can work if you keep an eye on your account balance and do not overshoot your bet size beyond what you’re comfortable with in terms of this game’s particular level of volatility.

As we outlined up above, the single best pays in the game are for the wild Excalibur symbol, but they’re the same as the King Arthur symbol in this title as well with 500x for five, 150x for four and 50x for three of a kind combinations.

From there, you’ll find three other mid-pay symbols that include 200x for five of the holy grail. You can also pick up 120x for five of the blue helmet, and five of a kind combinations of the rose on a green background gets you 80x.

There are a ton of stories, characters and motifs that go into the legends of King Arthur, and that means that there have been a lot of online slots about these concepts. With Red Tiger Gaming’s Legendary Excalibur video slot, we get a treatment of the material that focuses on the sword and resulting gameplay that makes a lot of sense instead of just having the feeling of having been thrown together.

This level of cohesiveness is what really makes this game and shows how much it stands out in the sub-genre. Red Tiger Gaming knows how to make their titles make sense from the bottom up, and that’s exactly what they achieved with this slot. If you like games with a high hit-rate and a lot of action, then this is a title that will very much appeal to you.