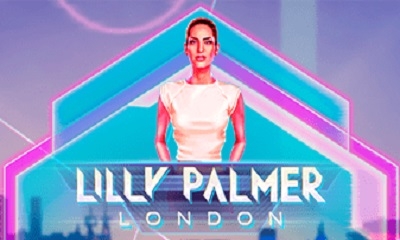 The Lilly Palmer: London online slot from GameArt is based on the musical artist of the same name. Based out of the underground scene in Zurich, she developed a massive following over time. In this game, you experience her music and the feeling of her shows with multipliers, free spins and more.

An Introduction to the Lilly Palmer: London Slot

We’ve seen a number of slots based on bands like KISS before, but it’s rare to see these games based around a single artist. In the case of the Lilly Palmer: London video slot, however, she brings such a great experience to her shows that it makes complete sense. GameArt slots like this one do a good job of capturing experiences like this, so it was a natural fit.

The neon lights and soundtrack really bring out the right feel for this artist.

A good presentation is key to any online slot. However, in a game based around a musical act, it’s even more critical. In this case, GameArt did an awesome job of making sure that players had everything they needed for an awesome time. The reels are shown with excellent neon symbols that really hype up the experience. Additionally, it’s all centered largely around the idea of what you would see if you were at one of her shows.

When it comes to gameplay, this provider knows how to make it fit the theme of the titles they put out. Action and excitement are the name of the game for this particular slot. However, we think that’s the right choice because Palmer’s shows are known for being particularly high-energy. With a variety of value-packed features and a regular game mode with a strong hit-rate, it’s a good mix overall.

The layout for this game is really straightforward, and it’s not difficult at all to learn to play with. However, it offers a really solid foundation for all of the features used in the slot. Here’s an overview of what you can expect when you sit down to play:

When we talk about wins in the following, we’ll talk about them in terms of coins. Subsequently, you can divide these amounts by 25 to get the wins as a multiple of your total bet size. This is a pretty straightforward way to handle all of this with a minimal amount of complication.

Additionally, this game has a slightly above-average volatility. With a Lilly Palmer concert, you need a lot of energy, and we think it was the right choice to get that feeling across. However, the swings aren’t generally that huge on average. That means it’s not something that can feel that overwhelming for most players either.

Gameplay and Features for the Lilly Palmer: London Video Slot

We really like the presentation that GameArt brought to the table with the Lilly Palmer: London online slot. However, it’s the gameplay that kept our attention after we got that strong initial impression. In the following, we’ll show you what you need to know about all of the features packed into this game. Additionally, this will give you all of the information you need to get started off on the right foot.

One of the first features that you’ll probably run into in this game is the cascade feature. Even though this is a music-based slot that doesn’t have as many ways to win as something like Rock the Reels Megaways, it still offers up plenty of ways to get paid thanks to features like this one.

Overall, the idea is pretty simple. When you get a winning combination of any kind, those symbols award their payout normally. However, after they do this, you’ll see them disappear to give way to new symbols that fall down into place. Once the 15-spot grid has been filled back up, players get another chance to win.

Several of the other features in this game are predicated on this cascading symbols mechanic. As such, we’ll break down each of them in the following to make it clear how they work.

In the top-right corner, you’ll see the current multiplier for the given cascade. This gives players an opportunity to get bigger wins on subsequent cascades. However, you’ll see that it goes up by one position after each cascade. The maximum multiplier is 50x, but you don’t need 50 cascades to get it there.

If you run up a few cascades in a row, then you can end up with some super serious multipliers on those subsequent wins. However, this multiplier resets between spins in the normal game mode.

Lilly Palmer herself is whom this entire game is based around, so it makes sense that she would be the wild symbol. She shows up on every one of the reels, and she offers the following wins:

Lilly appears stacked on the fifth reel each time she appears. However, this also ties into a special re-spin mode. The stacked wild doesn’t disappear because of the cascades. Instead, when it shows up filling up the entire reel, it triggers a re-spin mode where it walks one position to the left over and over until it reaches the far right.

On each stop, it pauses to give you any wins that it could help you get. However, the cascades stop during this re-spin feature.

The golden scatter shows up on all five reels. They are collected and removed from the reels during the cascades to fill a meter in the top-left corner of the game board. Once that’s full, players receive a set of 15 free spins. Additionally, you’re awarded five times your total bet size.

During the free spins mode, the cascade multiplier does not reset between spins. However, you can also add five more free turns to your total by collecting five scatters. GameArt slots like this one have no limit to the number of free spins you can get in a row as a result of re-triggering.

How to Win at Lilly Palmer: London

The regular game mode of this title is mostly smooth sailing in terms of how you should approach it. Since the volatility is somewhere around what we would call medium-high, you may want to drop your bet size down slightly to compensate. However, many players may not find this to be a necessary adjustment.

Another way to play this game is to buy the free spins feature. However, you have three options to do so based on your starting multiplier. In any case, the volatility of this option is higher than what we see in the regular mode. Subsequently, we have to recommend that you drop down your bet size quite a bit to compensate for the much larger swings that come with it.

The top-paying regular symbol is the red set of neon headphones. It pays out 250x for five of a kind combinations. From there, the blue set of speaker boxes will earn players 100x instead. Additionally, pays of 50x and 40x are yours when you line up five of the purple disco ball or the green drink. Rounding out the high-end wins are the green sunglasses, which pays 30x for a five of a kind combination.

For the card rank symbols, GameArt set this up to really offer players a pay table that’s easy to remember. This includes the red A symbol, the blue K, purple Q, teal J and green 10 symbols. Each of them will pay out a simple 10x for five of a kind on a line.

The musical theme is handled in a really intelligent way in the Lilly Palmer: London slot, compared to it just being a small part of the experience like what players see in certain similar titles. Additionally, the gameplay for this title gives a tremendous amount of action. The level of graphics of this title is exceptional and raises up the entire play style as well.

As a part of GameArt’s selection of games overall, this is a video slot that fills a key job since it has appeal to many people with a bright and vibrant theme. Also worth noting, what slot fans will really enjoy about this slot is the additional padding that the selection of features add to your bottom line, especially the cascade multipliers.

What is the Return to Player (RTP) for Lilly Palmer: London?