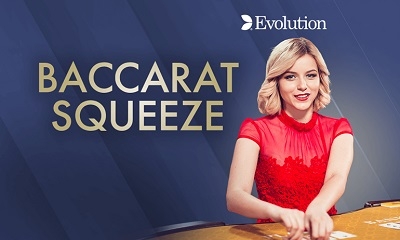 Evolution Gaming’s Baccarat Squeeze live dealer games give players an exciting squeeze-based appearance. The dealers will show the key cards slowly with a skillful squeezing performance. This increases the drama and makes the game a much more social event.

An Introduction to Live Baccarat Squeeze

In the world of Baccarat, the squeeze is an important part of the ceremony of the cards being dealt. However, it’s often skipped over for the sake of moving the game along. With that said, getting in as many hands per hour as reasonably possible isn’t always the priority for all players.

What a squeeze does is create more drama and an increase in quality of play. This game takes this approach as a focus on quality over quantity, which is the point of the procedure.

While the normal Baccarat rules apply, the fact of the matter is that the experience is quite different. As such, this is a game that’s a bit focused on what we could consider to be advanced players. You don’t need any specialized knowledge, however. Instead, you only have to enjoy the excitement of having key cards revealed one bit at a time.

If you really enjoy the social aspect of games like Baccarat and don’t care as much for game speed, this is a title for you.

The Importance of the Squeeze

Some players may not understand the importance of the squeeze. This comes down to the social interactions that Baccarat is known for in the live environment. The live Baccarat Squeeze tables from Evolution Gaming try to recreate this dynamic as much as possible online.

There are a few key things to focus on here if you want to understand why this can be so much fun:

Once you understand how this works, you can understand why it’s such a skillful thing for a dealer to do. Instead of flipping the key cards all over at once, they’re revealed more slowly with one side at a time. This gives you some information about the card, but not all of it comes at the same time.

Also understand that when we talk about key cards, we don’t mean all cards are subject to a squeeze. Only certain cards will be, like if three cards are revealed normally, but the fourth will determine the winner of the hand.

The basic idea here is that the dealer will put out two hands of two cards each. One is called the player hand, and the other is called the banker hand. You’re able to wager on either despite the names, so don’t let that throw you off.

The Rules of Baccarat Squeeze

To start things off, players need to know how each hand can win. The goal is for the hand to get as close to a score of nine points. However, the total sum of the cards in the hand isn’t exactly what determines the score. Instead, it’s the “ones” digit in the total. For example, a total of 7, 17 or 27 are all equal in this game since they are all worth seven points.

Because of this, the face cards and “10s” are worth either zero or ten points each. It doesn’t matter which like it does in blackjack because you end up with the same result. Instead, you should just choose the one that’s easier for you to keep up with.

The last rule that players need to know before we get into the gameplay is about how betting works overall. While live Baccarat Squeeze can look like blackjack, it doesn’t work the same with your decisions. Once your bets are in, you don’t get any strategic decisions. The dealing of the cards and the decision of whether a third card is dealt to either hand is based on the cards already dealt and not any decision by the players. In fact, several players can be wagering on the same hand (player or banker) at the same time.

To illustrate the gameplay procedure, we’ll walk you through how a game round could be played. We’ll start with the betting and walk through to the end of the hand.

It’s really a straightforward game procedure that doesn’t take very long. However, adding the squeeze definitely slows gameplay down in terms of hands per hour. That’s the appeal for many players since you get a better quality of experience in terms of excitement. In light of that, getting in more hands per session isn’t as important.

Some Baccarat games make themselves different by offering a bunch of different side bets. At the live Baccarat Squeeze tables, you’re not going to find that. Instead, you’ll find a standard set of regular bets and one key side bet. Here are the bets you can make:

Those four bets make up what’s available in this game. Instead of a focus on a wide range of different betting types, the squeeze is the star of the show.

How to Win at Live Baccarat Squeeze

The only real strategic thing you have available in this game is to avoid the pair bets. With a house edge rate in the double digit range, there’s not really much of a reason to choose it. We also recommend not using the tie bet every single time, but it’s not bad to use it sometimes. Sticking to the banker and players bets will get you the best payouts in the long run, however.

With the live dealer Baccarat Squeeze tables from Evolution Gaming, you’re getting an experience that’s focused on a fun, quality aspect of a classic title. That’s going to be a great experience for a lot of players. However, keep in mind that the game will go a little bit more slowly than usual. If that’s a critical factor for you, then picking one of their other styles of live dealer Baccarat may be a better fit.