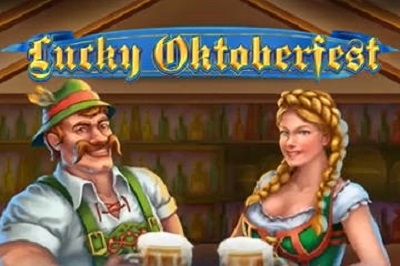 Red Tiger Gaming’s Lucky Oktoberfest online slot brings all of the fun and excitement of this popular event to the reels for you. This game has a free spins mode with multiple extra features along with a special feature where beer floods the reels to give you lots of guaranteed wins with randomized symbols.

An Introduction to Lucky Oktoberfest

The Lucky Oktoberfest video slot is a good example of a game that’s based around a live event that happens every year, and we don’t get many examples along those lines. Red Tiger Gaming has done an excellent job of putting this title together and sticking to the theme without turning it into some kind of parody.

In this slot, they ride the line between making the theme fun and making the theme a bit of a joke, and that’s good because it’s a theme that should be taken seriously without being taken too seriously since the event is all about having fun in the first place.

In any case, it’s got a great look with solid graphics, and the gameplay is pretty interesting as well. They got away from some of the trappings of “standard” video slots here to give a different type of experience that focuses a lot on getting value from the regular pay table, and that’s something that you don’t see a whole lot of from the gameplay perspective.

A really solid, popular style of layout is used for this game. It gives you a good number of ways to win without it being so many that it’s overwhelming and difficult to keep up with. Here’s what you’ll be getting:

The volatility of the Lucky Oktoberfest online slot is actually pretty low. The pay table is designed to give out a significant amount of the value of this game with a fairly high hit-rate compared to how relatively few paylines there are. While the features do give a good value as well, it’s not as overwhelming as many other slots in the sense of it just dominating your chances of coming out on top for your sessions.

The feature set for this game is set up in a way that it all ties back into the Oktoberfest theme, and that’s something we’re sure that players will love. In what follows, we’re going to break down everything you’ll need to know about how these features and the overall gameplay of the title work.

There are bier mugs that can appear on the first and fifth reels only. They are the keys to the Bier Reels feature, which is one of the more interesting theme-based features we’ve ever seen.

When you get the mugs on the first and last reels at the same time, you will see them collide in the middle to activate the feature.

The way this feature works is that random reels become filled with beer all the way up to the top of the reels. These cover up random spots on the game board which are then all replaced with the same random symbol.

With this feature, you are guaranteed for the beer to turn into symbols that will give you payouts that you wouldn’t have gotten otherwise, so it’s a value-oriented feature that makes sure that you get some wins.

This game has a free spins mode, but it’s activated in only one way to always give the same number of free spins.

When you get all three of the free spins symbols on the reels, you will be rewarded with 10 free turns.

These free spins scatter symbols only appear on the first, third and fifth reels, so you can’t get four or five of a kind.

During the free spins bonus round, there are some extra features that you can get based on the two characters on the title screen.

With Hans, he shows up on the first reel only. If he lands along with a bier mug or a Helga symbol, he’ll start drinking and increase the multiplier for all of your wins for the remainder of the feature.

There’s also a Helga symbol, and she shows up on the last reel only. If you get her with Hans or a bier mug, you’ll pick up extra free spins that will be added to the total. Getting both of them at the same time is obviously ideal and will add a tremendous amount of value to the remainder of the feature.

How to Win at Lucky Oktoberfest

We mentioned further up above that there is a particularly low volatility in this game. The pay table, which we’ll get into below, is very balanced with lots of mid-level wins as well. Putting these together, we suggest that players consider increasing their bet sizes a bit on average.

This will increase your payouts whenever you hit wins and the bonus features, but your swings will stay pretty reasonable because the volatility is so low. It’s a strategy that some people don’t like, but it’s particularly viable because of the fact that the volatility is pretty low in this slot.

Players have two tiers of symbols in this game when it comes to payouts. The blue and white shield with the gold trim pays 300x for five of a kind. It’s worth noting that you can win for just two of this symbol, and it’s the only symbol in this slot where this is the case.

From there, you have the four card suit symbols that are designed to look like different types of beer have been poured into their shapes in different colors. The spade pays 20x for five, and the heart gets you 16x. For the diamond and club, you can earn 12x and 10x, respectively, for five of a kind combinations on a payline.

There are a lot of different software providers who have made games based on Oktoberfest themes, but the Lucky Oktoberfest online slot by Red Tiger Gaming is definitely one of the best of the sub-genre. There was a lot of creativity shown when it comes to how the theme and features come together, and there was a lot of skill put into making this a great-looking game.

Between the gameplay, features and aesthetics, this is a pretty solid video slot. Our main complaint would be the lack of a wild symbol, but with the way the features work and how high the hit-rate is without it, we’re not sure that it actually needs it in the grand scheme of things. Regardless, this is a balanced title with a low volatility that we think appeals to a pretty wide audience even if you don’t like to drink.