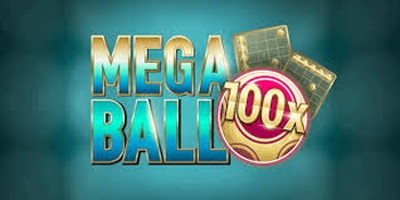 Mega Ball is a lottery-style game produced by Evolution Gaming. This title uses a game show format that’s popular with a number of their other games and offers a payout structure that can give you up to 1 million times your bet size along with plenty of ways to get smaller and medium wins.

An Introduction to Mega Ball

There are a whole lot of different lottery and lottery-style games in the gambling industry as a whole, and this includes everything from traditional paper-based lotteries to online games like Keno. Evolution Gaming, generally seen as the top of the live dealer world online, has their own game in this genre.

This game is Mega Ball, and it offers players an exciting combination of gameplay ideas that isn’t quite like anything else you can find online or in land-based casinos.

The whole idea here is that you have a lottery style of play without it being exactly like any particular lottery-style game that otherwise exists on the market. The action is pretty serious, and they put together the game to look amazing with a game show type of feel. However, it’s the fact that both the play style and the visual appeal come together in such a cohesive way that really creates the perfect overall experience.

Something we want to quickly point out before we get into the meat and potatoes of the Mega Ball live dealer game is that it’s a bit of a combination of three existing genres. On the one hand, it has elements of 75-ball bingo with the way that wins are formed. On the other hand, it has elements of keno with the pick-based nature of how the winning numbers are chosen. Finally, the multipliers that come from the Mega Ball are something that is very clearly drawn from the most popular land-based lotteries.

Combining these three ideas into one package has led Evolution Gaming to have one of the most interesting and in-depth lottery-style games available anywhere online.

The gameplay procedure and rule set for the live Mega Ball games can be broken down into a few phases. We’re going to look at each phase individually as we break things down so that it’s easy to tell what’s going on at each stage of the game. It flows together really well when you’re actually in the game playing, but understanding what’s going on ahead of time is a bit of a different story.

You start off by making two decisions that affect your betting. The first is that you decide on a bet size per card. This amount can range from €0.10 to €100 each, so you have plenty of room to come up with some pretty tremendous bet sizes.

You also have four different options when it comes to the number of cards that you can play with. Your options are to play with 1, 10, 15 or 25 cards for each game. The cost is multiplied by how much you’re playing on each card as well, so if you played with 25 cards at €1 each, then your total cost would be €25 for the game round.

Once you have purchased your cards, balls start to fall and be chosen. They are shown being pulled from the hopper automatically, and each ball is shown off to the side to clearly point out which ball is being drawn at each moment.

You’ll also see the list of balls drawn in total in the bottom-right corner of the screen with a history sort of section.

As the balls are drawn, you’ll see them be marked off on your cards. The whole idea here is that you’ll have opportunities to make lines to win based on the numbers that are drawn. The available numbers for each vertical line as as follows:

You’ll notice that the balls are 1-51 instead of 1-50, which could be a misconception some players end up with based on how the rest of the numbers are structured.

While these balls are dropping, you’ll notice that the cards rotate around a bit in the display at the bottom of the screen. The priority goes to the cards that are the most likely to give you wins since they’re the ones that you’ll want to pay the most attention to, and they’ll move in and out of the most prominent spots to be more visually available.

After the first 20 balls drop and are added to your cards, you’re taken to the multiplier wheel. If you ever watched the game show The Price is Right, then the wheel will look very familiar as it looks like it was designed to look almost exactly like the one from that particular game show.

The multiplier wheel is spun, and this determines the multiplier for the Mega Ball, which is drawn afterward.

The Mega Ball, which is where the name of the game comes from, is the name given to the 21st ball to be drawn, which comes after the multiplier wheel has been spun to determine its multiplier. Any winning cards that have a line formed that includes the Mega Ball are multiplied by the amount shown on the multiplier wheel, so you end up with some serious chances to boost your payout by non-trivial amounts.

It’s also worth noting that you have a random chance to draw a second Mega Ball. When this happens, it’ll have the same multiplier attached to it as the first, but if you get wins on the same card with both Mega Balls, then the multiplier is only applied to that card’s payouts once.

How Payouts Are Determined

The payouts that you receive in Mega Ball are based on the number of lines (horizontal, vertical or diagonal) that you complete on a given card. There are 12 possible lines that can win on each card. The wins are as follows:

Note that the payouts listed here for the Mega Ball live game show are all after you have paid the cost of the card. That means that one line for a 1x win doesn’t mean that you profit 1x. Instead, you’ll break even on that card.

Once payouts (if any) are awarded, another round starts where you get the option to buy fresh cards and start the process all over again.

How to Win at Mega Ball

There are no strategic decisions to be had in Mega Ball, but there are some things that you should know in terms of bet sizing and how you choose your cards that can affect your gameplay experience in a serious way.

The main thing that you want to manage with your betting decisions is variance. For example, with a €0.10 bet size with 10 cards or a €1 bet size with just one card, you’re going to be playing for €1 total either way. Your house edge will also be the same either way. However, the variance of the first option will be significantly lower than that of the second option.

For players who care about good bankroll management, that means that you’ll actually need to play with a smaller total overall wager size if you go with fewer cards because the variance is so significantly higher. In general, we recommend that players use at least 10 cards on each play to try to keep the variance from being too serious.

However, if you’re the type of player who wants to “go big or go home,” then a single card with a larger wager may be your preferred way to go.

We love what Evolution Gaming has done with their Mega Ball live dealer games because of the game show approach and how much fun and action it brings to the table. The combination of the game show elements with additional elements from 90-ball bingo, keno, lottery-style games and other titles creates a unique experience, and there’s not really anything quite like it in the industry otherwise.

Which online casinos have Mega Ball?