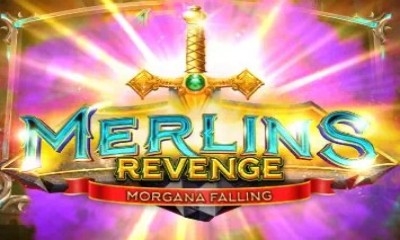 While the story of King Arthur is more popular, the full story of Merlin is perhaps more interesting. The essence of this character is really expressed in the Merlin’s Revenge Megaways online slot. Players can have thousands of winning ways on each spin on top of a feature-rich experience.

An Introduction to the Merlin’s Revenge Megaways Slot

iSoftBet slots are generally known for covering a ton of different themes and concepts. However, a lot of the time, they go a bit off of the beaten path. This includes games that focus on what would otherwise be seen as secondary characters in popular stories.

The Merlin’s Revenge Megaways video slot is an excellent example of this approach in motion.

The concept is handled incredibly well. You start off in an enchanted forest, which is the kind of place Merlin would have began his story. Additionally, many ancient symbols and magical gems related to his work are shown on the board. This is all in front of the stone backdrop of the reels, which further takes you into an immersive experience. In this way, it may remind some players of Morgana Megaways. In any case, we love how iSoftBet handled the presentation of this game. It has top-tier aesthetic appeal.

As if having excellent visuals wasn’t enough, the gameplay may be even better. From the name, you can tell that this is a Megaways slot. This particular flavor of that approach has thousands of ways to win on most spins. Additionally, players are given opportunities to get extra wins on the same spin and some really value-packed bonus features. The wide array of different styles of free spins here stands out a lot as well.

The specific type of Megaways format used here is actually the one we prefer out of all of them. We say that because it’s the most straightforward and easy to understand. If you have played them before, you’ll know what we mean. However, if you haven’t, here’s what you can expect going forward:

With so many ways to win, the volatility is kept pretty much in check from the hit-rate alone. It comes in at the medium range as a whole. However, it could have been lower, but the free spins feature in particular really packs a huge amount of value. In light of that, this one game mechanic drives the volatility upward quite a bit.

Each win that you have in this game is a multiple of the overall amount wagered. As you can imagine from how much the size of the game changes, basing that on lines wouldn’t make much sense. However, you can see “coin sizes” represented in the betting options. This is based on the idea that you’re wagering 20 coins per turn. With that said, it doesn’t actually change anything and is only there for the sake of convention.

Gameplay and Features for the Merlin’s Revenge Megaways Video Slot

To say that this title has a lot of features and game mechanics would be a serious understatement. In fact, the Merlin’s Revenge Megaways online slot has more going on in this way than most. It’s on the same level of complication as the similarly themed Towering Pays Excalibur game.

In any event, we will break down everything you need to know in the following. However, we strongly recommend having a look over how it all works. This will make it much easier to jump in and get started without feeling lost.

We’ll start off with the wild symbols because they’re a lot of fun in this title. With the Megaways format, the wilds can get you a lot of extra wins that wouldn’t have been possible otherwise. They’re more of a big deal than usual because of the flexibility of how wins are awarded.

These wilds are a big glowing W with blue and light green shades. Additionally, they appear on the middle four reels only. However, don’t let this fool you. The fact that they only show up on the second, third, fourth and fifth reels doesn’t stop them from providing a tremendous amount of value.

Note that these wilds do not substitute for the bonus scatters or for the mystery symbols. However, they do substitute for everything else in this game.

The cascade feature is pretty standard for these types of games. It essentially offers an increased hit-rate with more chances to get paid on individual spins. Additionally, this helps the volatility quite a bit.

In short, your wins are calculated and awarded to you on the reels on any spin. From there, those winning symbols are removed from the reels with a glowing bit of magic. However, these empty positions then become filled with new symbols falling in from above.

After the board is filled back up, players are given new opportunities to win. This process can continue over and over as long as you keep getting extra wins.

Sometimes you’ll see glowing green orbs that are on a red background. These are the mystery symbols. However, note that they can also often appear stacked. Additionally, you can find these in the regular game mode and in the free spins of the Merlin’s Revenge Megaways video slot.

Once the reels stop spinning, any mystery symbols are all turned into a single matching symbol. This puts many more matching symbols on the board, which increases your chances for wins. That’s the whole idea to the feature, but it also increases the chances of getting pays that trigger cascades. As such, these features sort of compound each other’s value.

The red bonus symbol showing the hilt of the sword Excalibur can show up on each reel. However, you won’t ever seen more than one of them on the same reel. In light of this, up to six of them can be found on the board at once no matter the size of the reels due to the Megaways fluctuations. With that said, you only need three to trigger the free spins mode:

In this feature, a special collection game mechanic is active. You can collect different symbols to receive different rewards. A complete description of what they do per symbol can be found in the full pay table. However, they generally award additional free spins and/or a minimum level of winning ways per spin.

Subsequently, free spins are worth a lot more than regular spins. Additionally, we want to give iSoftBet props for putting together a cool mechanic that we’d never seen before in a free spins mode like this.

How to Win at Merlin’s Revenge Megaways

As we mentioned further up above, the volatility of this title is in the medium range. Subsequently, that means players don’t need to worry so much about any kind of betting adjustments. The swings are pretty moderate on average as it is. Instead, we recommend just picking out a size that you’re comfortable with and adjusting from there as you get into the game.

Players also have the option to simply purchase the free spins. Doing so will cost 80 times your total starting wager. However, it will force at least three scatters to appear on the following spin.

As you might expect, Merlin is the top-paying symbol. He gets you 10x for six of a kind. Moreover, he’s the only symbol to pay for only two of a kind; everything else requires three. From there, the purple portal pays 4x for six in a row. Six of a kind of the green or blue gems pay 2x or 1.5x, respectively.

iSoftBet did an excellent job with both the graphical style and the gameplay in the Merlin’s Revenge Megaways slot. Players who enjoy this type of theme and presentation may also enjoy the 15 Crystal Roses slot. Overall, it’s a good mix of immersive aesthetics with action-oriented game mechanics. What’s more is that it doesn’t have a crazy volatility level, so the swings don’t generally get out of hand.

What is the Return to Player (RTP) for Merlin's Revenge Megaways?