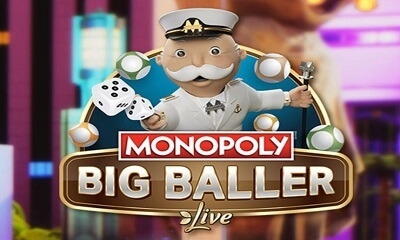 With Monopoly Big Baller Live, the premier live casino supplier Evolution Gaming has delivered yet another masterpiece. This title combines elements of the ever-popular Monopoly Live with keno-style games, to create a unique and highly entertaining release. To learn all about the Monopoly Big Baller Live rules and other key features, read on!

The Monopoly Big Baller Live concept is quite simple. A lottery drawing machine randomly selects 20 numbers, just like if you were playing keno. Your playing cards also contain randomly generated numbers and the aim is to match as many as possible.

For every line you successfully complete, there’s a prize of 3x your bet. But there are two important twists. First of all, Mr Monopoly will apply random multipliers and free spaces to your card. Some will apply to entire rows, while others are good for individual numbers. These bonuses make it easier to complete winning lines and can greatly enhance your rewards too.

Secondly, in addition to your own playing cards, there are two bonus game cards in play. Hopefully, the machine will randomly select the numbers which complete one or both of these cards. Because if that happens, you’ll be whisked off to play the bonus game. Fans of the classic live dealer title Monopoly Live will recognise the Big Baller bonus game, as it’s exactly the same!

If you’re a fan of Monopoly and enjoy keno, bingo or lottery games, Monopoly Big Baller Live is right up your street. Get lucky and you can up to 500,000!

The Monopoly Big Baller Live rules are quite similar to a couple of other Evolution Gaming titles. The bonus game, which we’ll talk about later in this guide, is just like that of Monopoly Live. While the main gameplay elements are similar to Mega Ball.

There are 60 numbered balls inside a drawing machine at the start of each game round. 20 of them are drawn each turn and you must match the chosen numbers to those on your playing cards. If you successfully match five numbers in a line, you’ll receive a prize, the details of which we’ll reveal shortly.

These playing cards resemble a classic bingo card, with a 5×5 grid of 25 randomly selected numbers. However, the central spot is always free, hence the name. You will not need to match a number on the free space, making it much easier to complete winning lines.

You’ll recognise these two cards as they are coloured green and contain the Monopoly house on the free space.

The two Chance playing cards are gold in colour and also contain a 5×5 layout of numbers. However, unlike the Free Space cards, these do not give you a freebie by default. You must actually match the middle number in order to complete those winning diagonal lines.

Requiring the middle number naturally makes it much less likely that you’ll win on these cards. As compensation, the middle number on a Chance card is guaranteed to have a randomly chosen multiplier, every single game round.

There is also a pair of bonus game cards containing randomly generated numbers, that are shared by all players. The silver “3 Rolls” card features three numbers, while the gold “5 Rolles” bonus game card contains four numbers.

At the end of the bonus round, the final multiplier value combined with your bet size will determine the payout. We’ll go into detail about the Monopoly Big Baller Live bonus later on.

In order to win a prize when playing Monopoly Big Baller Live, you need to match a complete line of numbers. This can be vertically, horizontally or diagonally. For each row you successfully match, you’ll receive a 3x multiplier.

Your chosen bet size is increased by the final multiplier value to determine your prize. For instance, a bet of 10 coins returns 30 if you complete a single line. But if you managed to match three complete lines, you’d receive 9x, meaning a total return of 90 coins.

Once the betting period is complete and wagers have been accepted, Mr Monopoly throws the lever to start the round. At this point, he’ll randomly add a bunch of bonuses to your playing cards.

First up, each card can receive multiple free spaces, making wins much more likely. This includes the bonus game cards if you’re lucky! However, the Chance and Free Space cards are also eligible for multipliers, which can greatly enhance your winning payouts.

There are three kinds of multiplier in Monopoly Big Baller Live, which are as follows:

Remember, none of these multipliers can appear on the bonus game cards.

What live dealer casino game would be complete without an intriguing bonus game? In Monopoly Big Baller Live, the bonus feature is one of the most fun around.

If the machine matches three numbers on the silver card or four on the gold, Mr Monopoly heads over to a special game board. Whenever it’s triggered by the silver card, he’ll roll the dice three times. If it’s the gold bonus game, he’ll take five turns. It’s also possible to match all seven numbers and play two consecutive bonus games!

At the end of the bonus game, a multiplier value will be applied to your eligible bet, which determines your payout.

The Big Baller bonus is laid out exactly like the famous Monopoly board game. It even includes Chance and Community Chest cards, rail stations and jail. Two dice appear on the screen which are rolled to determine Mr Monopoly’s destination on the board.

Whenever he lands on a property space, the corresponding multiplier value is added to the overall total. If that plot also contains houses or hotels, the multiplier is further increased.

If Mr Monopoly lands on a Chance or Community Chest card, you will earn additional prizes. However, it’s also possible to receive deductions. It all depends on the card chosen!

When Mr Monopoly is sent to jail, we need to roll a double in order to get him out. If he is unable to be set free, he cannot move around the board to increase the multiplier value and the rolls are wasted.

But the good news is, that you won’t lose any multipliers already earned whenever he is sent to jail. And if he remains behind bars after two unsuccessful attempts to hit a double, he will automatically be released.

Ideally, Mr Monopoly will avoid the Income Tax and Super Tax spaces, as these will decrease the multiplier earned. But if a double is rolled, he’ll get an extra turn, giving you a chance to further increase your potential payout.

Free Parking, the rail stations and the two utilities also offer basic prizes in addition to the property spaces.

It’s possible to configure an auto bet on each of the Monopoly Big Baller Live playing cards, including bonus game cards. This allows you to wager automatically, so you are free to relax, focus on the action and enjoy the chat. Select anywhere from five through to 100 autoplay rounds and configure loss limits to protect yourself.

Furthermore, you are not restricted to the default selection of two Free Space cards and two Chance cards. There is a switch next to the space where you place your betting chips to toggle the playing card from one to the other. This enables you to play up to four of each card, or mix and match, either with a one and three split or two of each card.

Okay, that’s everything you need to know about the Monopoly Big Baller Live rules and payouts. So let’s now quickly run through a game round, to ensure you fully understand how it all works.

All of the fully licensed casinos named on this page offer this engaging Evolution Gaming product. You’ll need to create an account in order to play, as the game has no demonstration mode. But don’t worry, as our expert team has vetted each site.

You’ll find them to be safe and secure, with trustworthy payment methods and excellent customer service as standard. If you get bored of playing Monopoly Big Baller Live, you can choose from sizable libraries containing hundreds of different games.

How to Win at Monopoly Big Baller Live

As with the vast majority of live dealer casino games, Monopoly Big Baller Live is a certifiably random game. The balls are produced from a lottery-style drawing machine, while the numbers on the cards are also picked randomly.

Further, whenever the bonus game takes place, this is out of your hands too. Mr Monopoly will take a walk around the board based on the outcome of dice rolls. With no way to influence the gameplay, we simply have to place our bets and hope for the best.

With that in mind, it’s advisable to place small bets when playing Monopoly Big Baller Live. Put aside a sum of money that you are happy to risk losing and break it into small chunks, or units. Place bets of a consistent unit size and make sure that your bankroll lasts as long as possible.

Make sure that you bet on both bonus games each game round, otherwise you’ll miss out on the biggest potential payouts. And the lowest risk strategy is to play the Free Space cards, as it’s easier to secure a win. Remember that casino games are supposed to be fun, so please gamble responsibly.

Monopoly Big Baller Live is a fabulous addition to the already impressive Evolution Gaming back catalogue. Building on the popularity of other enduring Monopoly titles, it looks set to become a hit with fans of lottery, keno and bingo games. While live casino connoisseurs are bound to enjoy the charismatic game show hosts, set design and fast-paced action.

The creative geniuses at Evolution Gaming are behind Monopoly Big Baller Live. There’s a good reason why this live casino game supplier wins awards almost every year. As you’ll see for yourself when you try this game

What is the Monopoly Big Baller Live RTP?

The Return To Player rate (RTP) of Monopoly Big Baller Live is 96.10% when playing what Evolution Gaming terms “optimal strategy”. The developer has not revealed exactly what this strategy is, however.

How do you play Monopoly Big Baller Live?

It’s easy! Place your bets and try to match the numbers on your card with the 20 drawn from the machine. You can see the complete Monopoly Big Baller Live rules a little further up the page.

Is there a winning strategy for Monopoly Big Baller Live?

Unfortunately, there is no guaranteed winning strategy for Monopoly Big Baller Live. The numbers are all randomly selected, meaning there is no way to gain any kind of edge. Just place your bets, cross your fingers and hope that today’s your lucky day!