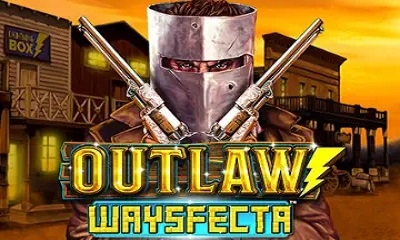 The Outlaw Waysfecta online slot is all about giving players lots of ways to get paid serious wins in a Wild West setting. Multiple bonus rounds form the backdrop of the Wayfecta variation of a 243-ways to win title. As a result, the gameplay is fast-paced and the pay schedule is very balanced.

An Introduction to Outlaw Waysfecta

Most people who have been involved in the online slots world can tell you that there is no shortage of Wild West-themed titles. It seems like every major software provider out there has at least one. To stand out in that sub-genre, it usually takes a lot as a result. However, Lightning Box Games was able to do it in a real way with their Outlaw Waysfecta video slot.

The Wild West concept is tied into the gameplay in a lot of ways that really create a cohesive experience.

Visually, this title is spot-on with the theme. It’s got that brown, dingy feel to it like you’d get out of popular movies in the genre. On top of that, a variety of different characters are shown on the screen. Additionally, you can really see how much depth that have as characters because of the serious amount of detail that’s been crafted into the look and feel of each of them. When the characters on the reels pull you in like this, you know the aesthetic appeal is on point.

From the first few spins you play in this title, you’ll know the gameplay elements are strong. That’s because everything is set up to show off the format changes from the usual with the Waysfecta concept. However, the bonus rounds bring a lot to the table as well, and we’ll get into that down below.

The Waysfecta layout style isn’t difficult to get used to. However, it’s definitely not standard, and you may need to see a few spins to have it down on an intuitive level. In any case, we’ll break down what you need to know here to get a head-start.

The volatility for this slot falls around the medium range. A lot of this has to do with the grand jackpot that increases the volatility a bit. However, the hit-rate is actually a bit above average and is helped by the Waysfecta game mechanic.

All payouts in this game can be described based on multiples of your total wager. However, the four jackpots on the top-left corner will be listed in cash amounts. Subsequently, they will change when you adjust your bet size, but the values on the regular pay table will not.

We really like how the feature set of the Outlaw Waysfecta online slot fit into the theme particularly well. In the following, we’ll show you how each of these features work. While they aren’t particularly complicated, it’s nice to go into playing knowing how each of them function individually since there are a few of them to keep up with.

The outlaw symbol has a red background and shows him wearing a metal mask. He’s also holding two pistols crossed in front of him. This is the wild symbol, and it gives you wins you would have missed out on without its help.

However, you aren’t able to get wins that only consist of wild symbols in this title. That’s because they do not appear at all on the first reel. Instead, you can only pick up wild symbols on the second, third, fourth and fifth reels.

Within the “all ways” format, especially with the extra winning ways that come from the Waysfecta mechanic, these wilds can really compound your wins. That helps to make them worth more than what you might see in more traditional payline-based games.

The best-paying regular symbols in this game are the trains. They show up in gold, and they double as a bonus symbol. However, what we’re concerned with first is the payouts they offer. These payouts are as follows:

Additionally, you get these wins no matter where they appear on the game board. However, these trains are not subject to the Waysfecta mechanic. As a result, they cannot split into four parts on the middle three reels.

Also, the wilds do not substitute for the bonus symbols, and these trains do not show up in the bonus feature.

When you get at least three of the scatters anywhere on the game board of the Outlaw Waysfecta video slot, you trigger the Shootout Bonus feature. This gives you one of three different options that are essentially chosen at random: Train Heist, Free Spins or an instant payout.

The instant payout can be worth up to 6,400 times your total bet size. Note also that you get to select random objects to shoot until one of these three features are chosen. However, it’s essentially random, and your choices do not affect things at all. Instead, it’s an effect that’s done more for fun and immersion than anything else.

The Train Heist shows a heist take part one step at a time based on different symbols. However, you don’t really have much input on how things go since it’s all randomized. More or less, you have extra spins that happen that move things along and give you chances to win based on how many golden carriages you take from the feature.

However, this feature can give you the four static jackpots:

These jackpot wins are based on a multiple of your total bet size. However, they’re the only prizes in the game based on this method.

You start out with eight free spins. This is no matter how many scatters you used to trigger the feature. Additionally, you begin with a multiplier of 1x. Each time you have a spin with any win, you get an additional extra spin. However, you also have your multiplier increased by a factor of one.

The number of free spins is unlimited based on this dynamic. However, the multiplier is capped at 40x. For the sake of clarity, this multiplier does not reset between rounds. Instead, it’s carried through the end of the free spins feature.

How to Win at Outlaw Waysfecta

With an average volatility, you don’t really need to make any kind of betting adjustment whether increasing or decreasing your wager. Instead, your best option is really to just pick a bet size near what you’re comfortable with on average. Going from there is the best thing you can do because this title is already so balanced with its hit-rate and volatility.

The cowboy in green is the sheriff, and he pays 75x for five of a kind. He’ll also give you a win for just two of a kind, and he’s the only symbol to do so. From there, you can pick up 30x for five of the police officer in blue. Additionally, a win of 20x is yours when you line up five of a kind combinations of the woman in pink.

You’ll also have two mid-level symbols. They are the pistol in a holster and the pair of horseshoes. Each of these have the same top payout of 10x for five of a kind.

From there, the wins drop off a bit for the card rank symbols. This includes a 5x win for five of the purple A or red K. Additionally, it includes 3x payouts when you get five of the yellow Q, blue J or orange 10 symbols.

The thing slot fans will absolutely enjoy about the Outlaw Waysfecta video slot is the value that the range of features add to your overall winnings. In addition to that, we really love how the visual appeal of the Wild West town gives people an overwhelmingly intense gameplay experience compared to only being an unimportant aspect of the video slot.

On top of that, since it offers a high degree of quality while still standing out as an individual game, this video slot fits tremendously in this software company’s offering of titles overall. Compared to other games that utilize related driving concepts, this title is different in a number of ways compared to just being like everything else, and the play style is overwhelmingly centered on action with a serious amount of ways to hit big payouts.

Which online casinos have Outlaw Waysfecta?

What is the Return to Player (RTP) for Outlaw Waysfecta?