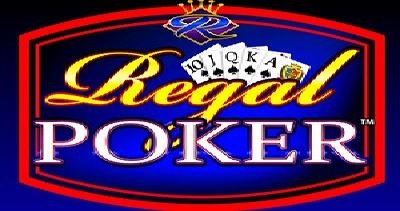 Regal Poker video poker is known for having an atypical pay table that offers some pretty solid top payouts at the upper end of the pay table. If you’re the type of player who enjoys nuanced strategy and pushing small advantages consistently over time, then this is definitely a title to check out.

An Introduction to Regal Poker

For better or worse, the video poker sector is full of games that have similar styles of play with different pay tables. While that may seem like versions of the same game over and over, that’s not actually the case because of how those seemingly small changes in the pay table can have massive implications for the strategies involved.

It’s these strategy shifts and competition against one’s self and the casino that helps to make Regal Poker a hit for video poker fans.

The pay table is somewhat of a split between Jacks or Better and Bonus Poker. This gives it two distinct advantages. The first is that it’s familiar enough to players that they don’t have to learn a completely new game overall while still having some key strategic differences, and the second is that the volatility isn’t quite as serious as what you find with bonus poker and its variations.

Here we’re going to break down everything that you need to know about this game and how to play whether you’re a recreational player or take strategy very seriously.

The procedure for playing this game is similar to other video poker games, and it follows the following series of events:

One thing is really important to note here. The player does not have to declare his or her hand in Regal Poker video poker, meaning that you don’t have to decide which type of poker hand you have. Instead, the game automatically evaluates your five cards and declares you to have the best possible hand from that combination of cards. This helps to avoid situations where you under-declare your hand and miss out on payouts, which can happen in other types of games.

The pay table for this game is a bit atypical because not all hands of a given type are paid the same. Moreover, hands are not all paid in accordance to their poker hand strength.

Here we’re going to break down the pay table for this game based on the top payouts in descending order instead of the five-card poker hand strength since we think it’s more clear that way:

It’s worth noting for a straight and a straight flush that an ace can count as a high or a low. That means that both A2345 and AKQJT are valid hands for those purposes.

You’ll notice that the order of the hand strengths do not necessarily correlate to the highest paying hands, and that’s an important part of how this pay table affects strategy in this game.

You can choose to wager from one to five coins per hand in online Regal Poker games, but there’s a bit of a catch. If you play with two coins, you’ll see that the payouts double compared to wagering with just one. Likewise, three or four coins will triple or quadruple the payouts comparatively.

However, playing with five coins will actually increase the royal flush payout by more than 5x, which makes it the best-paying option overall.

There is a resulting payout penalty for playing with fewer than five coins, and that’s why you should never do it in this game. That’s something that holds across a lot of different types of video poker, but it’s especially true here where you don’t have other gameplay elements like wild cards to try to give you extra chances at other big pays.

Depending on the software provider you play with, you can end up with a gamble feature as an available side bet option. The basic premise is that a card will be randomly selected from the deck, and you’ll choose a card from a few options in an attempt to pick a card that is of a higher rank.

If you do this successfully, then you will double your total wager. However, if you guess incorrectly, then you lose your wager. This double or nothing style approach adds another element of volatility, but it doesn’t actually impact your payout rate overall since it’s a break even proposition in the long run.

Strategy for most styles of non-wild video poker are somewhat similar in the sense that the foundations of the game are the same. With the 8/5 style payout table (ie: 8x for a full house and 5x for a flush), players may be tempted to apply an 8/5 Jacks or Better standard strategy to this game because a lot of the pay table is similar.

However, this is a bit of a mistake. The reason for that is that there are some key situations where you will lose a tremendous amount of value by playing the same way in this game as you do in that game, especially with the smallest pairs involved or pairs of aces in your hand. This is because of how the staggered four of a kind payouts work and the value taken from the lower end of the pay table to compensate for those boosted wins.

The thing to know about Regal Poker online poker is that it offers some special top payouts without kicking the volatility up into overdrive. That’s great news for players who want a level of volatility similar to something like Kings or Better Joker Poker without having to incorporate progressive jackpots or wild cards into their play.

Overall, Regal Poker is a staple of the video poker fan’s repertoire no matter if you’re a strategic player who likes to put in a lot of time to study or if you’re a recreational player who just wants to hop right in.

Which online casinos have Regal Poker?