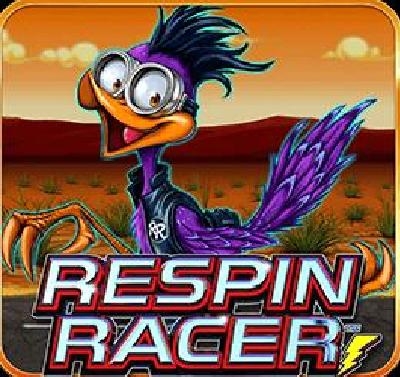 The Respin Racer online slot by Lightning Box gives players a funny cast of animal-based characters on a variety of motorcycles and other small vehicles. An extra ante bet gives you access to an extra expanding wild symbol, and the respin feature gives players a chance to win several times over and over again.

An Introduction to the Respin Racer Slot

In what’s obviously a bit of a nod to certain Looney Tunes cartoon characters, Lightning Box’s Respin Racer video slot is based around the premise that there are a handful of animals riding different types of two-wheeled vehicles out on the road in the desert.

This is a funny premise that’s taken even further when you look at just how good the graphics are and how much personality each of the characters has as a result.

It’s a very visually pleasing slot, and it’s up there with some of the best graphics that we’ve seen in this style of animation. With that having been said, graphics aren’t the only thing that this title has going for it.

The gameplay is also super solid with a focus on giving players several ways to get paid, including multi-line win opportunities, which drives a tremendous amount of action that will appeal to a large audience.

The format used in this title is normal enough, but there are some things about it that are a bit different than what you might think from your initial look. Here’s what you’ll get:

On top of all of this, you’ll see an ignition switch on the right-hand side that says “Ante Bet.” This can be turned on or off, and it affects the gameplay (as you’ll see below when we look at the features). However, it costs an additional wager per spin.

The features of this title come together in a way that increases the volatility quite a bit. However, they also give you ways to win some serious payouts, so make sure that you understand how they work before you jump on in and play.

For a small fee each spin, you can add an additional wild to the third reel; they normally only appear on the second and fourth reels. We recommend that you use this side bet since it increases your RTP percentage, but you may need to drop your overall bet size down a bit to make it fit within your bankroll management strategy otherwise.

On the second and fourth reels, you’ll see a kangaroo on a chopper motorcycle. This is the wild symbol, and as we mentioned above, if you have the ante wager on, then you will also have him appear on the third reel as well.

The really important part about this wild is that it expands to cover the entire reel whenever it shows up. That makes multi-line wins a lot easier to get, and it also makes it a whole lot easier to get wins that you would have missed out on otherwise.

However, it also increases the volatility of the game as a whole, and it also can’t make its own winning combinations because it can only show up on the middle three reels. That’s made up for by the tremendous amount of value that it can give you, especially if you get more than one of them on the reels at the same time.

The Respin Racer online slot’s name largely comes from the Respin Bonus Feature. What you’ll find is that some of the symbols on the first and last reel will show up with a golden frame around their edges. They function normally otherwise, but this golden frame can help you to trigger the bonus feature.

When the first and last reels all contain the same symbol from the purple roadrunner, the gas pumps, the mouse, the turtle and the bear, where all six positions are the same and also have a golden frame, then you will activate the feature.

Overall, this is really just a way for them to randomly give the feature out.

The way this feature works is that the first and last reels will stay the same, and you will start off with three respins for the middle three reels. Additionally, you’ll get a multiplier of either 4x, 6x or 9x on all of your wins for the feature.

If you hit a wild symbol anywhere on the game board, your number of respins is reset to three. They will keep spinning along these lines until you run out of respins, and note that the expanding wilds are still active in this feature.

How to Win at Respin Racer

There are two things that you need to do to adjust to how the Respin Racer video slot is set up. The first thing you need to do is make sure that you always play with the ante bet turned on.

Playing without the ante bet will give you a smaller bet size, but it will also give you a disproportionately smaller payout rate.

The second thing you should do is make sure that you account for the fact that the bet size will be slightly larger due to the side bet and that the volatility of this game is fairly high. You can adjust to both at the same time by lowering your base bet size down a notch or two from what you’d normally be comfortable with. This will protect you from the swings to a greater extent.

The top-paying symbol in this game is the set of three gas pumps, and it pays 150x for five of a kind. It’s also the only symbol in this slot that will pay for just two on a payline. From there, you can win 125x for five of the mouse on a pink motor scooter. There’s also a win of 100x for five of either the turtle on a motorcycle of the bear on a tiny bike.

The card rank symbols are all decorated in symbols that make sense for this title’s theme. The purple A and red K pay 75x for five of a kind. You can get 50x for five of the yellow Q symbol, the blue J symbol or the orange 10 as well.

The key thing to understand about the Respin Racer slot by Lightning Box is that it does have a high volatility, but it also has a really great visual appeal with a strong soundtrack, and the feature set is very exciting.

If you’re the type of player who doesn’t mind a bit of volatility in exchange for an action-oriented style of play, then this is definitely a slot that you’ll want to try out. It really brings all of the positives of this type of game with very few of the negatives, and those negatives are mitigated in various ways when they do appear.

Which online casinos have Respin Racer?