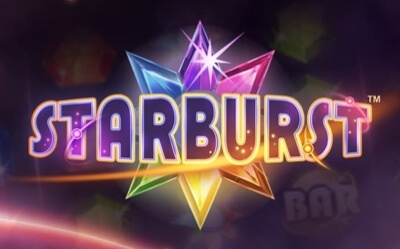 In 2012 gaming powerhouse NetEnt released Starburst, a simple video slot that took the casino world by storm. Even after all this time, after all the modern innovations and countless new titles, players are still returning to this gem fest favourite. As expected from such a top software provider, the graphics and gameplay are both on point, but what else does Starburst offer to keep fans coming back for more after all these years? We find out with the following review and provide a selection of the best sites for enjoying hours of star bursting fun.

Combining old school symbols, such as sevens and bars, with glittering gems made popular by the contemporary candy crush generation, the game oozes a timeless vibe. Despite rapid advances in technology, the slot’s slick images still stand the test of time, effortlessly competing with the hottest new releases. A soothing cosmic soundtrack accompanies the action, with sudden blasts of acoustic energy alerting punters to successful spins.

The game takes place on a modest backdrop of purple hues, littered with a multi-coloured, multi-shaped assortment of jewels. The lowest value of which is the purple gem, followed by the blue, orange, green and yellow, with the traditional seven and bar symbols offering the highest payouts. However, it’s the lucrative Starburst Wild that players will hope to see splashing an explosion of colour across the screen and securing the biggest wins.

Boasting a typical 5 x 3 grid, the game’s simplicity lends to its success, which is also given a huge boost by its win both ways feature. Despite its standard 10 payline set-up, wins pay both ways, meaning successful spins can take place from left to right and right to left. This naturally improves the frequency of lining up symbols and rewards greater payouts as a result. Lucky punters who land a five symbol combination across the reels can essentially enjoy double profits.

Another plus point is Starburst’s wide betting range and limit, with 10 bet levels and wagers starting as little as 0.10 and increasing to a relatively high maximum of 100. Over the years, this variety has endeared the slot to newbies and experienced gamers alike, both those on a budget and high rollers. In addition, the game is available to play across all platforms, with Starburst Touch providing the same quality graphics, smooth gameplay and entertainment value as the desktop version on tablets and mobile phones.

Many of today’s video slots attempt to gain popularity by packing a multitude of complex features and high octane bonus rounds into multi-layered worlds and levels. In contrast, Starburst strips back all the frills for a couple of no nonsense treats that enhance the fun factor while keeping things seamlessly simple.

The now iconic Starburst Wild can appear on reels two, three and four. Once one or more of these symbols have landed, they expand to turn the entire reel wild, offering plenty of potential for hitting that eye-catching 50,000 jackpot. Not only that, but the Starburst Wild remains in place and triggers a re-spin, with any subsequent successful wilds doing the same, with a total of three re-spins up for grabs.

Starburst’s arcade style, galactic theme, beautiful 3D graphics and satisfying soundtrack have certainly added to the slot’s worldwide appeal. The fact that the game is often included in casino welcome packages is testament to its ongoing popularity and revered status.

Another advantage is its straightforward approach, which allows any player to start spinning, regardless of experience, and get to grips with the slot instantly. Starburst’s impressive RTP rating, win both ways format and exciting expanding wilds, which land surprisingly frequently, are perhaps the greatest contributors to the game’s success, and should continue to delight players long into the future.

Which online casinos have Starburst?