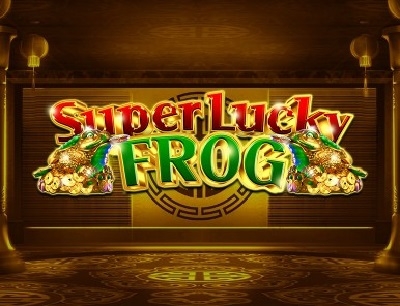 The Super Lucky Frog online slot by Blueprint Gaming offers players an experience with massive top payouts, frequent wild symbols and a wealth-oriented Asian theme that looks great. On top of that, you can win free spins with multipliers as high as 10x to give you even more chances for big payouts.

An Introduction to Super Lucky Frog

The wealth-themed Super Lucky Frog video slot is a game produced by Blueprint Gaming with a focus on traditional video slot-style play. This game doesn’t get too far outside of the box, but that’s okay.

This is a title designed to be well within the standard ideas of what people have regarding a video slot, and that’s exactly what many players want.

As far as how the gameplay is set up, you’re not going to see anything too over-the-top here. There are some good features and a top-heavy pay table that lend themselves to a high volatility and opportunities to win some really serious top payouts.

In terms of the presentation, you’ll be playing with a great golden hall behind the reels, and you’ll see plenty of gold symbols in a style of graphics that is almost 3-D. It definitely has some Asian flavor to it as well.

The layout for this game isn’t too crazy, and here’s what you’ll be getting into with it:

We also want to point out that all of the payouts in this game center around multiplying the total bet size. This means that you don’t have to do any mental math while you’re playing to try to figure out how much cash you’d be paid in the event of specific types of wins.

The gameplay is pretty straightforward for this game. Blueprint Gaming decided to go with something that was solid and proven instead of getting too far outside of the box for this particular title. We think that’s a fine approach considering how well they did the usual thing here and how much differentiation it offers from the usual low-volatility games that have a similar set of features, considering this is in fact a high-volatility slot.

The lucky cats are wild in this game. You may have seen them in shops or other locations before in a similar style because they are a common symbol of luck in certain Asian cultures.

You can get the following payouts for just wild symbols on a payline:

If you make a combination of wilds, but using them to create a larger combo of another symbol would give you a better prize, then you’ll always get the higher win. To make this clear, you’ll always win the best possible payout on each of the 20 paylines.

The wilds help you to get plenty of wins that you would have otherwise missed out on while also being responsible for the largest single-line win available in the regular game mode. They do not, however, substitute for the scatter symbols.

The name of the Super Lucky Frog online slot is tied to the scatter for this game, which is a golden lucky frog with the word “Bonus” inscribed. This is the second most important symbol in the game after the wild golden cat.

You will trigger a free spins bonus feature by getting at least three of this symbol anywhere on the game board at the same time.

It doesn’t matter if they are on the same payline or consecutive reels or anything else. If you can see them on the 5×3 grid after the spin has completed, then you get to trigger the feature.

Once you trigger the free spins feature, then you get to select from two sets of four symbols each. The first set randomly determines how many free spins you’ll receive, and the second will tell you the multiplier for all of your wins during the feature.

Here are a few things you should know about this free spins bonus round:

It’s also worth noting that you get better reels than usual with more favorable chances to win during this feature, which contributes even more to the overall value that it brings to the table.

How to Win at Super Lucky Frog

The first thing you need to recognize when you start to play the Super Lucky Frog video slot is that the volatility is pretty high considering that this title does not have a progressive jackpot. That is the main determining factor for the type of betting strategy that you use.

We recommend that players adjust to this by using a somewhat smaller bet size (perhaps a level or two lower) than what they would usually go with. Additionally, we suggest pairing this with playing a bit faster so that you get yourself in a position to play more spins her session, which in turn has you wagering about the same total amount that you would normally.

The card rank wins are all 50x for five of a kind for the A, K, Q, J, 10 and 9 symbols, so they are particularly easy to keep up with while you’re playing without having to refer to the pay table over and over.

This is the type of game that will be somewhat divisive among players simply because of the traditional gameplay style. Here are the pros of what we found that we like about it:

Along with that, here are some things some players may not prefer about this slot:

Overall, we think many players will love this game and give it a shot based on the strong features and larger payouts than what you normally see.