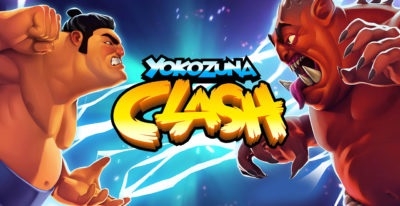 Yokozuna Clash is a sumo wrestling-themed online slot by Yggdrasil Gaming. It offers super-strong graphics along with a gameplay style that brings a lot of action with multiple levels of free spins that can give extra wilds and multipliers of up to 4x as you try to progress through the different levels of a sumo wrestling tournament.

An Introduction to Yokozuna Clash

There is a long tradition of sumo wrestling in Japan, and while it’s practiced in a lot of the world, there’s no other place where it’s taken as seriously. The top-ranking sumo wrestler is known as the Yokozuna, and the Yokozuna Clash video slot by Yggdrasil Gaming is based around this powerful sport.

The premise of this game is that you’re trying to win a sumo tournament with escalating free spins features.

This slot is particularly visually pleasing. It looks awesome with a crowd all around in a tournament hall where sumo wrestling matches are happening.

In a typical sumo wrestling match, you win by pushing your opponent out of the circle or by them touching the ground with something other than their feet. The rules are a little different in this slot, but the basic idea is the same, and the more opponents you can outlast, the better features and rewards you will be given.

Action is the name of the game for the Yokozuna Clash online slot, and you can see that it starts from the way the format is set up. We also want to point out how accessible they have made the available bet sizes so that you can get in on the game for particularly low amounts.

The accessibility on the lower end of the cost scale is characteristic of Yggdrasil, and that’s something that their players really appreciate because it allows penny players to enjoy the game more comfortably.

Most of the gameplay in the Yokozuna Clash slot is about the sumo tournament and its related features. However, the regular gameplay is exciting as well since it uses the “all ways” format to give a high hit-rate with a low volatility and lots of ways to get multiple pays on the same spin.

Note that all of the payouts we talk about here are multiplied by the bet size and not by the size of the coins.

There’s a golden wild symbol that you can find on each of the five reels. They give some of the best payouts in the game, which we have noted here:

The free spins symbol, which we’ll get into below, will not be substituted for by the wild, and that’s the only symbol that it will not count for. With that said, in all-ways format games, wild symbols are particularly important because they open up so many more extra ways to get paid, even if just one shows up, than what you find in other games with a more standard layout.

If you get any winning combination that’s five of a kind, whether it’s in the regular game mode or the free spins, you’ll see a sumo wrestling match go down that will cause between two and five extra symbols to hit the reels.

This feature activates after the payouts are given to you normally, so you won’t miss out on anything by these symbols being placed.

The highest-paying five of a kind win will be the one that determines the symbols used for this feature. When it activates, two, three or four extra symbols will be added to the reels, and that can multiply the size of your payouts tremendously. This is why the top-paying prizes are listed at deceptively low levels in this game.

Note if you get five of the wilds in this way, you’ll be given the clash feature for the top-paying red bird symbol instead of additional wilds.

Get two free spins symbols on the game board at once to activate the sumo tournament feature. On each round of the tournament, one of the available opponents will be chosen at random. These opponents determine which kinds of extra features you get during the bonus round.

The basic idea here is that you’ll attack your opponent every time that you get a winning combination on the reels. There’s a meter at the bottom of the screen above the controls that shows your exact positioning. If you push the opponent out, then you win and go to the next round. If you get pushed out, you lose and the feature comes to an end.

The player will be given one of these two characters to begin at random:

Your semi-final opponents are Daisuke or O’Conner. They can add wilds or multipliers when they attack, respectively.

In the finals, you’ll always face the demonic Yokozuna. He adds both random wilds and multipliers, but he has a higher attack power. However, if you beat him, then all of your wins from the entire free spins feature are multiplied by a factor of two. That’s a feature players are sure to be happy with.

How to Win at Yokozuna Clash

A huge amount of value in this game is tied up in the free spins mode, so you’ll be behind on average in your sessions where you don’t trigger it. Along with that, the volatility of the game in general is pretty low, and that’s worth mentioning because it gives us a strong strategy to use.

Our recommended strategy for the Yokozuna Clash video slot is to pick a larger bet size than you would normally use and to play normal-length sessions with that bet size. The low volatility will keep the swings from being bad at all, and you’ll maximize the chances of getting big wins when you hit the feature.

Four great-looking animal symbols make up the top tier of wins. The red bird pays 12x for five, and you can get 10x for five of the purple tiger. The green turtle earns you 8x when you line up five of a kind, and five of the blue dragon is worth 6x.

At the lower end, there are four card suit symbols that are designed in a gorgeous way. Five of any of these four pay out 0.8x.

From the graphics to the game concept and features, the Yokozuna Clash online slot is a solid example of Yggdrasil Gaming’s particularly high level of quality. They’ve brought the gameplay up a notch by incorporating the concept of the slot into the actual play itself, and that’s the kind of thing that we really love to see.