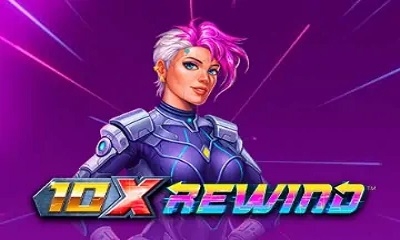 The 10x Rewind online slot is a time travel-themed title from Yggdrasil Gaming. Players have 4,096 ways to win in this game. However, the real treat comes from the ability to improve on previous wins with time travel-inspired features.

An Introduction to 10x Rewind

We can really leave it to Yggdrasil Gaming to come up with something different. That’s exactly what they’ve done with several of their titles over the years, and it’s exactly what happened with their 10x Rewind video slot.

Having both the theme and the gameplay be centered around time travel is something we’ve never seen before.

In terms of how the game looks, you’re getting a theme that’s about what you’d expect. Time travel-based media is usually set in some type of cyberpunk-like futuristic setting. You’ll have that, particularly with the main character in her armor and pink and white hair. Additionally, the background shows the typical graphic of moving through space-time quickly. On the reels are tons of different symbols from different periods of time as well.

As cool as the presentation is, the gameplay is super interesting as well. It’s all about taking advantage of the time travel theme. We’ll have to get into more detail below about how this works. However, it suffices to say that they did a great job incorporating this into the gameplay and features. Additionally, the base format itself offers a ton of action.

The layout here offers many ways to get paid. It’s pretty easy to get used to, so we’ll show you what to expect here:

The volatility of this title is in the medium-high range. This comes from the way the features drive the pay schedule to be particularly top-heavy. While the hit-rate is pretty reasonable, the regular pay table is unbalanced enough that the volatility isn’t lowered as a result. We’ll go into how to adjust to this above-average level of volatility further down.

With its time travel theme, the 10x Rewind online slot brings features that match that motif. This theme is found in every aspect of the game, including the symbol set, so it’s not surprising that they incorporated it into the features as well. You’ll really want to check out what we explain below, however, because some of these features are pretty atypical.

The main character for this game is the time traveling woman. She has on a purple futuristic space armor, and her hair is pink and white. If you’re curious about the potential inspiration for such a character, she’s very similar to a popular video game character.

In any case, she helps you to get extra payouts in this game because she’s wild. Additionally, that’s a bigger in this title than most others because of the format. With 4,096 ways to win, you’ll have even more opportunities for each individual wild to pay out.

The only win this symbol gets on its own is for six of a kind. That will yield a 6x win. Like all payouts in this game, it’s multiplied by the total amount of your wager. The only symbol this wild doesn’t substitute for is the scattered bonus symbol.

The free spins mode in this game is called “Win Spins.” That’s because it goes back in time and picks up wins that you’ve already had. You trigger this feature by getting three of the scattered “Win Spins” symbols on the board at once.

When you get these, you’ll pick one of the three scatters. This will randomly give you five, seven or ten of these spins.

Each previous win you replay has three different ways to increase your winnings. You’ll do this by getting multipliers, extra spins or straight cash payouts. The multipliers can be up to 3x. However, you can also pick up as many as five more spins at a time. From there, payouts worth 0.5x to 10x of your total bet size can also be had.

Yggdrasil Gaming did something interesting with the mobile version of this game. It gives you two options if you are playing in portrait mode. That means the phone is held so that it is taller vertically than it is wide horizontally.

The first way you can play is with the reels positioned normally on the screen. However, this bunches things together a lot and makes the symbols smaller. Additionally, it leaves tons of empty space at the top and bottom of the screen.

That’s why Yggdrasil came up with their “Big Reel Portrait Mode” approach. This rotates the reels so that they spin from right to left with payouts that go from top to bottom. It’s basically a situation with the reels rotated so that they fit the screen better. None of the features or basic gameplay changes at all. This just makes it easier to fit everything on your phone in a visually pleasing way.

How to Win at 10x Rewind

With an above-average volatility like what this game has, slightly decreasing your bet size is the common adjustment. The idea behind that is that it shields you from the swings quite a bit. However, you can compensate by using the autoplay option or simply playing more quickly to get in the same total amount in bets per session. Alternatively, you’re welcome to play at your normal speed as well.

Four scenes from different time periods are used as the top-paying symbols. The blue scene with the astronauts pays 6x for six. Additionally, you can earn the same win for the yellow cowboy scene. However, both the green knights and red gladiator scenes pay 4x for six. Note that all four of these symbols pay for just two of a kind as well.

The card rank symbols are shown with different things from different periods of time. With the red A and blue K, you can earn 2.5x for six of a kind. Six of the orange Q and cyan J get you 2x each for six. Additionally, wins of 1.5x are had for six of a kind combinations of the yellow 10 or green 9.

The hit-rate of the bonus features in this title is large enough that slot players will definitely not get tired of playing. As if that wasn’t enough, compared to other video slots that utilize similar driving ideas, this video slot differentiates itself in a few areas compared to just being like everything else.

In addition to that, the gameplay style is something that is centered on action with a tremendous amount of opportunities to come out on top. The aesthetic appeal of this title is great and boosts the entire style of gameplay, and as a part of this developer’s portfolio as a whole, this is a slot that holds an important job because it is a strong fit to so many people.

Which online casinos have 10x Rewind?

What is the Return to Player (RTP) for 10x Rewind?