All Star Knockout Casinos and Review 2021 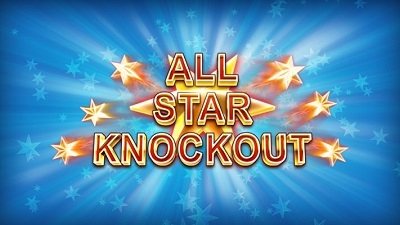 The All Star Knockout video slot by Yggdrasil Gaming, in conjunction with Northern Lights Gaming, allows players to collect stars that are randomly assigned to different symbols on a chart at the bottom of the screen. This leads to re-spins, free spins, multipliers and all kinds of other goodies.

Casinos with All Star Knockout

An Introduction to All Star Knockout

Sometimes it can seem like everything has been done in a video slot that could be done and that everything providers do in newer games is just rehashed versions of what you’ve already seen. Yggdrasil Gaming takes issue with this concept, which is really easily seen with the All Star Knockout online slot.

This game centers completely around a feature-providing dynamic that we have never seen implemented before quite like this.

The visual style is all centered around somewhere between a classic bingo game and the theme of older styles of fruit machine slots. The board is split into two parts that serve two different functions, but the reels are still the main part of the gameplay.

In terms of how the features and play style work, there are lots of opportunities to win, and you’re constantly being given visual reminders of how close you are to activating the main free spins feature, which is where a ton of value is located.

The format can throw people off just because of how it looks at first glance, but it’s not really outside of the box to any serious degree. Here’s what to expect:

The volatility in this game is in the medium to medium-low range. It’s not super low by any means, but you’re also not going to have to worry much about any kind of massive swings coming your way and throwing you off.

Those empty star spots at the bottom of the reels are really the key to the whole game, and we’re going to show you why they matter and what all features are available.

Star Collection and Award Board

Star symbols can appear on the reels. They do not give payouts, but they do interact with the star collection feature that’s key to the star spots at the bottom of the reels.

The idea here is that stars that land on the game board will randomly be assigned to one of the eight symbols shown in boxes at the bottom of the screen.

There are other ways to get stars as well, and we’ll get into that down below. However, understand that because the paylines are more spread out than you’d normally see since there are 20 lines on a 5×4 format, you don’t have to worry about these symbols blocking what would otherwise have been potentially paying lines so much. The value they give is much more important.

Whenever you start playing this game, you’ll automatically be awarded 12 random stars. If you ever find yourself with the board completely empty for some reason, which can happen as we’ll look at below, you’ll also be awarded 12 stars to begin with.

The low stars bonus plays into this as well. If you have from one to four stars, you’ll activate a bonus round and be given a re-spin with more stars to add to your total.

When you fill up one of the boxes at the bottom of the screen in the All Star Knockout online slot, then you’ll activate the All Star Knockout bonus round. The way this work is that this symbol will be removed from the reels completely, and the fewer symbols on the reels, the better your chances are of hitting winning combinations with the remaining symbols.

You start with five free spins with these adjusted reels. For each additional award box that is filled during this feature, you’ll get two extra free spins. Note that you will be able to remove multiple symbols from the game board in this way.

Once the feature is over, the respective symbols have their boxes cleared, but the remaining stars will stay in place. This means that you won’t have to worry about losing progress due to stars being removed after this bonus round since the stars that weren’t for the knocked out symbols will stay there until they activate their own feature.

Something that adds another level of excitement to the All Star Knockout video slot is that there’s a random bonus opportunity on every single spin. On each spin, you get a random chance to activate a win spin with more re-spins to come after that.

On a win spin, you’ll be guaranteed a payout of some type.

From there, the reels will continue to spin for free re-spins until you hit a losing spin. You can run up multiple payouts on these free chances to win without having to pay for those additional turns.

How to Win at All Star Knockout

The volatility of this game is on up well into the medium-low range. That means that you don’t have as many opportunities to adjust your bet size as you would if it was a bit lower or even if it was a lot higher.

Because of this, our recommended strategy is to simply keep your bets in the size range that you’re the most comfortable with. However, you should generally pick one size and stick to it since the stars at the bottom of the game board are tied to each individual level of stakes, so you don’t want to be bouncing around too much since you won’t be able to use the stars you’ve accumulated until you get back to that same level of stakes.

There are eight paying symbols in this game. They are broken up into two groups accordingly.

For the upper group, you have four different square symbols. The highest paying is the KO symbol, which gives a 5x win. You can also pick up a lucky red seven with five of a kind for 4x, five of the white lucky seven for 3x or five of a kind combinations of the blue lucky seven, which will get you 2x.

Remember that all of these payouts are multiples of your whole bet size and not of the coins.

If you like feature-based gameplay that centers largely around different types of bonus features and ways to trigger them, then the gameplay dynamics found in the All Star Knockout online slot will really appeal to you.

The pay table is fairly flat and balanced to keep the swings lower, but the features add enough volatility to keep things interesting with chances to take down some pretty serious wins thanks to the symbol removal feature and the multiple ways to get into the bonus features.