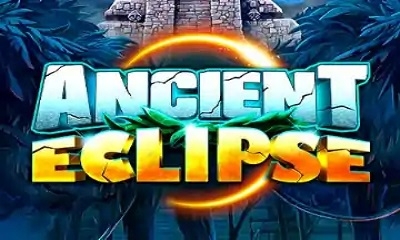 Yggdrasil Gaming’s Ancient Eclipse online slot takes players to the jungle in ancient ruins. You’ll have chances to win free spins and wild payouts thanks to the feature set. Everything in this game centers around the eclipse concept, which has been a holy happening in many cultures.

An Introduction to Ancient Eclipse

The one thing that we have seen players love above just about all else is cohesion in online slots. When all of the parts of a game come together to form one solid experience, it’s always well-received.

This is the case with the Ancient Eclipse video slot from Yggdrasil Gaming. It’s an awesome title with lots of separate parts that combine in this way.

When you first play this title, the visual appeal is the first thing that will stand out. Additionally, the game itself is framed really well by an in-depth background. Fog coming from the jungle toward the stone ruins of the reels is a very compelling visual. Aside from that, the symbol set is highly detailed and looks amazing.

The gameplay has not been forgotten either, however. What you’ll find is a set of features that drive a ton of action. At the same time, the regular pay table brings plenty of wins. Along the lines of the above, the features make sense in terms of the theme of the game. This is one of the biggest things that adds to the high level of cohesion found in this title.

The initial format of a game like this is always important. It provides the foundation for how the entire game experience can go. The layout used in this particular title is easy to get used to. However, it also provides for an action-oriented experience. Here’s what to expect:

The last thing to know about the layout and format is that the volatility is very reasonable. It resides in a medium-low range, which is a bit below-average. However, it’s not quite what we would call “low” in and of itself. That puts it in a range that most players can be comfortable with, and it keeps the swings from being excessive the vast majority of the time.

We really enjoy the combination of features found in the Ancient Eclipse online slot. It’s a mix that you don’t always see put together. However, it also includes features based on the eclipse concept that we can’t remember seeing in other games. As such, you get a good mix of typical and atypical types of features.

The regular wild symbols in this game are golden circles with a face. The face is sticking its tongue out as well. These wilds appear on all five reels, and they substitute for all of the regular symbols as well. The following payouts are associated with winning combinations of just wild symbols:

Because the Ancient Eclipse video slot does payouts based on the total bet size, these wins can be misleading. To give you an idea, with 50 paylines, a 10x win here would be like 500x wins with line-based pays. It’s a pretty solid top prize, but it’s still tempered enough to keep the volatility reasonable.

Going along with the theme of this title, the Wild Eclipse Feature is a major part of the gameplay. It works based around two different symbols and their interplay. Here are the two symbols:

The moon symbols can land anywhere on the game board during regular gameplay. However, when it leaves a position, it leaves a golden sun frame on that spot. There is no limit to the number of golden frames you can have.

However, when a moon lands on one of the spots with a golden frame, then the feature is triggered. With this Wild Eclipse, every position that has a golden frame is turned wild for that spin. That means that you can end up with several wilds all on the reels at the same time. With 50 paylines, that adds up to some serious chances for more wins than you would have otherwise received.

Note two things about this feature. First, scatters still count even if they’re turned wild. Second, the wilds from this feature can help get wild winning combinations as noted above.

On the middle three reels, you’ll sometimes see scatter symbols. They are of a warrior with a blue face and a golden headdress with red feathers. If you’re able to pick up one of these on the second, third and fourth reels at the same time, then you will trigger the Sticky Sun Free Spins mode.

Players are always given 10 free spins for this feature. The way it works is that all non-Wild Eclipse triggering spins get something special. However, that something special is that all of the moon symbols add an extra free spin to the total. Note that this feature cannot be re-triggered in the traditional sense with scatters. That means the moon symbols are the only way to extend your free spins.

How to Win at Ancient Eclipse

Since the Ancient Eclipse video slot has a medium-low volatility, the swings are generally minimal. Additionally, you have the ability to take advantage of this with a slightly increased bet size compared to what you’d otherwise use. By increasing your wager by a third to a half, you’ll make two things happen.

First, your swings will stay pretty reasonable because of the medium-low volatility. Second, you will have the opportunity to get better wins. This is because all wins are a multiple of the total amount you’re wagering.

Other than the wild, the two high-paying symbols are stone faces. The red one gets you 5x for five, and five of the purple is worth 4x. Three mid-level symbols pay reasonably as well. They are all animal faces looking to the left. The purple one pays out 3.5x for five. You can also earn 2.5x or 2x for five of the blue or green, respectively.

Something we like a lot about the symbol set is how they handled the low-tier symbols. The purple spade, red heart, green diamond and blue club make up the low level wins. They all pay 1x for five of a kind. However, they’re all styled in the same stone concept as the rest, which makes them look great.

Compared to other games that utilize related driving concepts, the Ancient Eclipse online slot stands out in a number of ways as opposed to only being one in the same. The feature set offers a variety of different extra ways to win on top of the normal pay table offering, and because of the serious appeal to a whole lot of people, this video slot has a perfect spot in this software company’s portfolio as a whole.