Book of Fallen Casinos and Review 2021 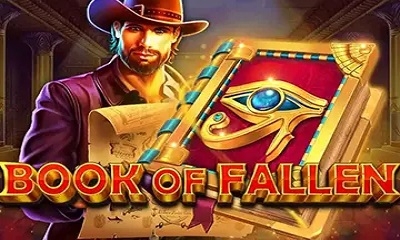 The Book of Fallen online slot is a title from Pragmatic Play with an Egyptian exploration theme. Its gameplay is based largely around expanding symbols that give you more payouts than usual. However, it also has a combined scatter and wild that brings a lot of value as well.

Casinos with Book of Fallen

An Introduction to Book of Fallen

Something we often see in the online slots industry is a game with a familiar theme and features that aren’t particularly inspiring. It seems that a lot of developers have the philosophy of “if it’s not broken, don’t fix it.” Thankfully, Pragmatic Play doesn’t share these feelings, and because of that, we have games like the Book of Fallen video slot.

While this game’s theme will be familiar, the gameplay is anything but.

From a visual standpoint, you’ll find yourself deep in an Ancient Egyptian tomb. Treasure and golden markings are everywhere, and the animated light gives a really nice feel. Additionally, the symbols on the game board have a lot of detail and look great. Even the card rank symbols at the low end of the pay table are stylistically designed.

It’s the gameplay that’s going to stand out the most for most players, however. This comes from a combination of features that aren’t used all that often. However, they still fit into the theme pretty well, and none of them stand out as being a bit disjointed like what you can find with some other Egyptian-themed titles. As a result, the theme and gameplay come together to create a particularly cohesive experience for players.

The way the format and betting are set up is perfect for the feature set. Along these lines, it’s also really easy to just jump right into. Here we’ll show you what to expect:

You’ll also notice that a side bet for a “Super Spin” is available to the left side of the game board. We’ll get into how that works down below.

The volatility of this game as a whole is in the medium range. However, Pragmatic Play calls it “high” inside of their rules and game notes. This is because that’s comparing it to other titles from the same developer. Instead, we’re comparing it to slots from the industry as a whole.

We also want to point out that wins in this game are based on multiples of the total amount wagered. As such, you won’t have to keep up with coins per line, line bet wins and all of those other types of complications when figuring out how much you’ve won.

The feature set for the Book of Fallen online slot is where most of the action comes from. However, the regular pay table has some things about it that you’ll want to pay attention to as well. These two facets of the overall gameplay combine to create a really fun style of play. In the following, we’ll be breaking down everything you need to know about both parts of what this title offers.

The golden book with the Eye of Ra on it and a red cover is the wild symbol in this game. It appears on every single one of the reels to give you an easier time when it comes to getting winning payouts. However, with that said, it can also give players some pretty strong payouts on its own:

When you get wilds that are a part of winning combinations (or that make combinations themselves), the game evaluates them in a very specific way to make sure that you get the best payouts available. For each individual payline, it’s determined how you can get the best possible win for that line. However, each line is handled in this independent way. As such, wilds can behave differently on each payline. This means that in some cases, a single wild can substitute for two different symbols for two different winning combinations.

Aside from the above line-based wins, the wild book symbol also acts like a scatter. This is why it’s by far the most valuable symbol in the Book of Fallen video slot. However, that makes sense considering the game is literally named after it.

When you pick up three or more books anywhere on the game board, scattered wins will be awarded. They do not have to show up on any certain payline or on any particular reels. Appearing anywhere on the board at the end of the spin is sufficient for a win. Here are the scattered payouts you can earn with this symbol:

Keep in mind that these scattered payouts are calculated separately from the line bet wins. That means that the same wild symbols can give multiple payouts in this way.

While the number of scattered books determines your payouts, it doesn’t determine your number of free spins. Three or more of them gives you 10 free spins no matter how many trigger the feature. From there, you get to determine your own expanding symbol.

During these free spins, the expanding symbol will always expand after the free spin’s wins pay normally. However, these expanding symbols then give you an extra chance to win no matter where they’re positioned. These symbols pay from left to right regardless of which reels they’re on. For example, expanding symbols on the first, middle and last reels only would pay various combinations of three of a kind.

If you pick up three or more scatters at once during the free spins, you add 10 free spins. However, they will happen with the same expanding symbol. You aren’t allowed to choose a new one.

Side Bet and Super Spins

To the left side of the reels, you’ll see a switch for the side bet. This treats every regular spin like a free spin. However, it also costs 10 times the current value of your spin. If you choose to go with this option, you can turn it off at any time, and it’s completely optional.

However, if you do pick this option, keep in mind that you can decrease your base bet size. For example, if you were normally playing at €1 per spin, but dropped your size to €0.10 per spin instead, the super spins would cost you your original bet size of €1.

How to Win at Book of Fallen

If you’re playing this game normally, it has a medium volatility. The scattered wilds and free spins feature hold a lot of value, which increases the volatility a bit. However, the large number of symbols that pay for just two of a kind keep things balanced.

Additionally, you can play this game with the super spins exclusively. If you go that route, we strongly suggest dropping your starting bet size by quite a bit. The volatility will be higher as well, so that’s something to keep in mind.

Payout Structure for Book of Fallen

The lower end of things is rounded out by the card rank symbols. Both the red A and cyan K symbols get you 15x for five. Additionally, players can earn 10x for five of the purple Q, green J or blue 10.

Everything centers around fun with the Book of Fallen online slot, and that’s great for video slot fans who need an action-centric gameplay style. Also, because it offers a serious degree of quality while still having a ton of value individually, this video slot fits perfectly in Pragmatic Play’s offering of titles overall.

When compared to other video slots that utilize related driving ideas, this slot stands out in a handful areas compared to just being one of the sub-genre, and a serious number of bonus features are used in this game, which is something players can’t say for plenty of the competition. As if that wasn’t enough, the look and visual tone of this slot gives a gorgeous vibe that’s definitely in competition with most that the online casino industry overall has to offer.

Which online casinos have Book of Fallen?

What is the Return to Player (RTP) for Book of Fallen?