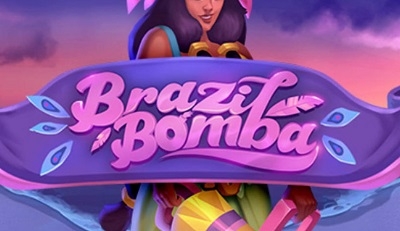 The Brazil Bomba online slot gives you tons of ways to win on a 48-spot grid with bombs that give you plenty of extra ways to get paid, free spins and multipliers that can increase after avalanche-style wins. The multipliers keep going to make your wins bigger and bigger after every single winning combination.

An Introduction to Brazil Bomba

Yggdrasil Gaming’s Brazil Bomba video slot brings you to the beaches of Brazil during a big celebration. You’ll see a dancer on the right-hand side of the ring holding a big bomb cannon that can be shot on the reels to give you tons of ways to get paid, which we’ll cover below.

It’s also worth pointing out that this title has a tremendous fireworks theme, and you can see them being shot off in the distance in the absolutely gorgeous animated background.

Despite the fact that the graphics and overall presentation are so good, it’s really the gameplay where this title shines the most. It has features that are accessible without seeming like there’s no reasonable chance for them to happen during short sessions, for example, and you have opportunities to win a really wide variety of prizes.

Everything about this title is set up to make it easy to get paid, and that’s exactly what you’ll be getting with the flexible layout. Here’s what to expect:

There are two key things to point out. First, the volatility for this game is pretty low, and it has a serious hit-rate with a ton of low and mid-level wins. In fact, the hit-rate in this sense is higher than the vast majority of titles we have reviewed here.

Second, the payouts that we describe for this game will be listed as the number of coins being paid out. If you want to know the payout as a multiple of the entire bet size, simply divide the listed payouts by a factor of 10.

The gameplay is the focus of the Brazil Bomba video slot, and we’re going to cover every aspect of it that you need to know about.

After every single winning combination that you get in this game, you’ll see the payouts given first, and then the winning symbols will explode into fireworks. This creates empty spaces that are then filled by symbols falling down from above.

In some games, that would leave empty spaces at the top of the reels. However, that’s not the case in this slot. Instead, new symbols will fall down into place until the entire 6×8 grid of symbols is completely full before wins are evaluated again.

For each avalanche, the multiplier will increase by a factor of one, and it will be listed in the giant circle apparatus on the right-hand side of the reels.

To make it clear how this works, suppose you have your regular spin; the multiplier will be 1x for those initial wins. If you get a payout and then have a win after the avalanche of symbols falls, that will be 2x. This continues to increase for each subsequent avalanche until there are no more wins to be had. At this point, the multiplier resets to 1x, and you start back into your next paid spin.

A bomb can show up as a symbol on any position in the middle four reels (ie: not the far-left or far-right columns). When it lands, after any winning combinations are evaluated and explode, this bomb will also explode.

This takes out up to 12 symbols, including a 3×3 grid around the bomb itself, and that creates more space for new symbols to fall down to create new winning combinations as a part of the avalanche feature.

You can trigger a free spins feature in the Brazil Bomba online slot by getting scattered free spins symbols on the game board.

Keep in mind that only one of these symbols can appear on each vertical row at a time.

When you get at least three of these, no matter where they appear, you’ll be awarded with free spins. You can get more free turns for more scatters along the following lines:

During the free spins mode, the multiplier on the right-hand side of the reels will not reset after the end of a set of avalanches. This means that it can increase further and further throughout the feature to give you much larger wins than you would have otherwise gotten.

How to Win at Brazil Bomba

The thing that you have to understand about this game is that there are a whole lot of small wins and medium wins that keep the volatility at a really low level. The swings are minimal, to say the least, and you can usually hit some pretty significant mid-level wins at some point in longer sessions thanks to the avalanche feature.

To account for this super low volatility and really significant hit-rate, we suggest trying out using a bet size worth about 1.5 to twice the size that you normally would. The idea here is that the swings will stay under control relative to the bet size that you would more typically use while giving you even bigger payouts for wins that come from major payouts on the regular pay table or from the free spins modes with its unusually high multiplier opportunities.

There are 12 symbols in this game broken up into two sets of six. All of them require clusters of at least six of a kind to make a winning combination.

The top regular prize is 10,000x for 48 of the red fireworks symbol. This drops down significantly through the ranks. To give you an idea of the scale, 20-spot clusters will get you 900x, 10-spot clusters are worth 200x, and six of a kind scores a solid 20x.

Something worth noting is all six of the lower-tier symbols have the exact same payouts. This keeps things fairly simple while also contributing even more to a lower volatility.

Yggdrasil Gaming did a really good job with bringing together the Brazil Bomba video slot in a way that would give players a lot of action without the atypical format being a nuisance. That can sometimes happen when players are taken too far “outside of the box,” but they avoided that type of issue here by maintaining a regular stream of small and medium wins.

This high hit-rate and the larger payouts available from the accumulating multipliers in the free spins mode come together to give players a type of experience that tends to be very popular, and it’s easy to see that Yggdrasil is able to make the gameplay fit just about any format or concept they can come up with.