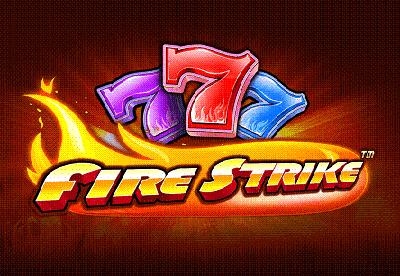 Pragmatic Play’s Fire Strike online slot centers around a scatter symbol-based play style that gives you chances to win one of 10 major prizes in addition to a massive 25,000x jackpot. This title has some influence from classic games but is clearly a video slot and offers fairly high volatility to go along with a fast-paced style of play.

An Introduction to Fire Strike

In the online slot world, different companies tend to put together games in somewhat different ways. With Pragmatic Play, they often have some elements that are a bit of a throwback to classic slots, and that’s even within their latest releases in the video slot genre.

The Fire Strike online slot does have some of these classic influences, but they do not overwhelm the player or dominate the game.

Instead, these elements are mostly visual while the gameplay is centered around a scatter and shooting for some pretty sizable jackpots. This play style is something that we do not see very often in the industry, and it will definitely appeal to a lot of players who prefer to get their value from the pay table.

The flame-based theme and concept look good for what it is, and the visual appeal is strong since the real focus is on the wins that you get from the regular pay table in this game.

The layout for this game is really straightforward because most of the gameplay centers around the scatters. Here’s what you’ll get:

The volatility of this title is definitely well above-average, so having so many increments of betting sizes is really useful for players who like to adjust their bankroll management strategies in the moment accordingly. It also yields a play style that centers around having a lower hit-rate but higher wins when the payouts do come.

The gameplay style for the Fire Strike video slot is all about the main pay table and the regular wins that you get instead of a bunch of bonus rounds that take you away from the normal game mode. While this may sound boring to some, the fact of the matter is that they’ve made up for it tremendously with some really serious prizes and opportunities for massive wins.

We also want to point out that all of the wins we mention here are multiples of the entire bet sizes and not of the line bet values, so that makes the payouts even more impressive.

First up is the Fire Strike Wild symbol. It’s really important that you do not mix this up with the regular Fire Strike symbol that we’ll get into below because they look almost identical. The main differences are that the wild actually says “WILD” in bold letters across the bottom-right corner, and the border of the center is thicker in a light orange instead of a dark red.

The following payouts are granted as the best regular payline wins available in the game for wild combinations:

It’s also important for us to note that this wild will substitute for every single symbol in the game, including the scattered Fire Strike symbol, and it’s also the key to hitting the biggest overall jackpot in the game, which we will note below. This wild also appears stacked occasionally, which is important to the overall gameplay for multiple reasons.

If you see a regular Fire Strike symbol that does not say “WILD” on it and has a dark red border, then that is the scatter. It’s hard to say whether the wild or scatter version of this symbol is actually the most important symbol in the overall game because they’re tied together so much, but there is one thing that’s for certain.

A tremendous amount of value is tied up in the scatter symbols in the Fire Strike online slot.

At the top of the reels, you’ll see payouts listed for different numbers of scatters on the reels. These scatters can appear stacked to make it even easier to hit these combinations. The wins start at 1x for six of a kind and go up to the following major win values:

Since these are multiples of the total bet size, you can find their line bet equivalents by multiplying them by 10, which really shows how large they are relative to the typical wins in video slots. This makes the top four scatter payouts 5,000x, 10,000x, 25,000x and 50,000x when listed as line bet pays, respectively, which are obviously tremendously large.

However, there is one jackpot left that’s even bigger.

This is like winning a payout of 250,000x in a game that lists the wins as line bet multiples instead of multiples of your entire wager.

To say that this is a large prize is a tremendous understatement. This is one of the largest static jackpots that we have ever seen in an online slot, and even if you were playing at just €1 per spin, it would be larger than many of the most popular progressive jackpots’ average payouts.

How to Win at Fire Strike

The main thing that dictates your strategy in this game is the fact that that volatility is really high. It may actually be the highest volatility game that we’ve ever seen that does not have a progressive jackpot.

With that in mind, you’ll definitely want to use a smaller bet size than you normally would to keep your bankroll management strategy in line. However, if you can increase the number of spins that you have in your sessions, that can also smooth out a lot of the swings while still giving you opportunities to take down the massive top jackpots available in this game.

The green diamonds start the mid-tier wins with 25x for five, and you can also earn 20x for the cash stack or 15x for the stack of casino chips for five of a kind of either. This descends to 12.5x and 10x for five of the cards or dice, respectively.

The bottom line with the Fire Strike slot by Pragmatic Play is that the style of play is atypical compared to what you usually see in the video slot industry, and with such massive prizes available, it’s easy to see why it would be a popular pick.

There’s no denying that this is a great way to shoot for some major prizes, especially if you’d like a break from some progressives with a different style of play.