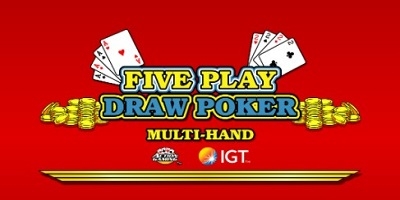 Five Play Draw Poker is a video poker game put together by International Game Technology. It has an “all in one” style with nine different pay tables to choose from with some options for wild cards. What sets it apart is that all of the available options are always played with five draws at a time to smooth out variance and boost your chances of winning.

The world of video poker is often divided among different games that can be a little cumbersome to move in and out of. There are few players who are only absolute specialists at a single game who never bounce around for different types of experiences.

The Five Play Draw Poker video poker game from International Game Technology offers players a more convenient and action-oriented way to play some of the most popular games ever produced in the video poker genre.

From a visual standpoint, the cards are very crisp with a classic video poker setting. You won’t see any unnecessary distractions here, and the layout is set up to take advantage of the play space without crowding everything too much. We’ll talk more about how the hands are displayed down below.

In terms of gameplay, it takes the video poker experience to a completely different level than what most players have ever seen before. On top of that, it adds even further to the tropes of the multi-hand games by adding in more variety and a better interface for viewing how the hands play out.

No matter which of the nine games you play that are available within the Five Play Draw Poker package, the gameplay procedure is largely the same. However, it is a little different than standard video poker, so we’re going to break things down here to show you exactly how it works.

This is pretty straightforward, even with the extra options, once you get used to the flow of the game, and you might find yourself switching things up every few hands just on whatever whims you get. This setup with multiple games allows you to do so without have to take so much time loading up a new game in each time you switch, which is a major edge for players who like variety.

In the following, we’re going to give a brief overview of each of the nine different poker games that are available in Five Play Draw Poker and give any particular notes about how the atypical format may affect them differently.

This is the game that most people will know the most about because it’s the most popular game in the genre. The volatility is pretty low, so having five hands played at a time adds a bit of spice to what many consider to be one of the more boring games in all of video poker.

The idea here is that this is essentially Jacks or Better with a slightly more top-heavy pay table. The variance and volatility are higher, but with five hands being played at a time, it’s not really something you need to worry about so much since things are smoothed out a bit, especially on bit drawing hands.

A bit of a variation on the Bonus Poker payouts as noted above, this game gives players a slightly higher volatility within the same basic pay table with things just a little more weighted toward the top-paying hands.

Some people see this as a direct variation of Bonus Poker, but it’s more of its own animal because it adds more extra hands at the top of the pay table to the point that it’s much more volatile of a game. It’s more for players who want to “go big or go home” than many of the other variations here.

Once again, we have a direct variation of Double Bonus Poker, but the payouts are made a bit more top-heavy. This increases the variance, but it also changes up the correct strategies enough that players will have to make different types of decisions than normal in many spots, especially if small pairs are involved.

Of all of the non-wild card games in Five Play Draw Poker, this is the game with the highest variance. It also boasts one of the highest levels of volatility in all of video poker for games that do not have wild cards or progressive jackpots, which is an impressive thing to be able to claim.

This game is the only title in this video poker machine that’s not played with a standard 52-card deck. Instead, you have 53 cards with a single joker added that can be used to make the best possible poker hand it can. The volatility is a little higher than Jacks or Better, but it’s not that far outside of the box.

As the most popular wild card video poker game available, it’s easy to see why this is one of the two games that most players will congregate toward when they first open up the game selection screen for this title. Four wilds are available in this game, giving it a high concentration of hands where you’ll start with at least a single wild.

Finally, we have what’s often considered the highest-volatility form of poker available that doesn’t use a progressive. Four cards are wild in this game, but you also have a stacked pay table with lots of wins at the upper end and smaller payouts at the lower tiers, which adds a tremendous amount of variance.

How to Win at Five Play Draw Poker

To maximize your chances of coming out on top in this game, you’ll need to pick one or two of the nine video poker machines available and really focus on learning the proper strategies. We suggest picking two games so that you can switch back and forth, and if you need somewhere to start, we think the combination of Joker Poker and Bonus Poker is the best mix of games with solid payout rates that are relatively easy to learn to play on a high level while not being particularly boring once you figure them out (much like Jacks or Better can be).

While we have strategy articles that can help you to make the right discard decisions, one thing you don’t have to worry about is the bet sizing because there is no coin system in this game, which is what trips some people up. Instead, you simply pick a bet size that works for you and get to playing.

The thing to understand about the Five Play Draw Poker game is that International Game Technology put it together to ultimately give players a better experience. It’s hard to have a video poker game that really breaks out of the box that far because history has shown us that players won’t really get into it. Instead, they prefer something familiar but with features that just make the experience go more smoothly.

Between the fact that you’re playing five hands at a time to smooth out the variance and the fact that you’re two clicks away from switching game types at any moment (instead of having to click several times and then wait on loading screens), that’s exactly what they’ve accomplished here.