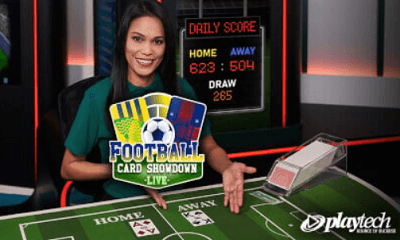 Football Card Showdown was released by Playtech at the end of November 2022. A straightforward game similar to Casino War, its design will appeal to sports fans, particularly those who enjoy their soccer. In this Football Card Showdown review, we’ll take a look at the rules, payouts and vital statistics of this release.

An Introduction to Football Card Showdown

Launched by Playtech on November 28 2022, Football Card Showdown is heavily influenced by Evolution’s Live Football Studio game. Along with Card Matchup by OnAir Entertainment, all of these games are similar in style and presentation.

They’re all based on the simple but popular casino game War. But the theme is designed to appeal to sports lovers. The table, for instance, is marked out to look like a football pitch. You’ll also spot a scoreboard in the corner that keeps track of the day’s results, as well as other soccer paraphernalia. The timing of the game’s release coincided with the start of the 2022 FIFA World Cup.

The rules of Football Card Showdown are extremely simple, with a main bet offering three choices: Home, Away and Draw. All you need to do is predict the result. There is also a small selection of side bets, all of which are straightforward 50-50 choices.

It’s match day at Playtech and you’ve got a ticket to the big event. Which team will prevail in this simple but fast-paced live casino table game?

How To Play Football Card Showdown

Football Card Showdown uses a shoe of eight standard 52-card decks. In each game, the dealer draws two cards, placing one in the Home position and the other in the Away section. The highest card determines which team is the winner. All you need to do is predict which side you think will win and bet accordingly.

If you’ve played Card Matchup by OnAir Entertainment or Evolution’s Live Football Studio, you’ll already be familiar with the rules. Determining the outcome of each game round is simple: the highest card wins. Aces count as 1, so Kings have the greatest value, and suits are not relevant.

If the two drawn cards are equal, the game is declared a draw. It’s worth noting that bets on the Home or Away team are not entirely lost in the event of a draw. 50% of your stake will be returned. Naturally, if you placed a draw bet, you’ll be paid in full.

At the beginning of a game, eight decks are shuffled together and placed into the shoe. The top card is then drawn and burned. Whatever the value of that card, further cards are discarded accordingly. For example, a 5 would mean five additional cards are burned.

For the main game, it’s simply a case of guessing which team will win. Successful bets are paid as follows:

However, there are also four side bets to enjoy, all of which pay 1 to 1:

The outcome of the main Home or Away game has no bearing on these side bets.

The Football Card Showdown interface is quite simple. During betting time, a selection of virtual chips appears in the middle of the screen. You can use these to place your wagers on the grid directly below.

The left side of the betting grid is coloured yellow and is for the Home team and associated side bets. The right half of the grid is blue and has identical betting opportunities for the Away team.

To the left of the Football Card Showdown betting layout you’ll see a 3×7 grid displaying mostly yellow and blue boxes. This displays the last 21 game outcomes and you may find it useful to inform your choice of bets.

Above this result history, a digital scorecard is displayed which simply reiterates what is happening with the physical cards. A second physical scoreboard can be seen to the right which is part of the Football Card Showdown studio design. This keeps track of the overall results for the entire day’s play.

If you’ve still not quite grasped the rules of this live dealer game, the next section should help you out. In it, we’ll run through a hypothetical hand to cement the Football Card Showdown gameplay mechanics in your mind.

Where to Play Football Card Showdown

Now that you’re up to speed with the rules of Football Card Showdown, you’re probably wondering where you can try it out. Well, right here on this page is a compilation of top online casinos that offer this Playtech live dealer game.

These properly regulated casinos have all been checked by our team of industry experts. We make sure they’re properly licensed, with secure payment options and fair promotional terms and conditions. So you can rest assured that each one offers a first-class casino gaming experience.

How to Win at Football Card Showdown

Like the majority of casino table games, it is not possible to play Football Card Showdown in a way that guarantees long-term success.

Although there is a shoe of eight decks, like in many blackjack games, it is not really effective to count cards. The dealers place the cut card into the shoe in such a way that the cards are shuffled very frequently. Combined with the burning of so many cards initially, this makes counting a fairly pointless exercise.

Since all of the betting opportunities in Football Card Showdown are simple 50-50 calls, there isn’t really a viable playing strategy. You can try to follow trends in the betting history if you like. But ultimately, every bet is a coin flip. So the best approach is to play small stakes and enjoy the game for its entertainment value.

Football Card Showdown is an average addition to the world of football-themed live casino games. In truth, it’s not really any different to the Live Football Studio product created by Evolution. Given that the payout percentages are a little lower on the Draw and side bets, you could even say it’s an inferior game.

The game was released just in time for the FIFA World Cup in 2022. It does feel like a weak and somewhat hurried attempt to capitalise on that. Perhaps Playtech will look to improve the game in future. Only time will tell.

Football Card Showdown is a live casino game by Playtech, designed in response to a similar product created by Evolution.

What is the Football Card Showdown RTP?

The advertised RTP for Football Card Showdown is 96.27%. That value actually applies to the main game of Home or Away. Side bets have a lower payout rate of 92.31%, while betting on the Draw offers a miserly RTP of 82.17%.

How do you play Football Card Showdown?

The complete Football Card Showdown rules can be found by scrolling a little further up the page. But in short, this Evolution live casino game is super simple. The dealer draws two cards and you just need to decide which will be the highest.

Is there a winning strategy for Football Card Showdown?