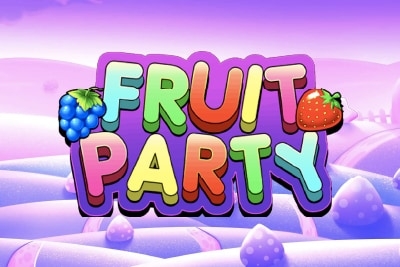 The Fruit Party video slot uses cluster wins with lots of multipliers to bring players a high level of action. Pragmatic Play has put their own spin on this style of game with plenty of extra ways to win on top of a very valuable free spins bonus round.

An Introduction to Fruit Party

In the video slot world, there is an entire sub-genre of games based around using clusters to determine wins instead of paylines. While Pragmatic Play’s Fruit Party online slot falls into this sub-genre, they’ve done a lot to make sure that this game stands out from other similar titles.

The game mechanics are what really make this title stand out with lots of extra multiplier opportunities.

We don’t see this kind of play in cluster-based games that much, but it is often available with payline-based slots. The idea is that you get randomly increasing wins instead of what’s listed on the pay table, but we’ll get more into that down below.

Visually, it’s up there with other games, and it does have a bit of a fruit throwback theme. Players aren’t going to be running after this title for its pure visual appeal, but it gets the job done and looks plenty better than some other games that we see being released by certain providers.

The layout of this game is really at the core of the gameplay experience, which is the case with most slots with any type of cluster-based format. Here’s what to expect:

Most cluster-based games have a pretty low volatility. This title is the exception in that its volatility is actually in the medium-high range. We’ll get into why that is with the feature set down below.

The gameplay for the Fruit Party video slot is a bit different than other slots with a cluster approach. Here we’ll break down each feature and how it affects the volatility and overall player experience.

First up is the tumble feature. The way this feature works is that all winning symbols from clusters are paid normally before they explode to allow new symbols to fall down into place.

When you combine this with the cluster-based approach, it’s actually easier to get several wins in a row off the back of a single paid spin than it is for payline-based games. While this is a fun feature, it also adds to the volatility since it makes winning spins more heavily valued in the general sense instead of spreading the pays out across a higher frequency of spins.

That doesn’t keep it from adding value and action. It’s just something to be aware of in terms of how it affects the game as a whole.

In every single win, you get a chance at the random multiplier feature. During the regular game mode, each symbol in winning combinations will have a random chance to become a 2x multiplier. Each multiplier within a winning cluster will double the payout for that cluster.

More than one multiplier will double it further from 2x to 4x, 8x, 16x and so on. A maximum multiplier of 256x, which is massive in any game, is available along these lines. This stands out as being another way to get paid, and it’s even more important because of how it compounds with the tumble feature.

The golden plum is the scatter symbol in this slot. It’s a bonus symbol, and it counts no matter which of the seven columns it shows up on even if they aren’t connected as a cluster.

When you get at least three on the game board, which isn’t that hard considering it’s a 49-spot play area, you start with 10 free spins no matter how many you use to trigger the feature. However, if you do it again during the bonus mode, you get additional free spins along the following lines:

It’s also worth noting that the multipliers can randomly be set to 2x or 4x (instead of just 2x), and special reels are used that are different than the regular game mode, so you get more value per spin on average anyway.

On the right-hand side of the game board, you have an option to buy directly into the free spins feature. The cost for doing this is 100 times your total bet size. You’ll be given 10 free spins with the ability to add on more with scatters along the above lines.

While this is a cool option, we generally don’t recommend it because it’s not a good value for the price.

How to Win at Fruit Party

There are two things to consider when you try to max out your value in the Fruit Party online slot. The first is simply that you should not go with the option to buy the free spins since it’s a bad bet overall. That’s really straightforward and simple to understand.

However, the other thing to consider is that the volatility is pretty steep up in the medium-high range. As a result, your streaks can be pretty severe. One way to smooth this out is to play faster than usual (including with the autoplay feature if you so desire) while simultaneously using a smaller bet size than what you would typically use. This gets in more bets at a smaller size during a session of the same length, so you end up wagering about the same amount total, but the swings are less serious this way.

Clusters of at least five symbols are needed for a payout. All clusters of 15 or more all get the same prize as well. With the strawberry and orange, you get 150x or 100x, respectively, for 15+ of each. The green apples get you 90x, and the bunch of grapes is worth 80x.

Things start to drop off a bit with the plum symbol and its 60x win, and you can earn 40x or 20x for 15+ of the star or heart symbols.

Cluster-based games have gotten a lot of attention in the modern era for giving players a breath of fresh air from a gameplay perspective. The Fruit Party video slot by Pragmatic Play goes a step further and gives players something that’s even different compared to other titles in the sub-genre.

The action in this game is intense, and it may have the highest volatility of any of the popular cluster-based payout games out there, which means its definitely worth checking out for players who like to try to go big or go home.