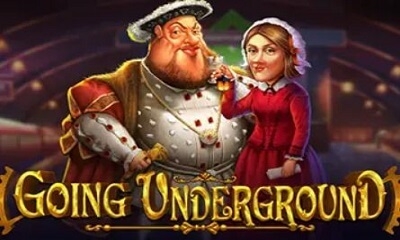 Going Underground is a Pragmatic Play online slot that pays tribute to the London Underground. It has a historical vibe and features some key figures from Britain’s past. Our Going Underground slot review reveals all the details of this uniquely themed slot. So take your seat and mind the gap as we go on a journey beneath the streets of the big city!

An Introduction to Going Underground

The setting is a typical London Underground station. There are Tube trains on either side of the grid, along with passengers waiting on the platform. The reels are dark brown and are set within a metallic grid. Each free spins changes the setting to a different Tube station.

Famous faces from British history join you for a thrilling ride on the Tube. Discover lots of exciting features when you play Going Underground.

Like most video slots, the Going Underground grid has three rows and five reels. The regular symbols include four royals (A, K, Q and J), along with five historical figures. These are Isaac Newton, Florence Nightingale, William Shakespeare, Winston Churchill and Henry VIII. The special symbols are a newspaper wild and a Tube train scatter symbol.

The Going Underground RTP is 96.51%, which is higher than average compared with other online slots. You’re able to bet with as little as 0.20 credits and as many as 125. Should you get lucky, you can win up to 5,000x your bet. Payouts can be large but infrequent because the Going Underground volatility is quite high.

The slot is a prime example of how immersive online casino software can be. It has an upbeat, energetic soundtrack and its visuals are both eye-catching and well designed.

On any spin, one of five random modifier features can trigger.

Whenever this bonus feature launches, you’ll get to play one of five rounds of free spins. To activate the bonus game, you need to find three scatters or rely on the randomly triggered Bonus Blitz modifier.

There are five different rounds, randomly selected by the game:

End Of The Line

Next there’s the End of the Line round, which is the game’s most rewarding bonus feature. This offers you three respins and starts with an empty grid. Five different symbols can appear and the Hold & Win mechanic is used. These are as follows:

When you receive a bonus round, you can choose to accept it or gamble. If you gamble, you’ll either win from 4x to 20x your bet or get to play the next most valuable feature. Pentonville is the least valuable and End of the Line the most.

The Tube train is the scatter. Land three anywhere to play one of five bonus rounds. Four of them give free spins and the other is a respins feature. The one you get is determined at random.

The newspaper is the wild symbol. It substitutes for all regular paying symbols and also pays for three or more on a payline. The wild has the same top payouts as Henry VII, so it can be very valuable.

As we mentioned earlier in our Going Underground review, there are four free spins rounds. To play one of these, land at least three scatters or trigger the random Bonus Blitz feature.

The slot decides which round you play at random. Bear in mind, you could end up with the respin feature instead of free spins.

How to Win at Going Underground

Line up three or more matching symbols from left to right on a payline to win. There are 20 paylines in total. The more valuable the symbol, and the more of them there are, the more lucrative the win. You may earn bigger wins if you’re lucky enough to play a random feature or bonus round.

Play Going Underground free if you want to try the slot without having to risk your money. The slot’s demo is available at lots of reputable online casinos. Try the Going Underground demo out and gain some first-hand experience of playing this interesting new slot.

If you want to play for free with a chance of winning real money, take advantage of casino promotions. Join one of our highly rated, fully regulated casinos and claim a bonus on your first deposit. Use this to play Going Underground. Even though you’re not spending your own money, all winnings are real and are added to your balance.

As with most slots, the playing card icons award the lowest wins. The five historical characters offer the higher payouts. The notorious Henry VIII, best known for his six wives, is fittingly the top-paying symbol. Fill a payline with the womanising king to win 25x your bet.

Going Underground offers a fresh take on the London theme. It combines the city’s widely used subway network with a host of famous faces from throughout British history. Along with a unique theme, the slot has more than its fair share of special features. If you like slots with varied, unpredictable gameplay, you’re sure to enjoy playing this one.

Claim a bonus from one of our recommended real money casinos and play the Tube-themed Going Underground slot today.

Does Going Underground have a free spins feature?

There are four different free spins rounds, each one with a different bonus. These include respins, extra wilds, stacked wilds that nudge and extra cash prizes.

What is the Going Underground volatility?

Going Underground is a highly volatile online slot. It’s possible to win big, but the large payouts only come round once in a while.

What is the max win ofGoing Underground?

The maximum win amount is 5,000x your bet. Fill all paylines with Henry VIII symbols to earn this top payout.

Can I play Going Underground for free?

Yes you can. Try the Going Underground demo risk-free. Alternatively, use a casino bonus and play for free with a chance of winning real money.

Pragmatic Play created Going Underground. This slot is a prime example of the developer’s creative vision and ambition.

Can I play Going Underground on my mobile or tablet?

Yes, you can. Going Underground is compatible with all the major mobile operating systems. It’s playable on both smartphones and tablets.

Which online casinos have Going Underground?

What is the Return to Player (RTP) for Going Underground?