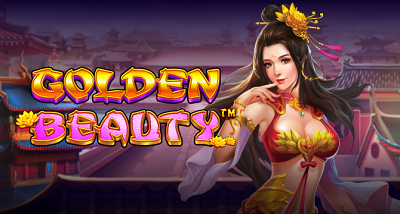 The Golden Beauty video slot by Pragmatic Play has a great look to it based around a beautiful princess who makes her appearance on the reels as a stacked symbol. The gameplay for this title centers around every tenth spin giving players opportunities for lots of extra wilds on the reels for big payout chances.

An Introduction to Golden Beauty

With any slot, you need a few things for it to be successful. You need a solid theme, a great look, fun features and a style of play that fits the overall concept.

The visual appeal of this game cannot be denied. There’s a beautiful city scene in the background with lanterns swaying in the wind. On the reels, you’ll have colorful, gorgeous symbols that include everything down to the lower-tier card ranks.

In terms of gameplay, you’ll have a good mix of regular pay table wins thanks to the high number of paylines along with some super strong features that hit very often thanks to the structure of the slot. It’s set up to give you something to look forward to every ten spins as well, which is a style of play that we haven’t seen as often as we should.

The betting setup for this game can be a little tricky to get used to at first because it’s centered around having a lot of small and medium wins instead of the occasional larger payout. Here’s what to expect:

There are two things to note here. First, we’re going to describe all of the wins in this game as multiples of how much is being wagered per payline, and you can find that by dividing your bet size by 75.

Second, the volatility of this game is in the medium range, which means that you won’t have swings that are too bad in general. However, it effectively plays like a slot with a lower level of volatility since you’ll be playing with sets of 10 spins at a time, and this smooths things out even more because of how the features work, which you’ll see below.

The feature-centric gameplay style of the Golden Beauty online slot is something that most players will be able to get behind with no problem. However, you will need to get used to playing ten spins at a time in clusters before making other decisions like whether to change your bet size or end your session.

In this game, you’ll see a counter in the upper right corner that lists how many spins you’ve had in the current progression. There golden lotus symbol, when appearing normally, will put a golden box around any spot it lands on in those ten spins.

Once you get to the tenth spin, all of those marked spots will turn wild and give you more opportunities to get big payouts.

This feature obviously works hand-in-hand with the wild payouts, which we’ll look at below, but it’s important to understand that this is the one feature that dictates how you play this game for the most part.

The Golden Beauty video slot centers around the princess, which is the highest-paying symbol in the game. She has the same payouts as the gold and purple wild, which are as follows:

There is a bonus symbol that can appear on each of the five reels, and if you pick up at least three of them, then you will be given a set of free spins. The more scattered bonus symbols you get, the more free spins you earn.

You will have three tiers of free spins that you can take advantage of. The lower number will have 10 wilds on the screen, the middle number will have seven wilds, and the lowest will have five wilds. These wilds will be in random positions on every one of your free spins.

What’s great is that you can also re-trigger this feature by getting three or more scatters at the same time during the free spins mode. When this happens, you’ll be given an additional bonus round that will start at the end of your current one. The number of scatters in that re-trigger determine which set of free spins you have to choose from, etc., just as if you had triggered it during the regular game mode.

How to Win at Golden Beauty

To keep your payout rate as high as possible, you want to avoid changing your bet sizes or leaving your session when you aren’t immediately after your tenth spin in a set. Doing so will cause the counter to reset, which in turn means that you will get less value because you will have paid in spins that did not get paid off with the extra wilds on the progressive spins feature.

The princess is the highest-paying symbol with prizes that are the same as the wilds, and they’re the only symbols that pay for two of a kind or more on the game board.

From there, you drop down to mid-range wins. The pot of gold and the hair brush will get you 90x for five of each. The ruby broach is worth 75x for five, which is the same as the hair clip. The instrument is worth 60x for five, and that’s the same prize that you’ll earn for five of a kind combinations of the lotus symbol.

Finally, you have the card rank symbols that all pay 24x. This includes the A through 10 symbols in all different colors.

Pragmatic Play has a habit of making really solid games through what would otherwise be seen as somewhat generic or plain themes. The Golden Beauty online slot is a great example of how this works and how they put a lot into the presentation and gameplay of a title to make it really stand out.

A lot of the competition can’t do this, and that’s what makes them stand out as a company as well. In any event, the 10-spin mini-sessions used in this game give it a different kind of experience that we think most players will enjoy a lot.