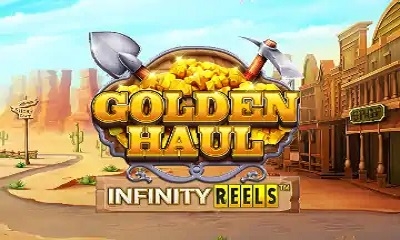 The Golden Haul Infinity Reels video slot from Yggdrasil Gaming is special for several reasons. Its gameplay is dictated by an exciting and atypical format where all symbols are scatters. Additionally, you’ll find no limit to the number of reels you can have in this game.

We really get excited when video slot developers come up with something fresh. This has been the case for a while with atypical formatting styles. We’re seen this from a number of different companies. However, the key is to offer something that’s different but that’s not too far outside of the box.

The idea here is that all symbols are scatters, but an additional mechanic is in play. This mechanic allows for extra reels to be added with no limit involved. As a result, you can end up with some pretty massive wins. On top of all of this, other features add to the fun.

Aside from the gameplay, the look and feel of this title is solid. The theme is an old mining town in a Wild West type of situation. Along with that, you’ll have playing cards, mining picks and saloon doors as symbols. The background is a mining site in the desert, and it comes together perfectly with the theme of the title.

As we mentioned up above, the layout is pretty different here. You’ll want to really pay attention to how this works before you get started playing. That’s because it’s not particularly easy to pick up on what’s going on just from watching some spins unfold. However, it’ll only take you a few moments to understand from the following explanation.

The volatility of this game is in the medium-low range. That’s because the hit-rate is pretty high. Additionally, the way the payouts are determined keeps the volatility down below average.

The gameplay of the Golden Haul Infinity Reels online slot centers primarily around the regular pay table. We’ll break down more of how wins are put together and what the features look like in the following. This will help you to understand exactly what’s happening. Additionally, it’ll help to prevent situations where you don’t understand how payouts were determined.

How Wins Are Calculated

Aside from the saloon doors scatter, which we’ll look at separately below, wins are calculated as follows. This is an atypical system, so you’ll need to keep in mind that it’s not about paylines/ways to win.

What you’re aiming for is to get consecutive reels from left to right that have matching symbols. The positions of those symbols on the reels is irrelevant. Instead, you just need them to show up somewhere. From there, you count the total number of symbols found on those reels. Additionally, you need at least five matching symbols for a win. Your base win is determined by how many symbols are in the combination multiplied by the value for the symbol on the pay table.

However, you get a bonus for more reels being added. For each reel added, the multiplier for that winning combination is increased by one. For example, the bag of gold has a symbol value of 4 coins. If you had a winning combination that consisted of eight total symbols, and two extra reels were added (bringing the multiplier to 3x for the spin), then your win would be 4 coins x 8 symbols x 3 multiplier for an overall prize of 96 coins.

The saloon doors in the Golden Haul Infinity Reels video slot is an atypical symbol. It works as a true scatter instead of a left to right scatter. As a result, it gives payouts no matter where it lands. With that said, if it’s the only winning combination on the reels, it still has to have at least one symbol land on the far-right reel to add more reels.

The symbol value for the saloon doors scatter is tied with the best in the game at 5 coins.

Two different kinds of wild symbols are found in this game. One of them shows up normally, and the other is a part of the Infinity Streak feature. If you get a regular wild that looks like a box or crate, that will substitute for anything but the scatters.

However, from the third reel and beyond, you can also pick up a mine cart wild. This is known as an Infinity Wild, and it triggers the Infinity Streak feature. When you get this one, it adds a wild to many different reels as it rides off like a mine cart does. This is clearly a very valuable feature that adds a lot of extra wins to your total.

No matter how many symbols you use to trigger the free spins, you always get 15 free turns. Note also that the free spins mode cannot be re-triggered.

How to Win at Golden Haul Infinity Reels

Our first piece of advice is to make sure that you understand how the payouts are determined. Lacking this understanding will really hurt how much you can enjoy this game for most players.

Aside from that, we recommend being slightly more aggressive with your bet sizing that you might normally be. The reason for this is that the volatility is below-average. Additionally, this means that your swings will be smaller on average than usual. Increasing your bet size slightly (not a lot) takes advantage of this with bigger wins. However, your volatility will still stay pretty low with respect to how much you’re betting.

The gold miner symbol is worth 5 coins, and it drops to 4 coins for the bag of gold. You can earn 3 coin wins for the TNT or pickaxe/shovel symbols. Things drop further to 2 coins for the lantern and bottle of drink.

Card rank symbols on playing cards make up the lower four symbols. The heart is worth 2 coins, but all three of the others are worth 1 coin each.

The overall concept put into play as the centerpiece for the Golden Haul Infinity Reels online slot is a strong launch pad for the gameplay and excitement. We also want to point out that the excitement is absolutely raised up by the awesome degree to which the visual appeal completely fits the overall driving concept.

As a portion of this software developer’s portfolio as a whole, this is a slot that holds a key position since it has appeal to a whole lot of players, and the feature-based gameplay style of this game is targeted toward offering you a tremendous degree of action. Also, a serious number of bonus features can be found in this game, which is a fact you can’t say for plenty of the competition.

What is the Return to Player (RTP) for Golden Haul Infinity Reels?