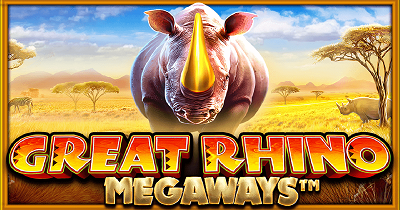 With the Great Rhino Megaways online slot by Pragmatic Play, you can have up more than 200,000 ways to win on each individual spin. On top of that, there’s an avalanche feature for more payouts and a free spins bonus round that you can activate whenever you want for a fixed prize.

An Introduction to Great Rhino Megaways

Slot formats are what set the stage and the tone for the entire gameplay experience. With the Great Rhino Megaways video slot, you get a layout that brings you thousands of ways to get paid on every single spin and opportunities for tons of small and large prizes alike.

From a gameplay perspective, this title is up there with the most exciting games in the industry as a whole.

Aside from that, this game looks excellent as well with its African safari theme. You’ll see several different types of animals both in the background and on the reels, and that’s furthered by other visuals and a soundtrack that all combine to really bring it all together.

The feature set of this game offers some pretty exciting gameplay as well, so everything is pretty much set up to give you a cohesive overall experience.

The layout of this slot is obviously a key part of the gameplay. Here we’ll break down what you can expect:

The volatility of this game is pretty low, and the huge hit-rate that comes along with the Megaways format has a lot to do with that. However, the features also add to it as well by increasing your hit-rate and chances of winning in general, so that’s something else to consider when picking out a bet size that will work the best for you.

This game is set up to be a lot of fun with a whole lot of small and medium wins coming at a regular basis. While the format is a part of that, the features we’re going to look at here are a part of it as well.

When you get a winning combination of any size, it will be paid out normally first. From there, the winning symbols will all disappear, and that will cause existing symbols to fall down into the empty spaces. After that, new symbols will fall in from above until the grid is completely filled, and then you’ll have new chances to win.

This process will continue over and over until there are no new winning combinations available. The avalanche feature costs the player nothing and is really just extra chances to pick up wins.

The name of this game is the Great Rhino Megaways online slot, and you’d expect a rhino to make an appearance. He does, and it comes in the form of a wild symbol.

This wild shows up on the second, third, fourth and fifth reels only.

On the left side of the reels, you will see two controls that are worth mentioning. One allows you to purchase a shot at the free spins bonus round, and that will cost you 100 times your total bet size. It’s up to you to determine if this is worth the cost, but we don’t believe it is.

Additionally, there is an option to double the chances of hitting the free spins feature normally. It will cost 25 percent of your current bet size, and we think that option is worth it in terms of maximizing your RTP percentage.

The golden rhino coin is a scattered bonus symbol, and it helps you to get free spins modes when you pick up at least four on the game board no matter the position or reel.

Tumbles increase your win multiplier by a factor of one for that spin during the free spins bonus, so on your third tumble, for example, your multiplier for wins will be 4x.

You will be able to pick from three different numbers of free spins depending on how many scatters you used to activate the feature, and those will correspond to multipliers of 1x, 5x and 10x. In all cases, starting with a 10x multiplier is the best option in terms of maximizing your RTP.

You can retrigger the feature by getting three or more scatters, which will add five free spins to your total.

How to Win at Great Rhino Megaways

If you follow these two recommendations, then you will maximize your RTP percentage and get the best payout rate possible.

From there, you can adjust your bet size a bit because the hit-rate is so high and the volatility is so low. Increasing it by about 50 percent compared to what you would normally be comfortable with is a good option, but make sure to account for the extra 25 percent added on for the increased chance to hit the free spins.

The cheetah pays out 50x for six of a kind. Note that it will give you wins for two of a kind or more, and all of the rest of the symbols in the game require at least three. Also know that all payouts in this game are based on a multiple of your overall bet size.

The gorilla and crocodile symbols pay 5x and 2.5x for six of a kind, respectively. You can also earn 2x or 1.5x for six of the hyena or flamingo symbols.

We really like what Pragmatic Play did with the Great Rhino Megaways video slot. The action is very serious with a structure and feature set that drive the hit-rate up in a serious way. On top of all of that, you have the free spins mode with some pretty incredible multipliers that combine with the avalanche feature for opportunities to pick up major jackpot-sized prizes.

There’s no denying that the vast majority of players will really enjoy the gameplay of this title despite the somewhat generic African safari theme.