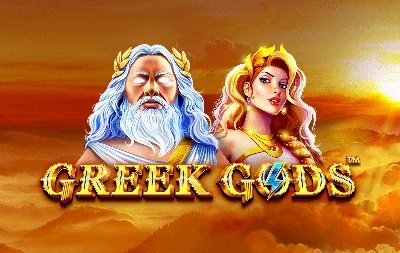 Pragmatic Play’s Greek Gods video slot uses a theme with Zeus and Hera shown across the reels up on Mount Olympus. The title centers around random awards at the top of the reels that are triggered in a special way, but you can also get free spins and other bonus features as well to help you to run up some serious payouts.

An Introduction to Greek Gods

There’s no shortage of online slots in the industry that are based on themes from the Olympians of Greek mythology. The Greek Gods online slot is another entry into that sub-genre, and Pragmatic Play has made sure to really bring something special with so much competition for this type of theme to be available.

In this game, you’ll see a fresh and atypical way of awarding bonus features combined with more traditional opportunities for a newer style of gameplay that most people will have never seen before.

Visually, it’s a very striking game. Zeus and Hera are available on the reels, the latter of which is pretty important since the queen of the Olympians doesn’t tend to show up very much on slots with Greek mythology themes. You’ll see the golden rays of the sun shining down on the temple atop Mount Olympus in the background, housing the reels, as well.

Action is the name of the game for this title, and it centers around a higher hit-rate style of play than what most titles have available. Here’s what you can expect for the layout and format:

It’s clear that there are a ton of betting increments available for players at different levels, and that’s the kind of thing that will give you a lot of room to pick out wager sizes that work well for what you’re looking for.

The feature set for this title is a little atypical. Along these lines, with the Greek Gods video slot, it’s pretty important to learn how the features work before you really get started playing because they are so different. Otherwise, you may end up a bit confused as to what’s going on with some of it.

The wild symbols are great news in virtually any game, and this one is no exception. They appear on all five reels, and with the “all ways” format approach, they’re even more valuable because they can contribute to so many more winning combinations.

You can get the following payouts for combinations of just wilds:

Note that these wins are multiples of the total bet size, as are all wins listed for the Greek Gods online slot. Additionally, wilds can substitute for any symbol in the entire game except for the scatters.

If you look up above the reels, you’ll see another set of narrow spots for symbols, and this is where the random awards will appear. You’ll have a chance to win a random award on the last three reels in the The regular game, and this increases to all three reels for the free spins mode.

If you fill a reel with three of the same symbol, then you will win the random award noted at the top of that reel, if applicable.

There are three types of awards you can get. First, you can get a money prize, which is a multiple of your total wager. This can be as much as 50x, but that’s not all.

The bonus option will take you to the Wheel of Fortune bonus, which we’ll look at below. Additionally, the free spins option will get you into a set of free spins.

The blue lighting bolt on a golden background is the scatter, and it appears on the third, fourth and fifth reels only. It can appear stacked, which is pretty important, and it doesn’t give payouts; it only gives access to free spins.

You can re-trigger to add more spins up to a maximum of 40 total in one go. A total of 25 can be from random awards at a time, and up to 15 can be from scatters for consecutive free spins.

How to Win at Greek Gods

The Greek Gods slot offers players opportunities to really fine-tune their bet sizes. That’s something you don’t always get, so it’s important to use it when you have the opportunity to do so.

In this case, the volatility is more on the lower side with such a high hit-rate that you can increase your bet size a little with little to no ill effects because the swings are so tolerable with the low variance. This is a strategy that you’ll want to pay attention to and fit to your overall bankroll management approach since it is still possible to hit some big winning spins in a row.

The payouts for the Greek Gods video slot are based on multiples of the total bet size. Because you have so many opportunities to get multiple wins on the same spin, these can seem a bit smaller than they really are in terms of how much and how often you can get paid.

The Zeus symbol pays 6x for five, and it drops down to 5x for five of Hera. The harp and trophy each pay out 4x and 3x, respectively, for five of a kind combinations.

From there, things drop down to the card rank symbols. The red A, yellow K, purple Q, blue J and green 10 all give you the same win of 2x for five.

We think many players will enjoy what the Greek Gods online slot brings to the table because of how Pragmatic Play interlaced new feature ideas with old, proven options. The gameplay is fast-paced thanks to the way the 243 ways format combines with the atypical approach to features as well.

From a visual standpoint, it’s not the strongest game out there, but it doesn’t try to be. Instead, it’s decidedly well above-average in terms of the background and overall atmosphere (with the music included), and the symbol set is pretty decent as well outside of the fact that more than half of the regular symbols are card ranks.

Overall, it’s not a bad title at all. It will definitely sit better with players who prefer low volatility slots, but it’s got something that just about everyone could enjoy.