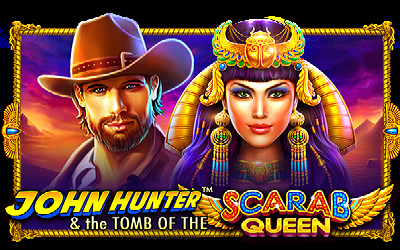 Based on an adventure and exploration theme, the John Hunter and the Tomb of the Scarab Queen online slot gives players an opportunity to go hunting in an Egyptian tomb for lots of winning possibilities. With an innovative money collect feature, free spins and other ways to win, this is definitely a game for players who like a lot of action.

Top John Hunter and the Tomb of the Scarab Queen Casinos

Books, movies, video games and television shows about exploring ancient Egyptian tombs are always popular, and Pragmatic Play put their own spin on the concept with the John Hunter and the Tomb of the Scarab Queen video slot.

Scarabs are very important in this game and are a key part of the theme instead of just being a decorative piece like what you find in most other Egyptian-themed slots.

On the graphical side, the background is a sunset across the desert with pyramids and other objects around. The symbol set looks great without resorting to any kind of gaudy 3-D graphics, and even the card rank symbols are stylized and colorized in a way that fits the theme and overall aesthetic very well.

In terms of gameplay, this is a video slot that is all about features that give you a whole lot of value.

The layout is set up in a way here to make things really straightforward, and it’s easy to understand the betting setup as well. Here’s what you get:

This game’s format is pretty standard without any surprises, and the betting is really easy to understand since the controls have you actually changing your total bet sizes instead of the coin sizes.

Along these lines, all of the payouts that we’re going to mention in what follows are multiplied by the total wager instead of the bet per payline.

The features in this game drive a majority of the value, so it’s important to know what they are and how they work. This is especially true for the collect feature since it’s not very common and isn’t seen in very many video slots at all.

Cleopatra is the wild symbol, and she appears framed in gold with a green background. This symbol will substitute for any of the regular symbols in the game but not for the collect, money symbols or scatters.

Note also that since this symbol only appears on the second, third, fourth and fifth reels, you cannot get winning combinations that consist only of wilds.

Despite the lack of its own set of pays, this is a value-oriented symbol that definitely helps you out with getting additional wins on top of what you would have otherwise won.

The pyramid symbol appears in front of the sun with a golden frame and a red background. It’s the scatter, and it makes appearances on the second, third and fourth reels only.

The payout for this symbol is 1x your total bet size if you get all three on the reels at once.

This is also a bonus symbol, and we’ll get into how that works further down below.

If you get three scatters on the reels at once, then you’re given a set of eight free spins. During this feature, every one of the money symbols that show up get accumulated and added to a growing pot. Once the free spins are over, you’ll have the value of the pot added to a huge money symbol that shows up on the first four reels, and you’ll be given a re-spin at the end.

If you get the collect symbol on the fifth reel during this re-spin, then you are given the value of the total pot as a bonus win.

Note also that you can re-trigger this feature to add eight more free spins to your total by getting all three of the pyramids on the reels during this bonus feature. There is no limit to the total number of free turns that you can get in one activation of the feature along these lines.

This is a feature that is pretty atypical, and it’s fairly involved, so you’ll really want to pay attention to the rules for it and how it works if you want to be able to follow along with the action while it unfolds.

There are six possible symbols involved in this feature, and they appear during the regular game mode and the free spins:

As you can see, this is a feature that brings a lot of value but that is also a bit complicated.

The volatility of this game is fairly high, and the hit-rate is moderate, so one strategy you can use is to drop your bet size by about a third or so and set the game to use turbo spins to get in more spins in your session.

The end result will be that you wager the same total amount, more or less, during your play sessions. However, you’ll smooth out the volatility a bit and give yourself better chances to hit the money collect feature and free spins mode, which are where the majority of the value in this game is held.

This is a John Hunter online slot, so it makes sense that he would be the top-paying win. Five of a kind of this adventurer on the same payline gets you a win worth 32x. Note that this is multiplied by your entire bet size, and if it was listed as a line bet win, it would be 800x instead.

From there, there is the purple jackal that gets you 7x for five, and five of the pistol in the holster is worth 6x. The leather bag will pay you 5x for five on a line as well.

At the bottom end of the pay table, players have the purple A, yellow K, pink Q and blue J symbols. They are all stylized to fit the theme of the game really well, and they all pay 4x for five of a kind combinations.

Pragmatic Play did an excellent job with the John Hunter and the Tomb of the Scarab Queen video slot. They integrated a pretty atypical feature into the core of the gameplay absolutely perfectly, and it can give you some really big jackpot-like prizes if you hit the right collect symbol at the right time.

Overall, it’s clear that they made this game about big wins through the features, and that’s a style of play that appeals to most players.