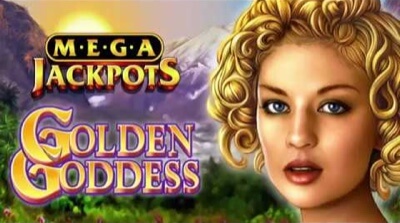 The Golden Goddess video slot is powered by International Game Technology as a part of their MegaJackpots line. The theme of this game centers around Athena from Greek mythology, and it’s packed with free spins, super stacked symbols and multiple ways to win the big progressive jackpot. Compare casinos with the Golden Goddess slot using the top list below and also get a bonus to play with.

International Game Technology is known for their MegaJackpots line of games that give players opportunities to take down some pretty huge payouts on a single turn of the reels. Their Golden Goddess video slot is a part of that line, and it stands out among Greek mythology-inspired slots because of the plethora of ways in which you can win a ton of money.

When you look at this title, you have to remember that it’s been around for quite some time, and that means that you would expect for the graphics to be incredibly dated. However, that’s not really the case here. It’s largely because IGT makes games from the perspective that they will be popular for a long period of time, and as a result, they crafted their graphics in a way that would age particularly well.

The timeless graphics found in this game portray the goddess Athena as well as other important figures from the Greek mythology.

In terms of gameplay, the style of play that you’ll find here is obviously with a high volatility since it has a big progressive, but the other features and the general structure of the pay table provide a lot of action as well. Something that’s easy to overlook by mistake is the fact that there are multiple symbols that pay out for just two of a kind in combinations, which increases the hit-rate and helps to lower the overall effects of the swings.

The MegaJackpots Golden Goddess online slot is designed from the ground up to give you a ton of action. Here is a quick summary of everything you might want to know:

Make sure that you do not confuse the line bet size (left-hand box) with the total wager (right-hand box) since they are right beside of each other on the display under the reels.

As is the case with all of the games in the MegaJackpots line by IGT, the Golden Goddess progressive slot offers a style of play that is primarily feature-driven. You find very quickly that this would be an exciting game even if it was not centered around a big jackpot, and that’s the best that you can hope for as a player.

The Golden Goddess slot symbol in purple and gold is the wild. It shows up on every reel to make it easier to get winning payouts, which is exactly what players like to see since that helps a bit with the swings while you’re shooting for the big progressive jackpot. You can also get payouts with combinations of this wild on the given paylines:

Along with this, the MegaJackpots symbol that helps to activate the progressive (see below) also acts as a wild symbol for the purposes of creating these winning combinations, but its primary focus is to trigger the progressive.

We want to point out also that these wild symbols can appear stacked, and if you get a stack of the Golden Goddess wild symbol that fills a reel, it has a chance of converting over into the MegaJackpots symbols to increase your chances of winning the progressive jackpot. Aside from that, the Golden Goddess wild does not count as the MegaJackpots symbol for the purposes of activating the jackpot, and it does not count for the rose scatter.

The rose symbol shows up on a golden background, which fits the theme and title of the game pretty well. These roses show up on the middle three reels, and they are always stacked at least three high. While they don’t help you to get extra wins, they do activate the free spins mode if you get nine of them on the reels at the same time.

Once this feature is activated, you’ll pick one of the nine roses to reveal a super stacked symbol during the feature that has a chance to turn into the MegaJackpots wild symbol.

This is a value-packed free spins mode that does not take what some consider to be the “lazy way out” by giving a standard multiplier. Instead, you get value in other ways by tapping into the stacked symbols feature and putting more high-ranking symbols on the game board.

One symbol is chosen each spin to be the super stacked symbol. It will show up in huge stacks on the reels, which gives them a good chance of landing on the same reel with lots of intersections across paylines. This increases the chances of multi-line wins for the chosen symbol on each spin, and that’s the kind of thing that helps to add even more excitement to a game like this that’s already built around huge wins.

This game is tied into the MegaJackpots progressive jackpot setup, which is a network jackpot tied across several of International Game Technology’s online slots. You get two different ways to win this top payout in this game:

We’ve covered a number of different ways that things are made easier for players as far as filling the game board with the appropriate symbols. However, it’s also worth noting how the second option works in terms of your bet sizing.

Your overall chances of winning the progressive jackpot are directly proportional to the size of your wager, but players at all bet sizes have a non-zero chance of winning. For a simple example, wagering €0.80 per spin gives you twice the chance of taking down the top prize than betting €0.40 per spin. This keeps things fair for the progressive and gives players some strategic options that we’ll look at below.

How to Win at MegaJackpots Golden Goddess

You can change your chances of winning at the MegaJackpots Golden Goddess game by increasing your bet size or playing longer sessions. Most players don’t want to do both for obvious reasons, so we’ll break down a way that you can create a compromise between these two factors that works well for most players most of the time.

The basic idea behind this strategy is by playing longer sessions with a smaller bet size so that you minimize swings as much as possible.

You can’t win if you’re not in the game, and because of the high volatility of the MegaJackpots Golden Goddess video slot, you can have some pretty long stretches of not picking up any sizeable wins to keep you afloat. To counter this, we suggest a simple strategy that involves picking a smaller bet size than you would normally would and pairing that with longer sessions than you would normally play.

You’ll maintain a solid chance of winning the progressive jackpot because your overall odds of winning are basically proportional to how much you’re betting in total. More bets, even if they are smaller, will average out to be more or less the same amount wagered in total compared to if you had played normally, and that’s why this strategy works.

In short, you give up some time (ie: longer sessions) to have a lower level of volatility while maintaining the same chances of winning the progressive jackpot.

A few different symbols have two of a kind wins available in this game. That includes the wilds, Athena and the soldier on the blue background, who could be Odysseus, the most favored mortal by the Goddess of Strategic Warfare.

Note that all of these payouts, just like all of the other non-progressive wins for the MegaJackpots Golden Goddess slot, are listed as multiples of the overall bet size. You can multiply these numbers by 40 to get the equivalent line bet wager amount that is often used in other games.

In terms of the overall pay structure, it’s clear that it’s based largely around the features since most of the rest of the pay table is pretty flat. You can win 50x for five of Athena or 40x for five of Odysseus. The flying horse Pegasus also appears for a 30x win, and you can score 20x for five of the dove on the green background.

Five different card rank symbols run from 11x to 15x for five of a kind combinations on the back end of this slot. That includes the purple 10, the blue J, the yellow Q, the orange K and the red A symbols.

Before you get started playing this game, there are a few key points that we think players should know. First, we want to start with some of the highlights:

We also have a couple of things to warn players about as well:

These are some minor points compared to how much this game has to offer in general, but we wanted to bring attention to them anyway just to make sure that our readers are informed.

With the Golden Goddess progressive MegaJackpots slot by IGT, players get a mix of features with the chance of winning a huge amount of money always one spin away. Based on one of their land-based titles by the same name, this title has seen tremendous success in both the line and brick-and-mortar game cabinet versions, and it’s no wonder: Everything about this slot brings a lot of action and excitement.

For players who enjoy Greek-themed games, this is probably going to be one of the favorite titles you find anywhere. For players who like progressives in general, it’s likely to be up there on your list of favorites as well.