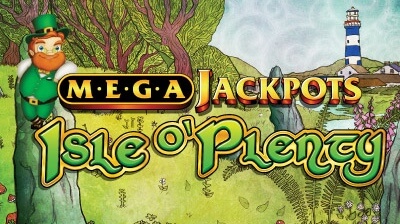 You’ll try to have the luck of the Irish with International Game Technology’s MegaJackpots Isle O’Plenty progressive slot. This game uses 40 paylines with a 5×4 grid of symbols and awards at least €500,000 for the progressive top prize. You can win free spins in this game, and the Wild Rush feature gives you good odds of getting columns full of wilds when just one of them appears on the reels. Compare online casinos  that have Isle O’Plenty using the top list below and play with a bonus.

It’s no secret that a lot of the online games produced by International Game Technology are simply ported from their land-based cabinets with additional functionality added for the virtual Internet environment, and that’s the case with the MegaJackpots Isle O’Plenty video slot.

It’s important to point this out for players who don’t know because it may appear that the graphics are a little dated, but they’re not bad at all considering the decades that this game has been around. On top of that, the gameplay is still comparable to what’s available from the newest games running today, particularly in the progressive slot space.

The theme here is Irish, and you’ll want the luck of the Irish when you shoot for the top prize that’s always worth a minimum of half a million euros.

The layout of this game is set up so that you get a lot of action from some of the features in a way that you wouldn’t if it had a more traditional format. Here’s what you need to know:

With all of this having been said, we want to point out that you can qualify for the progressive no matter the stakes of your game, so that’s not something to be too worried about if you prefer to enjoy lower stakes.

In online slots that have progressive jackpots, they’re always going to be the center of attention in one way or another. That’s surely the case with the Isle O’Plenty Mega Jackpots slot. However, there are other features in this game so that things aren’t so one-sided, and we’ll show you what you need to know about them below.

There are red and golden heart symbols that can make appearances on every single one of the five reels. These are the wild symbols. They award some significant static payouts along these lines:

Moreover, they help you to get lots of extra winning combinations, and they count for everything but the Mega Jackpots or bonus scatter symbols.

They are also tied to the Wild Rush feature. When you get a wild symbol anywhere on the reels, there’s a chance for it to expand downward, which will cover multiple spots with extra wilds. With four rows instead of just three, this increases the chances of getting several wild symbols on the game board all at the same time, which is the kind of thing that leads to serious multi-line winning chances.

There’s a lighthouse with rainbow lights shooting out of it, and it’s available as a bonus symbol. Two or more of these on the third reel gets you a free spins bonus round. They appear stacked, and if they cover the reels with four symbols, then you get 24 free spins. Three of a kind gets you 12 free spins, and just two is worth six free spins.

During the bonus feature, you can re-trigger with another bonus castle symbol that appears on the center reel only (just like in the base game). Two, three or four add six, 12 or 24, respectively, to your total number of free spins. However, you can only get up to 240 free spins total on each individual bonus round.

The Leprechaun Magic feature can trigger at random during the free spins. For this feature, the top row of symbols has a random chance of giving you wild symbols or Mega Jackpots symbols.

There are some things you should know about the progressive jackpot before we actually get into how to win it:

Players get two ways to activate the progressive jackpot. The first is by getting four of the Mega Jackpots symbols on the reels at the same time. This can happen during the free spins or the regular game.

Aside from that, players also have a random chance of winning this progressive on any given spin regardless of the symbols that appear on the game board. This chance is proportionate to your wager amount, however, so a bet of €0.60 will win the progressive one-tenth of the time of as a bet of €6.00.

How to Win at MegaJackpots Isle O’Plenty

Because your bet size doesn’t affect whether or not you can qualify for the Mega Jackpots progressive in this game, you don’t have to worry about meeting any particular threshold. That means that you have many betting options at your disposal when choosing an overall strategy.

If you lower your bet size but play for more spins, you will lower the volatility of your play, however, and that can be particularly useful for players with a smaller bankroll that maybe can’t stand up to serious swings. However, if you want a shorter session length, you can go with larger bet sizes instead as long as you’re willing to withstand the big swings that can come in a game with such a high base level of volatility.

While there are several symbols in this game, the payout structure can actually be described in fairly simple terms. The wild and leprechaun symbols are the top-paying ones of the bunch, and they pay 1,000x for five of a kind combinations. You can also win 200x for four and 80x for three on a payline.

Next up is a set of three different mid-level wins. They are the pot of gold, the tree on a blue background and a magical glowing book. Each of these have the same payouts as each other with 600x for five, 120x for four of a kind and 60x for three.

Under that are the lower levels of payouts. It starts with the golden swan, which can give you 150x, 50x or 20x for five, four or three of a kind, respectively. Moving on is the koi fish and the butterfly with respective wins at just under those values for 120x, 40x and 10x. Finally, there are the toadstool and flowers, and they pay 80x for five along with 20x for four and 5x for three of a kind on a line.

When we review games like IGT’s Isle O’Plenty progressive slot, we want to make sure that players know exactly what they’re getting themselves into because the whole point is to make it easier for you to make up your mind about which games will work the best for you. Along these lines, we want to present to you some pros and cons of this particular game.

We’ll start with the highlights:

With those things said, there are some things that some players may not always like:

Overall, these are pretty mild criticisms that most players probably won’t care so much about, but we feel the need to offer as balanced of a viewpoint as possible.

International Game Technology’s Mega Jackpots slot Isle O’Plenty pays out an average of over a million each time the jackpot is triggered. This is plenty for players to get excited about, but they add to that some features that have managed to remain fresh since the game made its debut several, several years ago, and that’s impressive in and of itself.

If you like progressive jackpot games, but you don’t care so much about how a game looks, then this could very easily end up being your new favorite online slot.