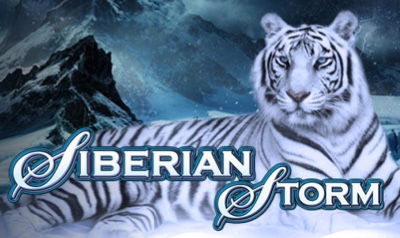 The MegaJackpots Siberian Storm online slot offers a top win of at least €500,000 along with a free spins bonus mode and plenty of other solid wins. There are 720 ways to win on each turn, not counting the scatters, and that effectively doubles to 1,440 since you can get paid in both directions in this action-packed Siberian slot adventure.

The games tied to the Mega Jackpots progressive jackpot often have a particularly high volatility with a low to medium hit-rate. The Siberian Storm video slot breaks that pattern a bit by offering a ton of ways to get paid on every single spin along with one of the highest hit-rates that you’ll find in an online slot that includes a serious progressive.

In terms of gameplay, that really sets the tone, but the inclusion of bonus features that can give you tons of extra opportunities to get paid really pushes it over the top.

As the name implies, you’ll be on a Siberian adventure in this title with wolves, tigers and other symbols laid out in front of a frozen forest land that’s typical of what you would find in that part of the world.

Something that’s at the core of why this game has maintained such a popularity over the several years that have passed since its launch is the basic format of how it’s set up. Consider the following:

Despite having so many ways that you can get paid in this title, players have bet sizes that are pretty small available, and that helps to keep things as inclusive as possible in terms of the amount of players who can enjoy what this slot has to offer.

A lot of the gameplay itself is based around the regular pay table here because the format sets things up for players to get a lot of value from the high hit-rate. With that having been said, there’s nothing more exciting than catching a big jackpot or some serious value from a bonus feature, and the way you activate those are tied into this format as well.

The black and white Siberian tiger is the wild symbol in this game. We want to point out that it only makes an appearance on the second, third and fourth reels. Likewise, it only substitutes for the regular pay table symbols and not for the Mega Jackpots scatter or the tiger’s eye scatter.

The thing to understand about this wild is that it provides more value than it might initially seem because of the all ways format. If you get a wild on one of the middle three reels, then that makes it much easier to hit multi-line wins that you would have missed out on without it.

Picking up five of the tiger’s eye with at least one on each reel triggers a set of free spins. For every left to right combination of five, you’ll have eight free spins added to your total. You can earn an initial amount of up to 96 total free spins to begin with, and that’s a pretty substantial total. You’ll also be given a flat 50x win just for starting the feature for each combination of five as well.

During the feature itself, you can add more free turns to your total and get more 50x wins for getting five of a kind along these lines as well. You can earn up to 240 total free spins before the bonus feature cuts itself off, which includes re-triggering several times.

The Mega Jackpots symbol appears on every reel as a scatter symbol. You can win some solid payouts for it along these lines:

Keep in mind that these wins are awarded no matter where these symbols appear on the game board, but you can never get more than one of them on each reel because of how the game is designed.

For the progressive jackpot, you’ll always win at least €500,000, but the average payout for it is on up into the seven-figure range. Note that you’ll qualify for this prize no matter how much you wager per spin, which is great since it’s inclusive of players at all stakes.

Aside from getting five of the Mega Jackpots symbol, as noted above, there’s a second way to win the progressive in the Siberian Storm online slot. After each spin, there’s a randomly generated chance to just automatically win the jackpot. However, this chance is increased proportionately with your bet size, and that’s actually important for players who want to manipulate their chances of winning, as you’ll see below.

How to Win at MegaJackpots Siberian Storm

We like when players have strategic options that change their chances of winning in some form or fashion, and you’ll get that with this game as well. IGT has set this title up so that you get proportionately better odds to win the progressive with larger bet sizes, and that’s the source of our recommended strategy.

Players can pick and choose their bet sizes along these lines to manipulate their chances of winning and of their volatility overall.

The regular pay table for this game is really interesting in terms of how it fits with the overall high hit-rate that the slot has to offer. The largest regular payout is 1,000x for five of the Siberian Storm online slot logo symbol, but you can get this multiple times if you pick up multiple ways to win it. For example, one symbol on the first three reels with two on the fourth and two on the fifth would give you this win four ways for a total payout of 1,000x.

Finally, the lower end of the table has five different symbols in different colors, including a necklace and a horn. These pay from 125x for five down to 50x for five just depending on the symbols.

When we look over a game like the Siberian Storm Mega Jackpots slot, we want to make sure that we accurately portray the positives along with any negatives that we see. For the positives in particular:

And now a couple of negatives:

We don’t think that these are very serious negatives, but some players will feel that way. If you do, then check out the other progressive slots we’ve reviewed to find something that fits more of what you’re looking for.

The Siberian Storm video slot is a great example of the rare case of a progressive jackpot slot having a more reasonable volatility. This is achieved through an intelligent and strategic approach to the overall pay table and the way that the pay schedule was constructed as a whole, including the features.

We love that you just need five scatters to activate the top progressive prize instead of using convoluted bonus rounds or other mechanisms as well, and the Siberian environment looks great too.