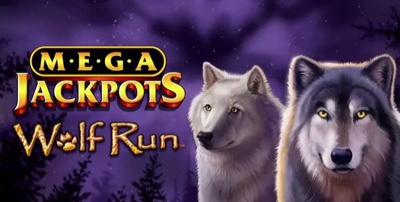 The Wolf Run progressive slot by IGT, a part of the Mega Jackpots progressive network, is a 40-payline game that centers around a number of wolves out in the wild in a forest environment. The gameplay for this title is based mostly around the €500,000 minimum progressive jackpot, a free spins mode and some good value from the regular pay table. Use the list of online casinos that offer Wolf Run below and compare current bonus offers.

International Game Technology has a lot of games that use a lot of different concepts, and with the Wolf Run video slot, you get something that’s a bit outside of the box. This game features a wolf theme with a fun forest background that shows snow-capped mountains in the background. The visual appeal is obviously strong here despite the fact that this title is ultimately decades old considering it was first released in a land-based capacity.

With that said, it has a great aesthetic from a graphical standpoint, and the gameplay stands out as well.

On the gameplay side, you’ll see that this title is based a bit more around what happens on the regular pay table than many other progressive jackpot slots. There is a bonus feature as you’ll see below, but the hits that you get from the wilds and other standard payouts make up a substantial portion of the action as a whole.

With an emphasis on more pay table-based action, it’s not hard to understand that this title has a format that’s based around accentuating that style of play. This leads to the following:

The layout here is really geared towards action, and we think it achieves that goal considering the style of play that comes as a result of how this title is set up.

You will not find a ton of fancy, convoluted bonus features in the MegaJackpots Wolf Run online slot. Instead, there is a core set of features that help to bring out the normal experience that you get from playing so that you aren’t relying on rare events (ie: triggering a special feature) to get a lot of excitement from what this title has to offer.

There are two wild symbols in the Wolf Run progressive online slot. The first is the Mega Jackpots symbol, which is also responsible for triggering the progressive, and the second is the symbol with the blue trim of a wolf howling at the moon. They can be mixed and matched to give the following winning combinations:

This five of a kind combination is the best non-progressive win that you can have in this game, and you’ll actually be likely to get it on multiple paylines at the same time. This is because the Mega Jackpots wild symbol always appears stacked.

With stacked wilds, it’s much easier to get several winning combinations all on the same spin. These combination payouts increase the amount of your average prize while simultaneously increasing your chances of winning in the general sense. Because of these factors, it’s obviously a very welcomed feature.

In many video slots, you’ll find that a free spins mode is very value-packed with low chances to win. International Game Technology took a little bit of the opposite approach in the Wolf Run Mega Jackpots slot. Each individual time that you earn the free spins mode doesn’t overwhelm you with value, but instead, you’ll have much better chances of hitting it throughout your session.

There’s a bonus symbol that only appears on the middle reel, and it’s always stacked. If you get at least three on the reels at once (four is possible because there are four rows in the game), then you’ll have five free spins to play through. During this mode, you’ll get a 2x multiplier on all of your payouts (except for the progressive). Note that the wild symbols cannot substitute for the bonus symbol.

The significance of the way this free spins mode is set up is that it follows the pattern we’ve shown so far of the game being based around regular, consistent value and payouts. It’s a really fun way to set up a progressive title that you don’t see all the time, and we like the gameplay variety that IGT brings to their portfolio along these lines.

The centerpiece of the Wolf Run online slot is obviously the progressive jackpot that’s ran as a part of the Mega Jackpots network link. There are a few things you’ll want to know about this top prize, especially if (like most people) it’s the main reason that you’re playing this game in the first place:

On this last point, there are two ways to win. First, if you fill the entire game board with Mega Jackpots symbols during either the regular game or free spins (they’re always stacked in each), then you’ll trigger the jackpot. Alternatively, after every single spin, there’s a second chance to win it based on a flat percentage chance. The game automatically adjusts your odds of winning this particular prize based on your bet size as well, so everything is kept fair for players between low and high stakes.

How to Win at MegaJackpots Wolf Run

Because the Wolf Run Mega Jackpots progressive slot is centered primarily around the €500,000 minimum jackpot, pretty much any strategy you can use will center around how you relate to that jackpot as well. Here are the three rules you need to know about how you can affect your odds of winning the progressive:

As a result, you can maximize your chances of winning overall by increasing the total amount wagered in your sessions, and there are two ways to do this. First, you can increase your bet size per spin, but that’s not optimal for all players because of various bankroll management strategies. Alternatively, you can lengthen your sessions, which can include picking this game over others for periods of time, especially when the jackpot is on the higher side.

The two wild symbols make up the largest regular win at 1,000x for five, but you can also win some other mid-range prizes that help to keep the volatility reasonable. Either of the other wolf symbols (in dark gray or in white) will pay out 400x for five of a kind, which can become several times over with a stacked wild in there or 800x during the free spins round.

On top of that, there are two totem symbols that each pay 250x for five on a payline (or 500x during the bonus mode). These make up the remainder of the mid-range payouts.

A total of six card rank symbols start with the red A and blue K for 150x for five of a kind combinations. At the bottom of the pay table, players can earn 100x for five of the purple Q, green J, yellow 10 or orange 9 symbols, which are reasonably high for being the lowest win in the whole game for five on a line.

We have a few things, both positive and potentially negative, that we want to point out here before we wrap up our discussion of the Mega Jackpots Wolf Run slot. First, a few pros:

There are also a couple of potential cons that we’d like to bring attention to here as well:

While we think these two points are pretty minor, we still wanted to point them out. If you don’t know if you’ll like this game, we have in-depth reviews of a number of other IGT slots that center around the same linked network jackpot.

We like how International Game Technology put together this game in a way that it brings plenty of attention to the progressive jackpot while still giving players sufficient gameplay and winning hits from the regular pay table. That’s not a mix that’s easy to get right, but we think they did in the MegaJackpots Wolf Run online slot. If you’re a fan of the outdoors and big jackpots, then this game will give you chances for a life-changing prize just waiting at the end of a single spin.