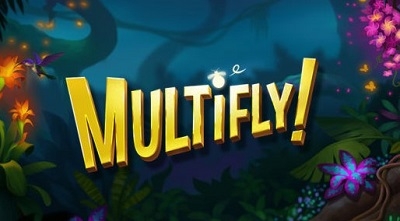 Yggdrasil Gaming’s Multifly online slot takes players into the rain forest to see a number of different types of lizards and other reptiles. The gameplay puts a new twist on the all ways format, and the action is serious with lots of multipliers and ways to get paid more than usual for your wins.

With the Multifly video slot, the first thing that you’re going to notice is the gorgeous scenery and symbol set. You’re taken to a tropical rainforest with beautiful flowers, trees, vines, plants and animals on the game screen.

While Yggdrasil Gaming obviously made this game look tremendous, they also made sure that the gameplay itself was at a high level as well.

One of the things that you see with this is the way they have incorporated features into the gameplay that we haven’t really seen before. These are largely their own approach and modifications to existing features, but it also includes things that we’re not sure have ever been done in other games.

The end result is a great mixture of a strong presentation and a tremendous style of play that come together in a really smart way. What’s more is that they didn’t need to be basing the game on some popular brand from other forms of media, which goes to show that this developer can create an excellent title from anything.

The format and layout for this game are at the core of the gameplay because the features were based around how this title is laid out. Here’s what to expect:

It’s worth pointing out that the volatility of this game is in the medium-low range, and a big part of that is having so many ways to win in comparison to the bet size. This level of volatility means swings that aren’t very severe in general, and it reflects the high hit-rate that the game has overall.

There is no single feature that this game centers around. Instead, you have a collection of different features that all add value in different ways. Bringing these together allows a sort of compounding effect where you can end up with some pretty serious pays.

Some people call this an avalanche feature, and others call it a dropdown feature. In either case, it’s the same thing: After each winning combination, you will be paid out normally before the winning symbols explode to allow new symbols to fall down in place from up above.

One of the key things that Yggdrasil did to set the Multifly online slot apart is that you get a wild added to the reels in a random open position after each win. This plays into the reel multipliers feature that we’ll look at below, but it also just plain gives you better opportunities to get paid on the dropdowns, especially considering that the all ways format is in play.

When you get a wild on the reels during a dropdown, it will increase the multiplier for that reel for the subsequent dropdowns. The level of multiplier is shown at the top of the reels under each respective lizard.

What this does is that it multiplies the effective number of symbols for a given winning combination for that particular reel as if there were more symbols on that reel as a part of the all ways format. In essence, this will simply increase the size of your wins, and because they always happen on the same reel where the wild symbol fell, they’re worth even more than you might otherwise think.

One of the lizard symbols is a scatter, and that is denoted by the scatter text on the actual symbol. When you get three of these on the reels at the same time, you will activate the free spins feature.

You can imagine that having so many multipliers available will give you lots of serious value.

How to Win at Multifly

The thing to remember about the Multifly video slot is that you have some flexibility with your bet sizing thanks to the low volatility. Increasing your bet size to take advantage of this is definitely an option because you’ll get bigger wins when you hit some serious combinations (especially with some help from the multipliers), but you’ll also not have to worry as much about any bad swings because of the low volatility and high hit-rate.

The wins for this game are listed in coins, and you have 20 coins spent per spin. The red parrot symbol earns players 80x for five of a kind, and you can make it 60x for five of the purple toucan. The green frog and blue newt symbols each give players 60x when you line up five of a kind.

The card rank symbols follow from there, and they come in a gorgeous font that fits the jungle theme perfectly. With the red A and purple K, you wins will be worth 30x for five of a kind. Five of the green Q gets you 20x, and five of a kind of the light blue J earns 16x. Finally, wins of 14x and 12x are yours for five of the green 10 or dark blue 9 symbols, respectively.

We understand that the play style of the Multifly video slot may not be a good fit for everyone, so we’re going to summarize the overall pros and cons of the game here.

As a result of these pros and cons, we believe that the majority of players will at least find something they enjoy about this game. However, it’s definitely not for every single player out there because of the focus on having a lot of small and medium wins to keep your account balance up instead of forsaking that for a chance at some larger wins that come less often.

In any case, it’s a solid game that shows a high level of gameplay and production values from one of the best developers in the online slot space.