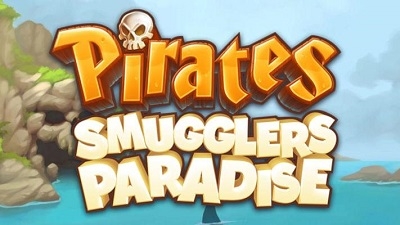 The Pirates Smugglers Paradise online slot by Yggdrasil Gaming brings players to an island beach environment where you’ll try to run up winning clusters on the reels. There are a lot of ways to pick up payouts in this game including a high hit-rate style of play and a very in-depth set of bonus features.

An Introduction to Pirates Smugglers Paradise

One of the things that has worked as a motif for many television shows, children’s toys, books, movies, video games and tons of other forms of media is a set of pirates out looking for treasure.

The Pirates Smugglers Paradise video slot is an example of Yggdrasil Gaming using this concept in a way that makes sense without it being taken too seriously.

That isn’t to say that it’s taken as a joke either, but you’ll have a fun pirate crab with a hook for one of its claws standing on the edge of a ship cheering you own with an evil mustache while you play if that tells you anything.

The presentation is a lot of fun, but it’s also not over-produced. The gameplay is also set up to be fun while not being taken to some hyper-serious level that some games try to do where everything comes across as dire in nature.

The format for this slot is a bit different than most. In fact, we can’t think of another game from the tons that we have seen in the industry that works like this one. Here’s what to expect:

The volatility of this game is low. This is because of how the features work and how the pay schedule is set up. The hit-rate is fairly high as a result, and you won’t have to worry about much in terms of big swings.

The atypical format of this game lends to some gameplay that’s a bit different. However, once you see how the wins are figured and how the features and gameplay flow work, it’s not that much different of a feel compared to many other video slots even though there’s a lot that’s fun and unique here.

On the most basic level, you’ll need a cluster of at least six symbols to get a payout. However, if you get two different clusters on the reels at the same time, then you’ll activate the cluster combination feature.

Yggdrasil decided to do something a bit different with an avalanche-style feature in this game, and it works more like a re-spin feature instead. After every win, after symbols are converted along the lines of the above, you’ll see all of the symbols freeze in place to give you opportunities to let all of the losing symbols drop down with new symbols taking their place.

Note that these re-spins are all free, and you don’t have to worry about them running up a cost or anything like that.

The sign hanging on the left side of the Pirates Smugglers Paradise online slot are for treasure maps that help to trigger the free spins mode. If you collect three total during a single spin and its respective re-spins, then you will be given seven free spins.

You get three modes to pick from for this feature:

On this multipliers point, you increase the multipliers when you fill an entire row, starting with the bottom and working your way up, with matching symbols.

How to Win at Pirates Smugglers Paradise

The whole style of gameplay around this slot is based around the idea that you’ll have a high hit-rate with a low volatility, but your wins are worth more than you’ll expect because of how all of the features work. This includes both what happens in the regular game mode and the bonus round.

Generally, we recommend that players increase their bet sizes when it comes to low-volatility games, and the Pirates Smugglers Paradise video slot is no exception.

Finally, we have the lower-tier symbols. This includes the red heart, the purple spade, the green club and the blue diamond. For all four of these symbols, you’ll have wins of 2x/50x.

Yggdrasil Gaming knows how to really put a game together, and that includes both the gameplay side of things and the overall presentation. With the Pirates Smugglers Paradise online slot, you get to see both sides of this equation in full effect.

On the one hand, you have the presentation with the numerous characters. Even the low-tier and mid-level symbols look great, and it all happens in front of a beach scene with a good style of animation. While the concept is handled in a fun way, it’s serious about wins without taking itself too seriously on a conceptual level.

On the other hand, you have the play style, which centers around the atypical way of handling cluster pays. With symbols transforming to higher-paying symbols, multipliers and extra wins from the re-spin feature, it’s not difficult to see how much value is waiting for you and how much action you’ll have to work with.

We really like what they did with this game. It stands out without being too far outside of the box, which is the perfect balance overall.