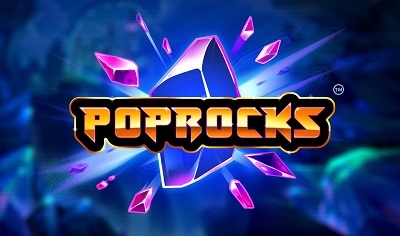 The PopRocks video slot by Yggdrasil Gaming uses a different type of format than you’ve probably ever seen before. This game gives up to 72,188 ways to win on each spin with a minimum of 486, and it puts some serious twists on gameplay mechanics that players will already be familiar with.

An Introduction to PopRocks

There are only so many things that you can do with slot formats without going so far outside of the box that it alienates players. Yggdrasil Gaming is great at riding that line between doing too much and too little in this regard, and their PopRocks video slot is an excellent example of them doing this well.

In PopRocks, players get serious opportunities to run up their chances of winning with a format that comes alive and changes shape after each win.

The whole idea here is that the gameplay is something different than you wouldn’t be used to previously. However, the game also has a pretty strong aesthetic appeal as well, and we’re glad to see that Yggdrasil didn’t forget that players want something nice to look at while they play.

In any case, this is a game that pushes the limits of the typical video slot format while still giving players something they will be familiar with to enough of a degree that it doesn’t push them outside of their comfort zones too far.

The setup for this game is a bit outside of what you’ll be familiar with, and we’ll go more into the details of how it works further down below when we talk about gameplay. However, here’s what you can expect in the general sense:

The volatility here is in the lower end of the medium range. Having such a large number of ways to win keeps the volatility reasonable while the large amounts of value you can get from the format changing occasionally keeps it from being at the rock bottom of the available range.

The gameplay of this title centers almost completely around the difference in format, so we’ll be covering that extensively so that you know exactly how it works and what to expect before jumping in.

When you get a winning combination, it’s paid out normally in this game. From there, those winning symbols pop to disappear from the game board, and two new symbols will be added at random to the top and bottom of the remaining symbols for that reel.

From there, you’ll have another chance to evaluate for winning combinations, and this process continues over and over until there are no new wins available.

There are multipliers that can come into play with the PopWin mechanic as well. On the left-hand side of the reels is a counter, and it’s counting the number of symbols that pop on a given paid spin and the subsequent Popwins.

Once that counter gets to seven, it resets and increases the multiplier by a factor of one. This means that the number of ways you can win increases along with a win multipliers, which gives you opportunities for even more serious payouts.

When you get every reel extended to have seven symbols each, then you will unlock the special wild feature. One wild is unlocked in a random place, and the multiplier will increase by two instead of one when you collect seven pops.

Once you get to this point, you’ll only get one extra symbol added per pop so that things stay at seven symbols per reel.

Once you’re at this point, it’s much easier to get winning combinations because there are so many symbols available on each reel, and that means you have better chances of carrying things on for several more re-spins.

There’s a purple gem symbol that’s actually the best-paying symbol in the game. It does not appear on the reels normally. Instead, it can only appear as a replacement for a pop. With that said, it has wins that are worth significantly more than any of the other symbols, so it can definitely add a lot of value in situations where you get several pops in a row after a given paid spin.

How to Win at PopRocks

This game has a deceptively moderate volatility for how high the hit-rate is. The reason for this is that the times you get lots of pops on a given spin will give a disproportionately high amount of value compared to anything else in the game.

It’s very interesting how that works, but from a bet sizing perspective, it gives you a lot of flexibility. With that said, we simply recommend picking a bet size around what you would normally use. You don’t need to do anything more special than that to adjust for this game.

The red gem symbol that only appears during the pops pays a really high 100x for five of a kind. You need to keep in mind that getting this combination will usually mean that you’ve picked up a multiplier, so you’ll actually get more value from this one combination than you might think on average.

Aside from that, four upper-tier symbols make their way to the reels. The golden glowing figure with wings get you 10x for five of a kind. Five of a kind combinations of the green dragon pay 10x as well, and you will get the same win for five of the purple or blue figures in similar styles. Again, these four can only appear from pops as well.

The change in how the format for the PopRocks video slot moves around is really interesting. It’s a gameplay mechanic unlike anything we’ve ever seen before, and it goes to show that Yggdrasil Gaming can come up with something fresh at any time. The action is serious, and the presentation is aesthetically pleasing.

With that said, there is some aspect of this game’s style that may not appeal to all players. We think it’ll appeal to most, but it goes just a tad too far outside of the box for some most likely. We think that the limited number of symbols that can only appear during pops might be what made it too much. In any case, it’s definitely worth trying because it could easily become your new favorite title.