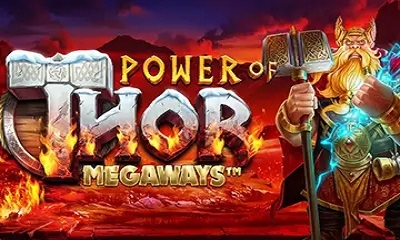 Pragmatic Play’s Power of Thor Megaways online slot gives players thousands of ways to win. The entire game is centered around lots of ways to get paid over and over again. You’ll also have free spins and a cascade feature that adds more winning opportunities per spin.

Casinos with Power of Thor Megaways

An Introduction to Power of Thor Megaways

We really like to see games that step outside of the sub-genres they’re closely associated with. For example, the Power of Thor Megaways video slot from Pragmatic Play does this well. They get away from the tropes you commonly see with Norse mythology-inspired slots.

Instead of following what’s been commonly done, the style of play is different. It’s all about a tremendous amount of overwhelming action.

Along these lines, gameplay is obviously going to be an important part of the overall experience here. The feature set combines with the format and regular pay table to give tons of ways to get paid.

However, that’s not the only thing to look forward to here. From a visual standpoint, this is a tremendously crafted title. Pragmatic Play definitely went above and beyond to make sure that this is a game that you’ll be fully immersed in because of the detailed graphics and visual appeal. The aesthetics are top-tier, and the soundtrack perfectly fits as well.

The overall format here is geared toward action. If you’ve never played a Megaways slot before, you’re in for a treat. However, if you’re familiar with the style, you’ll still get something a bit different than most of the others. Here’s what to expect:

The hit-rate for this game is particularly high. Moreover, you’ll generally get several wins at a time when you do hit a winning spin. Because the value of the features is so substantial, the volatility falls into the medium range.

Additionally, all wins are multiples of your overall bet size instead of coin sizes. This makes things easier to manage in terms of keeping up with the actual size of payouts.

With the Power of Thor Megaways online slot, players have a lot of gameplay depth. A number of features that hit often are the centerpiece of your experience. However, some of the less frequent features offer a lot of extra value. This balance between features that hit at different rates for different amounts of value, all cast on the Megaways format with tons of ways to win, drives the overall gameplay as a whole.

Wild symbols are really important in games with so many ways to win. This is because they’re more helpful with more ways to win, so they’re super helpful here.

To keep things balanced in the game as a whole, the golden wild symbols can only appear in certain spots. This is on the horizontal reel that spans over the top of the middle four reels. In essence, the wilds can only appear one at a time naturally. Additionally, they can only appear on the second, third, fourth and fifth reels.

With that said, other features have other ways to win with more wild symbols.

This is also known as a tumble feature, but the idea is the same. When you get a winning combination of any size, this feature is triggered. As a result, this is the most common feature that you’ll see in the game as a whole. In fact, they’re even a little more frequent than the wilds.

After your regular wins are paid out normally, every symbol involved with a winning combination disappears. The resulting empty space allows new symbols to fall down into place. As a result, you’ll get more opportunities to win using the Megaways format. The Power of Thor Megaways video slot gives you chances to win several times on the same turn as a result of this feature.

As long as you keep getting winning combinations, this feature will continue at no cost. There’s no limit to how many times you can win, but the total value of the win maxes out at 5,000 times your total bet size.

Thor’s hammer is always a centerpiece of any type of media he appears in. This slot by Pragmatic Play is no different. This time around, the hammer appears on the top horizontal reel only. Additionally, it always appears as a symbol that’s two spaces wide horizontally.

When this hammer lands on the horizontal reel at the top of the game board, it triggers the Hammer Feature. This feature works by giving players extra wilds on the reels. More specifically, every symbol below the two spots taken up by the hammer symbol turn wild. This adds a ton of extra wilds to the reels.

What’s even more is that this hammer symbol can show up normally or as a part of the tumble/cascade feature. This means you have even more opportunities to land lots of extra wilds on the game board. With so many wilds available at once, it’s clear that you’ll have serious opportunities for tons of sizable wins.

While the tumbles, wilds and Hammer Feature offer a lot of value, the free spins host the largest payouts. The golden circular symbol is the scatter, and it shows up on all six reels. When you get at least four of them, you’ll trigger free spins. However, it’s possible to get as many as nine of them on the board at once.

The number you pick up is what determines your number of free spins:

During free spins, each tumble increases the multiplier by a factor of one for the rest of that spin. That means more tumbles give better wins than the original spins.

How to Win at Power of Thor Megaways

While the hit-rate for the Power of Thor Megaways online slot is very high, the volatility is in the medium range. Because of this, we recommend simply choosing a bet size near the average that you’re comfortable with. No adjustments to increase or decrease this value are really necessary or advantageous in this particular title.

The payouts for this game really show that a lot of small and medium wins are available. However, some more sizable pays are also something to look forward to. This balanced pay table ties directly into the medium volatility.

With the card rank symbols, things drop down a bit. The red A pays 1.5x for six. This works its way down to the 0.6x level for six of the purple 9 symbol.

What players will really enjoy about the Power of Thor Megaways video slot is the padding that the selection of features add to your overall winnings. As if that wasn’t enough, the overall concept is utilized in a particularly smart way in this title, compared to it only being an afterthought like what players see in the majority of titles.

On top of that, as a part of this software company’s offering of games as a whole, this is a game that serves an important role since it is a good fit to many people. The gameplay in this video slot brings a serious amount of action, and we really enjoy how the visual appeal gives video slot fans an overwhelmingly immersive gameplay style compared to just being an unimportant detail.