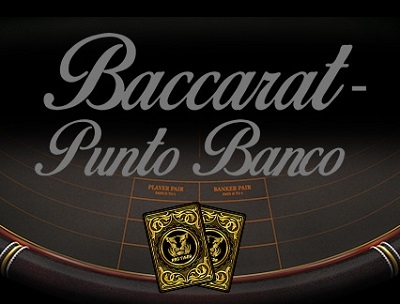 The most popular form of Baccarat is also known as Punto Banco, and it’s one of the oldest table game titles that you can find anywhere in the casino world. It was originally most popular among high rollers, but the online world opened it up to a wider range of available stakes.

An Introduction to Punto Banco

The idea behind Punto Banco is that the dealers at a table are going to play out all of the action for you so that you don’t actually have to do anything with the cards. This can seem a little misleading at first because the game somewhat looks like blackjack when you first start to play.

The detachment from actually handling cards and making strategic decisions during play is largely a result of it originally being marketed toward high roller play only.

Punto Banco was originally set up so that it was only played for fairly high stakes, and this gave the game a bit of an allure to it that lasted until it became more popular in online casinos. From there, the available stakes for the game dropped quickly, and it became widely accessible to players at all levels.

Now you can play for pennies at a time and enjoy the same level of gameplay and action as the high rollers had exclusively to themselves decades ago.

When you play Punto Banco online, you’ll get a little bit of a different experience than land-based tables, even if you play with a live dealer online, because of the physical sizes of the tables that are sometimes involved. A brick and mortar table for this game can sometimes host more than a dozen players, and that means that there are usually three or four dealers at the table to reconcile bets and oversee the game.

Online, all of this hassle is taken away from things, and you’ll get a smoother style of gameplay with less waiting between hands. That’s the only key difference, however, but we thought it was worth explaining.

From here, let’s get into the actual gameplay procedures for this classic table game.

How the Game Proceeds

There are a few parts to the rules that we’re going to take on bit by bit because taking on all of them at once is a bit too much to ask. Here’s the basic gameplay:

That’s a very simplistic view of how things go, but now we’ll go back and fill things in a bit.

There are only three betting options in traditional Punto Banco-style Baccarat:

However, you’ll sometimes see what’s called a pair bet for either the dealer or the banker. This wins when the first two cards dealt for that specific hand have the same rank (ie: two jacks or two eights).

The procedure for the cards being dealt isn’t something that players have to worry about so much because the house will handle everything. With that said, many players want to know how it’s done specifically so that they can make sure that nothing shady happens as the cards come off of the virtual deck.

For those players, we offer the following:

And here are the potential conditions for the banker receiving a third card:

These rules are pretty complex, and they’re based on the value of the player’s third card and the banker’s starting total with two cards, but you won’t have to keep up with all of that at the table if you don’t want to since it’s all handled by the banker.

How to Win at Punto Banco

Strategy for Punto Banco is somewhat interesting because of how some of the payouts work. If you win with a player bet, you get back 1:1, but if you win with a banker wager, you’re paid 19:20, which is 5 percent less than even money.

The reason this is important is that, on average, the house edge of the banker bet is very slightly better than the player bet. However, the atypical 19:20 payout can cause your wins to be rounded down with some software providers just depending on how much you’ve wagered and which coin denominations they use. This can cause you to actually have a worse effective payout percentage in some cases.

Note that no matter how many decks are used in the game, and you can see anywhere from one to eight used in online games, the banker and player bets are always the best options and are generally within 0.1 percent of each other in terms of house edge.

The popularity of Punto Banco shows that players really connect with it in a way that you don’t always see with table games. A big part of it is the simplicity of the game combined with how deep the pattern-tracking ideas go and the types of things players do to try to figure out which side (banker or player) is more likely to win the next hand.

The house advantage is also really low if you stay away from the tie or pair bets, in the range of 1 to 1.2 percent, which is one of the best payout rates you’ll get in a table game as well.

Which online casinos have Punto Banco?