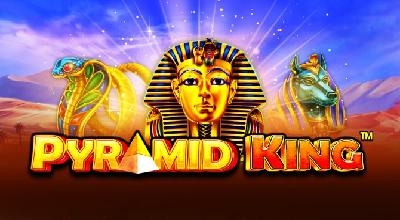 The Pyramid King video slot, a title produced by Pragmatic Play, is a 25-payline adventure based in an Egyptian setting. With three jackpot prizes, a free spins mode, expanding symbols, wilds and other goodies, this is a great title that’s completely jam-packed full of action both on the regular pay table and from the bonuses.

An Introduction to Pyramid King

If you’ve been around the slot world online for any amount of time, then you’ve noticed that there are a lot of games that use an Egyptian theme. For a game to stand out in that genre from all of the rest, it has to really bring something special in terms of gameplay and visual appeal.

The Pyramid King online slot is Pragmatic Play’s way of showing that they know how to stand out in a crowded sub-genre for just these reasons.

On an aesthetic note, the visual appeal is pretty serious. There’s a gorgeous scene in the background with a river flowing in front of pyramids, and the reels are set up in a golden scene. The reels themselves have purple backgrounds with markings on them that look like they came straight from inside of one of those pyramids, and the symbols look great.

The gameplay of this title is what stands out the most, however, and that’s because it’s set up to have layers of features that really drive the experience. If you like a lot of action without the volatility getting out of hand, then this is a title to check out.

While you get a number of betting options in this game, it’s actually set up in a way that’s pretty easy to just pick the size of wager you want and to go on with your play. Here’s what to expect:

Between the pay table and the feature set, the overall volatility for this game is definitely right in the middle of the medium range. It will pay out pretty steadily with a balanced level of swings.

The feature set is pretty serious for the Pyramid King video slot. There are a number of bonuses and other ways to win than the regular pay table, and we’ll walk you through all of it here.

The first symbol that most players want to know about is the wild. In this game, it’s the golden sarcophagus symbol, and it shows up on every one of the five lines.

This wild has some pretty solid payouts as well, but keep in mind that these are all listed as numbers of coins being won, which will be multiplied by the number of coins wagered on each line.

You’ll get the best payout available for each payline from left to right. This means if you have three wilds in a row, for example, but they could be used to make a four of a kind combination of another symbol instead, then you’ll get the higher payout of the two.

It’s worth noting that the wild does not substitute for the scattered scroll or the money symbol of the man riding a camel.

The scroll symbol appears with the word “bonus” under it, so it’s pretty easy to identify as the bonus symbol. If you get three of them on the reels at once, then you’ll activate the free spins bonus round, which always starts with 10 free spins.

At the beginning of this round, a symbol will be randomly chosen from all of the non-scroll symbols. Note that this can include the wild or the money symbol. This is a special expanding symbol during the free spins feature.

The way this works is that every free spin pays out your wins normally. From there, all of the expanding symbols will grow to cover the entire reels, and they will all pay on each payline regardless of the reels they fall on. For example, if you have these matching symbols filling up the first, third and fifth reels, then they will behave as if you have three of a kind wins.

The payouts you can get from this feature are tremendous, but there’s more. If you get three or more scatters during this feature, you’ll add another 10 free spins to your total, and there is no maximum to the number of times you can do this during one activation of the feature.

Money symbols can show up on each reel. They have random numeric values, or they can show the minor or major jackpots. When you get at least six of them on the reels at once (they show up stacked), then you will activate the Money Re-spin Feature.

If you run out of re-spins or completely fill the game board with them, then that ends the feature, and your winnings are determined along the following lines:

The three jackpots are not progressives but instead are based on multiples of your total bet size:

How to Win at Pyramid King

Because of the way the volatility and betting controls work, there’s not really anything special that you need to do here. Instead, picking a bet size near the middle of the range you’re comfortable with and jumping right in is all you need to do since there are no real adjustments to make for a medium-volatility title on the betting end of things, and none of the game’s options affect your RTP or payout percentage.

The pays for this game are broken up into two groups of symbols. The upper group starts with the jackal head, which pays 500x for five of a kind. Things drop just a bit to the golden ring for 400x for five, and five of a kind combinations of the golden snake pay 300x. You can also win 200x for five of the ankh symbol, which looks like a cross with a loop at the top of it.

Card rank symbols round out the rest of the pays. The pink A, red K, green Q and blue J symbols all award players 50x for five of a kind on a payline.

There’s a lot to be happy about in this game, and Pragmatic Play definitely brought a high level of play with the Pyramid King video slot. The visual appeal is strong as well, and the action is high, so this is a game that will be a hit with fans of all different kinds of titles because it’s such a well-balanced experience.