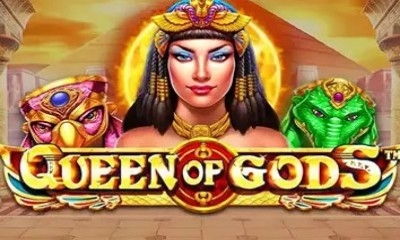 Pragmatic Play’s Queen of Gods online slot takes players into Ancient Egypt during a time of warring gods and scheming royalty. The free spins mode of this game brings chances for serious payouts on top of stacked wild multipliers and other ways to get big wins.

Casinos with Queen of Gods

An Introduction to the Queen of Gods Slot

One of the most popular genres in the online slot world is based around Egyptian themes. Virtually every top software provider will have several titles in this group. Pragmatic Play slots are no exception, and the Queen of Gods video slot is another entry into this particular arena. However, they brought something fresh and different to the table to make the game stand out as a result.

The combination of an awesome presentation and action-oriented game mechanics make this title different than most of what’s already available.

The first thing that stood out to us is the look of the character symbols on the board. A few different Egyptian deities are shown in a really interesting art style. Additionally, they’re presented in different colors to make them stand out visually from the rest of the game. Along with those symbols, Cleopatra makes her appearance as the main symbol. That makes sense because, much like the Queen of Egypt Exotic Wilds slot, she’s the focus of the presentation.

Gameplay is handled in a smart way here as well. So much of what this title has to offer comes from the wild symbols. They’re used in a different way than most, however, because the game does not depend on them creating winning combinations in and of themselves. In addition to that, an incredibly valuable free spins mode is made available as well. Combining all of this with the great value found on the regular pay table creates a tremendously rewarding experience for players.

Everything in this game is largely set up around how the wilds work and the different ways they help out. This comes down to the basic format as well. Here we’ll show you the basis of how things are set up and why the ways to win are so straightforward.

This slot has a volatility level that’s lower than average compared to the rest of the industry. However, players may notice in the game rules that Pragmatic Play rates it as about average. That’s because their assessment is in comparison to their other titles. Additionally, this comes about since their games run lower than average on volatility as a whole. Subsequently, you won’t have to worry about very much in terms of big swings in this game.

We also noted up above that betting can use coins, coins per line, sizes of coins and so on. Most of the time, that means that wins are based on those line bet wager amounts. However, in this case, that’s not how things work. Pragmatic Play has only set wins up to be based on the overall amount you have wagered. We prefer this method because it’s easier to work out exactly how much you’re getting paid for potential wins.

Gameplay and Features for the Queen of Gods Video Slot

The feature set for the Queen of Gods online slot is a bit different than similarly themed titles like Egyptian Ways. Instead of being about raw action, it’s about getting more of a quality over quantity approach. The features and game mechanics come up more often in this title, but you have a more straightforward number of ways to win. This creates a more relaxing style that appeals to a lot of players. Here we’ll show you which mechanics to look out for as you get settled in to play.

The scarabs are etched in gold in a teal bit of stone in this game. They also happen to be the wild symbols, and subsequently, this makes them the most important symbol in this slot. With that said, the first thing we want to point out is that these wilds don’t offer payouts on their own. You would think that they would considering how critical they are to the experience. We thought the same thing. However, Pragmatic Play didn’t disappoint.

These wilds bring on some different ways to help you to get better wins instead. For example:

They have the ability to appear stacked three spots high on any of the middle three reels.

This is a very important detail that you really need to keep in mind. With stacked wilds like this, your hit-rate increases substantially. A lot of this comes down to being able to get multiple wins on the same turn more easily. Additionally, since they can show up on more than one reel at once, this effect is compounded several times over.

With this one dynamic game mechanic, the Queen of Gods’ video slot’s volatility level starts to make a lot more sense. The hit-rate is increased, and you have better opportunities to get more wins per line. Combined, these two elements drop the volatility of any slot.

The main bonus feature of this title is a free spins mode. On the first, third and fifth reels, players can see golden circle symbols. However, these have a pyramid symbol in the center of them. As a result, they’re referred to as pyramid scatters in the game’s pay table.

In any event, these pyramid scatters perform two functions. First off, even though they can only appear on three reels, they pay 5x when all three appear. Again, we see another example of Pragmatic Play cramming more wins into the situation when they didn’t have to. What’s more is that it’s larger than the typical 1x win we see in similar scenarios.

Second, when players get three pyramids at once, no matter their positions, the free spins mode is activated. However, players are given a choice between a few options as for how this feature will actually play out.

We also need to point out that the symbol set is seriously limited in the free spins. This is great for players because only the top four regular symbols and the wilds are available. Not only does this make it easier to hit winning combinations, but it means the payouts you do get are larger than the average prizes from the regular game mode.

The options have to do with picking a number of spins along with wild multiplier levels. The three options are as follows:

A mystery option is also available. This will give you one of the above three options at random. Note that the RTP percentage is the same for each of the three game modes. However, you’ll find that the 15-spin option has the lowest volatility. Additionally, the 8-spin option has the highest.

How to Win at Queen of Gods

One of the key things to take notice of in this game is the volatility. It’s below average, which means you have a betting adjustment available as a viable option. Increasing your bet size slightly will smooth out the volatility to about the medium range relative to your original bet size. However, we only suggest an increase of about 25 to 33 percent. If you go over that level, the volatility can start to get out of hand.

Note that this is a completely optional betting adjustment, and you’re under no obligation to make it. Additionally, if you’d prefer a similarly themed slot with a more balanced volatility baked right in, consider the Cleocatra game.

Payout Structure for the Queen of Gods Online Slot

The entire pay table is pretty easy to remember if you’re into memorizing the whole thing. That’s because it only has four pay levels. Both the Cleopatra and pink/red bird deity pay out 20x for five of a kind. Additionally, the green crocodile and blue jackal each earn 10x when you line up five on a payline.

From there, the red A and green K are each set to pay 5x for five on a line. The blue Q and purple J get you 2x for five as well. These pays are really balanced despite being set up in a way that are super easy to remember.

Pragmatic Play slots are known for covering a really wide spread of gameplay styles and themes. With the Queen of Gods slot, we feel like they achieved a really smooth play style without much in the way of swings. Additionally, you get plenty of action with the Egyptian-themed graphics and presentation. It’s a good mix that we think suits a lot of players who prefer different things.

Which online casinos have Queen of Gods?

What is the Return to Player (RTP) for Queen of Gods?