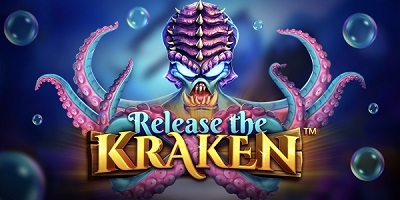 The Release the Kraken video slot by Pragmatic Play brings players down to the bottom of the ocean at the floor to put a fun spin on what would normally be a super serious theme of a giant sea monster that comes to the surface to destroy cities and do the bidding of the gods from various form of mythology.

An Introduction to Release the Kraken

Pragmatic Play has games based on all kinds of different themes, and if you’re familiar with their portfolio, you’ll also understand that they use different overall tones and feels with their titles to give players lots of different kinds of experiences.

The feel of the Release the Kraken online slot shows that Pragmatic Play knows how to make a lighthearted game that’s based on a theme that would otherwise be somewhat dark and serious.

They achieve this largely through this title’s visual appeal, which has a bit of a cartoon element to it. The animations, symbols and background wouldn’t be out of place in a children’s movie to give an idea.

However, the gameplay is still serious with some major ways to get paid on each spin with random features and other goodies to give this slot what’s definitely a feature-oriented style of play.

Betting for this game has been set up in a way so that you can really customize your wagers, or you can simply scroll through all of the available bet sizes if you don’t want to dig around in the details. Here’s what you can expect:

In terms of volatility, this game sits in the medium range. It’s not so high that the swings will be difficult to handle, but it’s also not so low that you’re excluded from opportunities to win some pretty tremendous payouts.

The style of play for the Release the Kraken video slot is all about the feature set, and the regular pay table is almost an afterthought that’s only there to keep you afloat while you wait for your next feature to hit. Thankfully, there are a lot of them to choose from, and they can be triggered in multiple ways.

First off, the wild bubble have some of the best pays in the game and show up on each reel. They do help you to get winning combinations that you would have missed on, but they do not substitute for the bonus scatter, free spins scatter or chest bonus scatter.

Here are the wild payouts for this game:

We want to take this opportunity to mention that all wins in this game are multiplied by the total amount that you’re wagering and are not by the line bet amounts.

There are three different bonus features that can be triggered at random in the Release the Kraken online slot. It starts with the Kraken Locking Wilds feature, which has the reels spin continuously while you get extra wilds, double wins or more on that particular spin.

Another option you can get is the Colossal Kraken Wilds. A random wild symbol is placed that’s three symbols by four symbols on the grid, and it’s guaranteed to hit the reels in some position. You don’t need us to tell you what kind of tremendous wins this can give you.

Finally, there is the Infectious Kraken Wild feature. At least one of the special Infectious Kraken wild symbol will hit the reels, and all of the ones that do will expand into the other positions beside of it to spread a bunch of wilds onto the reels for better chances of winning.

It’s a pretty straightforward feature: Three chests appear, and you get to pick between them to be awarded a random prize. These prizes are scaled according to your bet size, so the more you’ve wagered on that given spin, then the better your payouts will be.

Getting the bonus symbol on the first and middle reels along with a Free Spins symbol on the last reel triggers the free spins mode. You’ll be able to earn a maximum of up to 12 free turns, and the number of paylines increases to 40 for this feature.

Note once again that even though the number of paylines doubles, they are still all from left to right only.

Every time a wild hits anywhere on the game board, you’ll have the multiplier increase by a factor of one for the rest of the feature. This can run up to a maximum of 10. What’s more is that those wilds stay on the screen as you play and move around randomly on each spin until the feature is over.

How to Win at Release the Kraken

The thing to really understand about this title is that there’s not a lot that you need to worry about in terms of strategy. None of the controls with bet sizes and so on will change the return to player percentage of the game, so there’s nothing to worry about there.

Additionally, the volatility is in the medium range. This means that there’s no really any benefit to increasing or decreasing your average bet size. However, you may consider choosing a slightly smaller size and playing the game faster than usual to try to speed up the rate at which you hit features while maintaining a similar amount in bets placed per session.

Payout Structure for Release the Kraken

Five regular symbols make up the top tier of the pay table. It starts with the Release the Kraken video slot logo symbol, which pays 25x for five. The shark and turtle symbols are worth 12.5x and 10x, respectively, for five of a kind combinations. This drops down to the two different fish (green/yellow and blue/purple) that pay from 7.5x to 5x for five.

Four card rank symbols are also available. The yellow A and purple K both pay 4x for five, and you can earn 2x for five of the green Q or red J. These are pretty reasonable wins considering that they are multiplied by your whole wager.

The thing about the Release the Kraken video slot that will stand out to most players is the gameplay. The theme and its presentation are fun, but it’s fairly generic, but the gameplay is really great with how the features and pay table are put together. It offers a ton of action with random features, free spins and more, and that’s a style of play that most players can get behind.