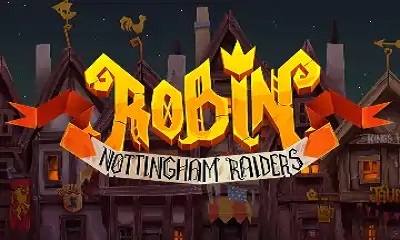 Yggdrasil Gaming’s Robin Nottingham Raiders video slot brings players into the world of Robin Hood. This title has an amazing look and feel, and it brings tremendous gameplay as well. The free spins mode in particular brings several extra ways to get paid.

An Introduction to Robin Nottingham Raiders

Something players have always loved is when an existing theme gets used to make a great title. That’s the case with the Robin Nottingham Raiders online slot by Yggdrasil Gaming. This game is so solid because of the combination of awesome graphics and excellent gameplay.

Yggdrasil is great about providing titles with this type of balanced approach. However, this one is really nice even for their own standards.

The first thing you’re going to notice is that the graphics are phenomenal. The symbols on the game board have almost a 3-D effect to them even though they’re drawn flat. A similar style of animation is used in the background as you have a setting in a small town. The whole idea here is to bring the world of Robin Hood to life, and they did just that.

On the side of the gameplay, there are two main things to look at. The first is the regular game mode, and the other is the free spins mode. In the regular game, you get a reasonably high hit-rate along with some pretty good payouts. However, it’s the free spins mode that really shines with tons of extra features added on. This gives players lots of ways to get paid some of the best payouts available in the slot.

The format for this slot is super easy to get started with. It’s a little bigger than most titles with the same number of paylines. However, that’s something that you’ll get used to virtually immediately. Here’s what to expect:

Something you’ll notice is that all of the wins are based on a multiple of the total amount you’re wagering. For example, if you’re making €3 bets per spin and get a 5x win, your payout is €15 total. If you want to know what they would be based on line bet wins, multiply these given amounts by 20. In this situation, the win would be 100x as a line bet win instead of 5x based on the total wager.

Additionally, the volatility is in the medium-low range for this slot. That gives players some room for some betting adjustments. However, we’ll cover these further down below. The hit-rate is also reasonably above-average along similar lines.

The feature set of the Robin Nottingham Raiders video slot is pretty solid. There aren’t a ton of features, but the gameplay is still set up in a way that’s very exciting. In short, they went for quality over quantity. You don’t get much in terms of random features that essentially just give you a random payout. However, you do get a really in-depth free spins mode along with an above-average hit-rate during the regular game mode.

The golden wolf head symbol is scattered in this game. You’ll see this symbol in various ways in the background scene as well. The payouts that you can get from the scatters are pretty strong. Here’s what you can pick up:

What’s important to understand about these payouts is that they have fewer requirements than payline wins. What we mean is that these scatters don’t have to show up anywhere in particular to pay out. Instead, all you really need is for them to show up anywhere on the board. If that happens, and you have at least three, you get one of the payouts above. It’s the only symbol like that in the game that isn’t required to be on a payline for wins.

There are two types of wild coins in this game: gold and silver. While they have the same payouts, the gold coins give additional features while the silver coins do not. These wild coins give you the following payouts:

The wilds are tied into other key features that we’ll get into down below. However, a key component here is that these gold coins help you to get extra wins. They will lend themselves to giving payouts you wouldn’t have received otherwise. That makes them pretty valuable, especially in longer sessions.

Each time you get a golden coin wild symbol on the game board, it’ll be added to the meter on the right side of the game board. Once you fill the meter with nine coins, they are then shot across the game board to random positions for a free re-spin.

With nine wilds guaranteed to be on the grid, you have serious chances for big payouts. Not only are your chances improved for large individual payouts, but you’re also seeing a boost in your chances for multi-line wins with this feature.

A spin with three or more of the scatter symbol will give you a shot at a set of free spins. You’ll have roaming wilds during this feature. Additionally, the wild collection feature slightly changes. Every time you collect three gold coins, three additional free spins are added to your total.

Moreover, if you get three or more wilds in the same reel, you get an additional multiplier. That’s a pretty cool way to add multipliers that stay active for the rest of the feature.

How to Win at Robin Nottingham Raiders

There are two things to keep in mind as you play the Robin Nottingham Raiders video slot. First, the wild collection status is tied to each individual bet size. Along these lines, you’re better off if you stick to the same bet size long term until you trigger the wild collection feature.

The second thing to note is that the volatility is medium-low. Usually in games like this that also have a higher hit-rate like this one does, you can use an adjustment to your betting that involves a slight increase. That’s viable here, but it’s completely optional. The idea is that you get better payouts, but the swings stay pretty in check due to the below-average volatility.

Aside from the wilds and scatters, the king pays 10x for five of a kind. Robin Hood also gives you 7.5x for five. Along with the wilds, both of these symbols pay for just two of a kind or more. The other symbols we’re going to list, along with the scatters, require at least three.

From there, the lady pays 6x for five while the knight is worth 5.5x for five on a line. Five of the bald Friar Tuck will get you a 5x payout here as well.

All of the remaining symbols give the same payouts. Those symbols are the quiver of arrows, the bow, the baton, the mug, the crossed swords and the turkey leg. All six of these symbols give you 3x for five of a kind.

The presentation of the Robin Nottingham Raiders online slot is top-tier and boosts the entire style of play, and if you have enjoyed playing other games that feature this style of driving concept, then this is a slot you won’t want to miss. The range of features offers plenty of various extra ways to get paid alongside the usual pay schedule.

Due to the large attention from a lot people, this video slot has a valuable spot in this company’s portfolio overall. Additionally, if fun is exactly what you’re looking for in your slots, then you’ll absolutely enjoy the gameplay experience that this video slot brings to your sessions.