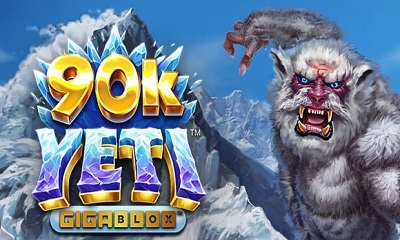 An Introduction to Gigablox

The 90K Yeti Gigablox slot game is based on the eponymous mythical creature. The yeti is said to reside in the Himalayas, where it takes delight in roaming through the snowy mountains. Join him on his adventures and discover thousands of ways to win.

46,656 Ways to Win are complemented by the innovative Gigablox mechanic. Enhance your gameplay with Free Spins and other great features to win up to 90,000x your stake.

We’ll kick off our 90K Yeti Gigablox review by describing the game’s layout. This slot has 6 reels, 6 rows and features 46,656 ways to win. Besides the low and high paying regular symbols, special symbols also appear on the reels as you play. The volatility is quite high, meaning that substantial wins could be made, but the risks are very sharp. With such high volatility, those huge wins are quite difficult to land.

The 90K Yeti Gigablox RTP is pegged at 95.50%, which is a little below the average return for slot games. You can wager between 0.10 coins and up to 10 coins per spin. Massive wins could be landed, as the maximum win is an unbelievable 90,000x your bet!

90K Yeti Gigablox has powerful animations and graphics that could instantly immerse players into the gameplay. A horn-like soundtrack heralds the start of the Himalayas quest, with the yeti roaring every time it lands in the right proportion.

In this section, we’ll take a look at some key features of the game. This slot makes use of Yggdrasil‘s Gigablox mechanic, which features massive symbols of up to 6×6. The reels themselves are enlarged to accommodate these icons, meaning that any symbol on that reel can benefit from this feature. With every spin having at least one Gigablox reel, landing a 6×6 symbol will enlarge the reels to 46,656 ways to win.

Yeti Reveal, Snowstorm Shuffle and Yeti Giga Summon are base game features which trigger randomly. The Yeti Reveal feature will remove snow blox from the reels so that winning symbols could take their place. In the Snowstorm feature, the reels are rearranged to pave the way for possible wins.

During the Yeti Giga Summon feature, only the bigger Gigablox reels of 4×4, 5×5 and 6×6 are possible. Should you land 5×5 yeti with another lower-symbol Gigablox on the reels, you will win the maximum 90,000x your bet. There’s a free spins feature that is activated by landing a combination of the scatter symbols.

The 90K Yeti Gigablox regular characters include lower-paying symbols, such as A, K, Q, J and 10 card suits. Some fairly-paying symbols include mountain rope, a pick axe, a snow tent and the Sherpa featured in the original 9K Yeti game.

In addition, there are some higher-rewarding characters, namely a male and female mountain climber, as well as a fierce looking yeti. The title character awards the biggest regular symbol payout of 4.80x your stake for landing 6 on consecutive reels.

The scatter is represented by yeti’s footprint, and you need at least five on consecutive reels to activate the free spins. Free spins are awarded based on the number of scatters as follows:

While researching this 90K Yeti Gigablox slot review, we found that landing at least five scatters on consecutive reels will activate free spins. For every additional scatter that appears in the feature, you’ll receive one extra free spin, up to 36 total spins.

As the feature starts, the Yeti Reveal feature will come along and take out all snow blox from the reels. Then either the Yeti Giga Summon or Snowstorm feature will show up, making things even more interesting. Landing the 5×5 yeti alongside smaller Gigablox reel combinations in this feature and win the maximum reward.

The wild is represented by a mountain covered in snow, and will replace all other symbols to form winning combinations. Wilds will not replace the scatters in this slot. Though the wild has no independent value, it can bolster your gameplay both in the base game and free spins.

How to Win at 90K Yeti Gigablox

Align three to six identical symbols on consecutive reels from left to right to make winning lines. However, with just two yeti symbols, you can earn a payout. Make the best of the gigablox summon and free spins features, as the bigger wins are likely to emerge from these.

We recommend playing the 90K Yeti Gigablox free game at a reputable casino that offers freeplay in demo mode. The majority of our recommended casinos provide a demo version of this slot for you to practice. Sign up at one of the top-ranking casinos found on this page to acquire a generous welcome bonus, which may also be used to play 90K Yeti Gigablox and other fantastic games.

4.80x your bet is the highest symbol win in the 90K Yeti Gigablox game, awarded for landing six yeti symbols. You will receive 2x your stake for lining six male or female mountain scalers on the reels. Sherpa and snow tent will provide you with 1.5x and 1.2x your wager, respectively.

Each of the pickaxe and mountain rope will award 1x your bet for six on the reels. The A card symbol rewards you with 0.8x your stake, while K and Q will each award 0.5x your wager. However, the J and 10 will only offer 0.4x your bet.

Our 90K Yeti Gigablox review has covered all of the various parts of this slot game, including the layout, kay stats and the 90K Yeti Gigablox RTP. The developer’s Gigablox mechanic takes the gameplay further up a notch. With the Gigablox Summon and free spins features you could bag yourself up to 90,000x your bet.

If you want to register at a casino to play this slot, we suggest making use of any of our highly rated casinos. They prioritize your safety and security whilst providing super-fast and reliable transactions. So register today and secure a sign up bonus!

Where can I play 90K Yeti Gigablox?

90K Yeti Gigablox is available at all of our recommended casinos. They offer a variety of innovative payment methods, secure gaming, cool bonuses and their sites are mobile-compatible.

Does 90K Yeti Gigablox have a free spins feature?

Yes. 90K Yeti Gigablox has a free spins feature that awards free spins and extra free spins. During the feature, either Yeti Giga Summon or Snowstorm feature might trigger.

Can I play 90K Yeti Gigablox for free?

Yes. 90K Yeti Gigablox free play demo mode is available at most of our recommended casinos. So real money is not required to play.

What is the volatility of 90K Yeti Gigablox?

90K Yeti Gigablox has a high volatility rating. The game can throw up some huge wins. But such results will be hard to come by.

What is the max win of 90K Yeti Gigablox?

Can I play 90K Yeti Gigablox on my mobile or tablet?

Yes. You can play this slot on iOS and Android smartphones and tablets. It is compatible with all browsers too, such as Chrome, Safari and Firefox.

This slot comes from a partnership between 4ThePlayer  and Yggdrasil Gaming.

What is the Return to Player (RTP) for 90K Yeti Gigablox?