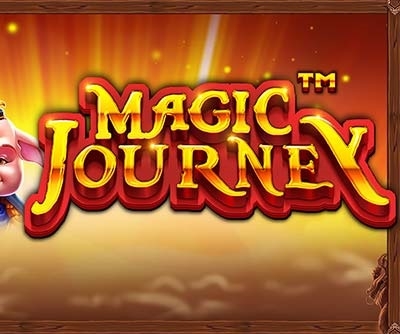 The Magic Journey video slot by Pragmatic Play is guaranteed to be different than any slot you’ve ever seen before. This game gives you chances for re-spins with a style of gameplay based around using one five-spot reel to create matching combinations on a separate 3×3 grid to get as many lines as you can for big wins.

An Introduction to Magic Journey

We’ve been covering the online slots industry for a really long time, and in that time, sometimes we really feel like there’s nothing else we could see that would surprise us all that much. However, the Magic Journey online slot by Pragmatic Play changed our minds on this because it really is a different kind of title.

If you like games with a great visual appeal and atypical styles of play while retaining quite a bit of action, then this is a slot you should definitely take a look at.

The overall aesthetic of this game has Asian influences with a number of character that look like they could come straight out of some sort of anime or manga cartoons. The graphics are of a particularly high-quality, and all of the symbols are animated. The soundtrack is great as well.

On the gameplay side, this is a title that is really outside of the box to the point that it’ll take you a few moments to see how it actually works. However, it’s not so weird in how it plays that it’s hard to figure out, and it’s actually very intuitive when you see a few spins and how the wins are chosen.

We’re going to explain the layout of the game here, but we’ll explain how this layout actually works in terms of functionality down below. Here’s what you’ll get:

We want to point out that this game has a pretty high volatility. It’s set up so that things are geared a bit more toward the top-end of the pay table, especially with the way the features and gameplay work, but things are a little anti-intuitive here because the hit-rate isn’t particularly low at the same time.

This creates a style of action that, when incorporated with this atypical approach to giving payouts, puts players in a position where they don’t really have a frame of reference to compare this game to. That can be a good thing or a bad thing depending on how adventurous you feel like being when you play this slot.

The thing to know about the Magic Journey online slot is that you’ll really want to understand how the payouts and gameplay work before you jump in. Otherwise, you might end up confused and not want to play. This is a solid title once you see how it works, and that’s what we want to explain to you here along with which types of features and payouts are available.

When you hit the button to spin the reels, the lower line of five symbols will spin initially. The upper area of three symbols by three symbols show all eight of the total symbols in the game.

Each symbol you get on the bottom set of five will match its corresponding symbol in the upper area and highlight it.

Your wins (and feature activations), as you will see when you play, are determined by which symbols are highlighted in the upper area. You have to get three highlighted symbols in a row to get a winning line, and you can earn up to eight winning lines at once for wins that are shown on the pay table as a whole.

Instead of being paid based on winning combinations of specific symbols, you’re instead paid for how many filled lines of highlighted symbols you can get in the upper area. There are eight ways to win with three horizontal, three vertical and two diagonal in the 3×3 area, much like tic-tac-toe.

One thing we want to note before we get into the features is this: There are blank, brown wooden symbols that appear on the main reel. They don’t count for anything. As a result, it is possible, though unlikely, to get a whole reel full of those brown symbols so that you don’t match anything up top.

The real value in the Magic Journey online slot comes from getting as many lines as you can on the upper grid. The re-spin feature helps you to do this, and there are two ways to get it:

When you activate this feature, what happens is that all of the highlighted spots stay in place, but you get to spin your reel once again. The more new paylines you add, or the more re-spin symbols you get, the more re-spins you get to have over and over.

This feature is responsible for a lot of volatility because you can go from a single win (or no wins with the re-spin symbol) to very quickly filling the entire grid of symbols and hitting the top payouts.

It also adds a lot of action to this title since it is activated every single time you get a payout, even if it’s one of the lower-level ones.

How to Win at Magic Journey

The Magic Journey video slot is the kind of game that a lot of players like in the sense that there are no traps that will lower your RTP. You sometimes see this with some titles where you have to keep a certain number of paylines available or you have to wager a minimum amount to qualify for some kind of jackpot.

Since that’s not an issue in this particular slot, all you really need to do is pick a bet size that you’re comfortable with and go from there. Since the volatility is so high, you may want to drop down slightly from your usual bet size to help keep the swings reasonable, and that’s helped by the fact that this is a faster game than most video slots, so you’ll get in more spins during the same length of a session.

You get wins in this game based on how many of the eight lines you get on the 3×3 upper grid. Here’s what you can win:

We really want to make sure that we point out that all of these wins are multiples of the total bet size and not of any coin-based payouts.

You’ll also notice that there is no payout for making seven lines. That’s because it’s not possible to only have seven lines made on a 3×3 grid and not have the eighth.

Pragmatic Play did something special with the Magic Journey video slot with how they used a much different approach to payouts and the layout than what you normally see. The volatility is pretty high, which means you get better chances for larger wins at the expense of smaller ones, and the re-spin feature helps you to get bigger payouts than you would have otherwise.

Overall, this is a title that deserves to be tried out because it shows that there is so much more that can be done with online slots than what’s popular right now.