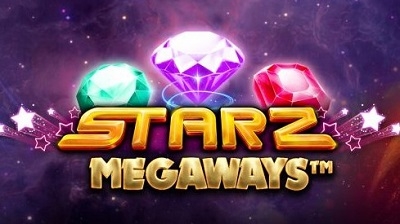 The Starz Megaways video slot brings players into a space adventure with tons of galactic imagery and tons of ways to win. The total number of ways to win can be in the six figure range in this game, and you can also have expanding wild symbols, free spins and other value-packed goodies.

An Introduction to Starz Megaways

With the Starz Megaways online slot, we see something from Pragmatic Play that puts a focus on gameplay over having some kind of already popular theme. Instead, this gem- and space-themed title gives you plenty of aesthetic appeal while giving you a focus on the play experience and features.

If you’re the type of player who cares more about action than playing a game based on a television show, movie or video games, then you’ll get a lot out of what they have put together here.

The look at this title has is similar to some other titles that you may have seen in the industry as a whole. It’s really serious in terms of giving players an overall impressive look.

On the gameplay end, you’ll see that the focus is on the regular pay table and how things go in the normal game mode. While there is a value-oriented bonus feature, it’s not necessary to trigger it in order to have a pretty good winning session.

The layout here is the focus of what’s going on with this game, so we want to make sure that you understand it as clearly as possible. Here’s what to expect:

There are a lot of options to really customize your bet sizing here, and you have tons of ways to win, so action is the name of the game. With that said, the volatility is on the upper end of the low range (or the very low end of the medium range), so that gives you some leeway with choosing bet sizes as well.

The features in the Starz Megaways online slot are a bit different than others that use this same format. That helps to make it its own unique title and experience instead of just seeming like another similar game in the sub-genre.

Wilds have an interesting effect on games with an “all ways” approach to determining winning combinations, which includes the Megaways titles even moreso because it can help to create wins in so many different ways at once.

In this slot, the wilds are large stars that consist of yellow and red points over each other. It’s probably the most important symbol in the game, and the way it behaves is the reason why.

Every time a wild appears, it will expand to cover the entire reel. It does this by replicating itself to cover every spot on the existing reel.

There are a few things to know from this. First, if it covers up a scatter, then the scatter will still count for bonus round purposes. Second, the number of wilds that you get on a column will be determined by how many symbols were on that column to begin with, which means you can pick up anywhere from two to seven of them at a time.

Furthermore, it’s important to note that the wilds will not count for scatters. They also only make appearances on the second, third, fourth and fifth reels, which means that you will not have winning combinations available that only consist of the wild symbols.

The bonus symbol is a glowing sun, and it appears on all six reels. You only need three to trigger the bonus feature, however, but the more of them you get, the more free spins that you are awarded.

It’s important to note that you cannot re-trigger this feature, but that will be okay once you understand how it works.

Every single time you get a wild, it will expand to cover the entire reel normally. However, it will then stay in place for the entire duration of the rest of the feature, which means that you have a much better chance of ending up with multiple reels full of wilds. In turn, that allows for some pretty massive wins.

In fact, the chances for enormous wins are so good that they had to cap the most that you can pick up in this bonus round. If you hit a total win of 10,000x from a single free spins bonus feature activation, then the feature is immediately over, and all remaining free spins for that activation are removed.

How to Win at Starz Megaways

Despite the notion that there is no strategic depth at all when it comes to video slots, the Starz Megaways online slot shows that this isn’t generally the case. Your bet sizing and speed of play are definitely factors that you can control that will affect the outcome and feel of your sessions.

The volatility in this game is pretty low, and something that does is that it creates the opportunity to use a larger bet size than you normally would. There are two things that this does. First, it means that you get better chances for big wins, especially considering how much value the free spins feature can bring with the sticky expanding wilds.

Another aspect to this approach is that the volatility is low enough that the swings will not be bad at all even if you go to a bet size in the range of 50 to 75 percent higher than what you normally use.

The pay table for this game breaks down into two groups of five symbols each, and that’s considering that the wilds and scatters do not offer their own payouts.

At the lower end, you have five different planetary symbols with neon presentations. The yellow and red pay 0.5x for six of a kind of either. Six of a kind combinations of the green, golden or orange symbols pay out slightly less at 0.4x.

Pragmatic Play’s Starz Megaways video slot brings players into a situation where the hit-rate is extremely high, and it’s made even larger by the expanding wilds. With the free spins keeping these full reels of wilds in place for multiple spins, there’s a ton of value there as well.