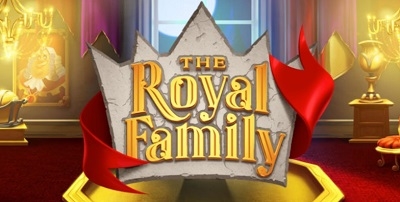 You’ll be taken back into medieval times in The Royal Family video slot by Yggdrasil Gaming. This title centers around three different ways to trigger a free spins mode with extra features in addition to having a chance for all upper level symbols to turn into wilds during the bonus round on every single free spin.

An Introduction to The Royal Family

Royalty has been something that people have been interested in for a long time. The idea that there is a family in charge of a country or region is an interesting one from the past, and The Royal Family online slot brings a humorous and colorful concept of that to the reels.

You’ll find that the whole idea isn’t taken incredibly seriously here, and there’s a fun style of animation used to convey that.

Visually, the symbols are all drawn in a way that looks great while still having a bit of a funny slant to it. All of the top symbols are also stylized like playing cards with their rank in the upper corner of the symbol, which throws the concept of card ranks being the lower-tier symbols of a slot on its head.

The gameplay is feature-based with everything centering around the free spins mode. It’s pretty easy to get with three different ways to earn a shot at the bonus round.

Yggdrasil is really good about making sure that players have adequate betting options, and you’ll see that in this game as well. Here’s what to expect:

Wins in this game are based on numbers of coins being won and not the total amount of the wager. Some of the wins can seem slightly on the small side until you remember how much value the free spins give and how often you’ll trigger them in this game.

Free spins are the main feature in The Royal Family online slot, but there’s a lot more to see than just that. We’ll jump right into it.

The lady court jester dressed up like a joker is the wild. She appears on all five reels and can be transformed from the four high-ranking symbols during the free spins mode as well.

Here are the payouts you’ll get from this lady:

The wilds are a key component of the game overall and are the reason why the free spins are so incredibly value-packed, but we’ll get to that down below.

The trophy symbol is a scattered bonus symbol that appears on all five reels. It can give you wins along the following lines:

This is just one way to get free spins in this game. There are actually a couple of others.

Different feature prize symbols can appear on any spot during the regular game. When it does, it’ll fill one of the two shield banner spaces below that reel. When you have two collected on the same reel, then you will activate a free spins feature with a minimum of at least eight free spins with those two additional features added on.

You can get low-level feature prizes that allow you to start with up to three sticky wilds, up to three additional free spins or to have one low-paying symbol removed from the game board.

Rare feature prizes are also available. They give multipliers as high as 4x along with up to nine extra free spins, two starting reels completely wild or up to six randomly placed sticky wilds on the game board.

There’s a royal chest full of gold and jewels sitting on a blue pillow, and it shows up on the fifth reel only. This symbol is all that needs to appear to activate the free spins mode in The Royal Family video slot in yet another way.

When you get this symbol, you can win a random prize of between 100 and 2,500 coins or between eight and 24 free spins.

If you pick up the free spins, then you’re given additional features as well to add to the value of the bonus round. This includes up to four additional free spins added to your total and between one and three extra sticky wilds that are added to the game board as soon as you start playing.

No matter how you trigger the free spins mode, you’ll have a couple of features that happen during it that adds an overwhelming amount of value.

What this means is that you get a lot of chances to add wilds to the reels, and these wilds stick around to give you more and more value.

How to Win at The Royal Family

Maximizing your strategy in this game is all about exposing yourself to as many chances to hit the free spins mode as possible. To do this, you’ll want to get in as many spins as you can during your sessions, and a good way to make that happen is to drop your bet size a little and simply play faster.

Two ways to play faster are to use the spacebar to rapidly spin or to use the autoplay feature.

Payout Structure for The Royal Family

The four royal symbols are the best paying symbols in the game other than the wilds. Five of the blue knight ace earns you 250x, and you can pick up 200x for five of the red king symbol. The purple queen yields 175x for five, and you’ll get 150x for five of the green jack.

The low-tier symbols in this game are the four card suits. The blue heart, red club, purple spade and green diamond pay between 70x and 40x for five of a kind combinations.

With The Royal Family video slot, players are put into a position where they get a few different ways to be taken into a very powerful bonus round with lots of opportunities to run up plenty of wins. Not only that, but the average win will be larger than it would be in the regular game mode because of the sticky wild and other features.

This game stands out for giving players real opportunities to hit the free spins mode multiple times during their sessions, and it looks great at the same time.