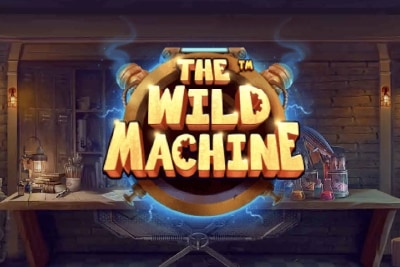 The Wild Machine video slot by Pragmatic Play brings players into the workshop of a crazy inventor. You’ll see all kinds of inventions by this protagonist, including the reels in front of you that award multiple options for free spins with a value-oriented pay table with a high hit-rate.

An Introduction to The Wild Machine

The Wild Machine online slot is a good example of Pragmatic Play opening things up a bit on the format side while using an entertaining theme. This is a double-sided way of keeping the game interesting and giving players a lot of interesting things to check out.

We’ve seen some games with similar types of themes from other developers before, but the gameplay style stands out in a huge way here.

Visually, it’s a game that’s as good as anything else you’ll find from most top developers. The background is interesting with a lot going on, and the icons that show up on the reels fit perfectly with that overall theme.

With all of that said, it’s the gameplay that will get the most attention from players who really get in and check it out because it has a format and feature set that combine to give a whole lot of action.

The format is obviously a bit different than what most players are used to, and you can tell that the first time you look at the game. Here we’ll break down exactly why that is and what you can expect:

A key thing to understand is that the four covered symbols at the top, bottom, left and right of the reels can become uncovered in the free spins mode to give you chances to get up to seven of a kind with your wins. With this dynamic, the game gets really interesting really quickly.

The variable format with the four extra spots we noted above changes the nature of the experience a bit. We’re going to show how this works and how all of the other features revolve around this one aspect of the game.

The big golden wild symbol appears on all seven reels. It gives you opportunities for some of the biggest wins in the game, and like all other payouts, the payouts for the wilds are listed as multiples of the overall bet size.

There’s a scatter symbol in The Wild Machine online slot that simply says “SCATTER” in large, gold letters in front of a glowing device. This appears on the second, third and fourth reels only, and it will only appear in the regular game mode if the game is in the regular 5×5 layout.

The Wonder Wheel feature is activated if you get all three of these symbols on the game board at once, and this means you get chances for instant wins or free spins. Your cash payouts are added up during your spins on this wheel, and they’re all paid out as a single lump sum at the end of the feature.

When you’re given a set of free spins, you actually get to choose between two options.

The first option is the Gold Foundry mode, which gives eight free spins with between two and five reels randomly filled completely with wilds. This mode keeps the game in its standard format with five reels and five rows, and it’s more geared toward a lower volatility and a higher hit-rate for wins.

The second option is the Diamond Forge mode. This gives you play in the fully expanded mode with all four blocked symbols removed for seven reels of play. The first, last and middle reels are guaranteed to always have wilds for every spin, and you’ll have five spins in this format. The volatility is a little higher for this game mode, but you have opportunities to pick up bigger wins.

Something else worth mentioning in the Diamond Forge free spins mode is that the wild symbols are sticky and will stay in place for the remainder of the feature.

During the regular game mode, you have a random chance for four blocked symbols to disappear to give you a shot at larger wins with seven reels. When you do this, the first and last reel (each of which is only one symbol) are guaranteed to be wild. Moreover, the middle reel with its seven symbols will be full of wilds as well.

This is definitely a value-oriented feature that adds a layer of excitement that you can’t really find with games that stay in a regular format.

How to Win at The Wild Machine

In The Wild Machine online slot, you’re basically given a choice between a couple of different volatility options with the features. With the Gold Foundry, you’ll have a higher hit-rate, a lower volatility and a lower average win for each payout. However, if you go with the Diamond Forge, your wins will be larger on average with less of a chance of hitting them and a higher volatility.

It’s up to players as to which you choose. However, we would recommend players go with the Diamond Forge option if they want to see the expanded layout in its full effect.

Payout Structure for The Wild Machine

The pay table for this game has five spots after the wild symbols in the upper end with five in the lower end. Each symbol has a special win for seven of a kind, but other than that, it follows the usual structure. The crazy professor, for example, pays 175x for seven of a kind or 25x for five.

The bottom end of the table is rounded out by four card suit symbols that look tremendous in this style of animation. The pays are all the same for the blue spade, yellow club, green diamond and red heart at the 12.5x/2.5x levels.

Pragmatic Play did a good job in The Wild Machine video slot of riding the line between creating something that’s fundamentally different and keeping things similar enough to other games that it doesn’t alienate players. The feature set and regular gameplay are both seriously fun, and the graphical style looks amazing as well.

This is a game with a style of play that will appeal to a whole lot of players, in particular because you get to choose your volatility level in the bonus feature.